Blue cheese and feta are two interesting additions to any cheese platter, and definitely something you should try at least once in your life. Sometimes you may think they taste very similar, but you definitely notice they look nothing alike. Why is that ?

What are the main differences between blue cheese and feta, aside from the mold ? Well, it turns out they’re so different the only things they have in common are a sharp, salty, tangy taste. 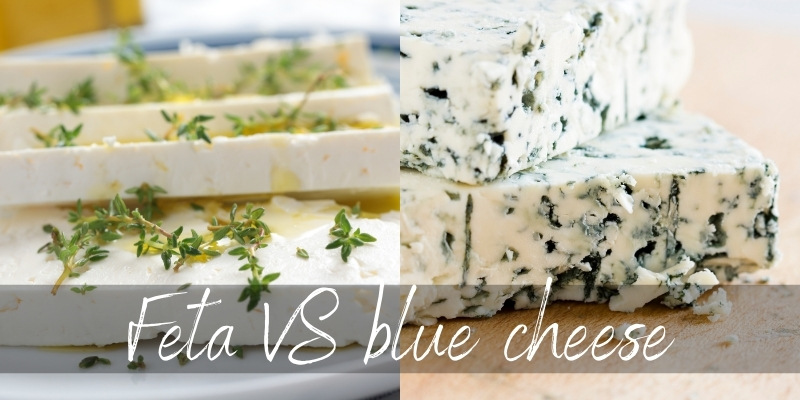 Blue cheese has mold spores added to it while feta does not, and this leads to very different flavors. Feta is a brined cheese made of sheep and goat milk, which is where the salt and tangy taste come from. Blue cheese can be made from any milk with a high fat content, as long as there is Penicillium mold added for the flavor to develop.

There’s an entire process to making blue cheese, and it’s very complex, mostly because the mold growth needs to be kept under control. By comparison feta is much easier to produce, and simply needs to be aged in brine.

There are several more differences between feta and blue cheese, but those are the biggest and most obvious. Next we’ll talk about each difference in particular, so you understand why some pasta dishes have blue cheese but not feta, and how each is made.

1. Blue cheese has mold, feta does not

The first and biggest difference is the presence of mold. Obviously blue cheese has mold, and it gets its name form the blue-green veins of Penicillium mold growing within the cheese. Some blue cheese types, like Gorgonzola, have those veins created artificially. very thin metal rods pierce the cheese rolls when still soft, so that there are dozens of airways for the mold to grow through. 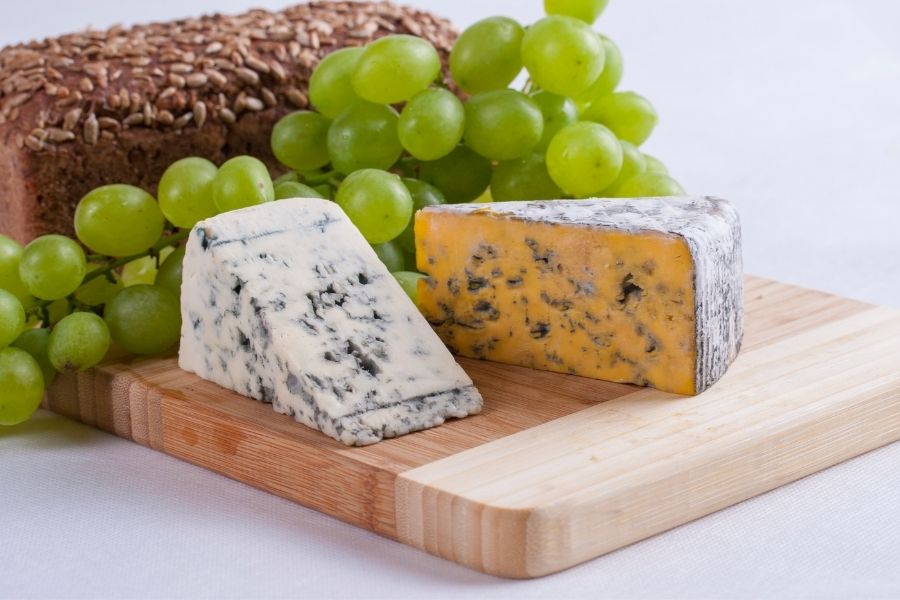 Other blue cheese like Stilton have the mold inoculated from the beginning and it radiates from the middle towards the outside.

Each and every blue cheese version is interesting in its own way, and some of them have a protected denomination. This means that for example a roll of Gorgonzola cannot be named that unless it is produced in a certain area in Italy, under certain circumstances using very specific methods. Blue cheese is kind of a big deal, and this applies to all the big blue cheese names.

Feta on the other hand has no mold added, and as such is a simpler piece of cheese. It has an amazing flavor on its own, but does not have as much competition as blue cheese.

You may be wondering how blue cheese and feta get similar flavors if one has mold and the other doesn’t. Well blue cheese gets its sharp, salty flavor from being aged and because of the way the mold itself.

Feta gets a salty, tangy flavor because it’s brined, and because it’s made of sheep and goat milk, and both have a pretty strong taste.

2. Feta is a brined cheese, blue cheese is aged in caves

The means of production for both cheese is very different, but the way they’re aged is also different. Really, these two have barely anything in common.

Let’s start with feta. After the curds have been compressed into blocks, they are then left to maturate in barrels of brine. This can go on for weeks or months, depending on the region and the producing company.

Blue cheese is aged in caves, after the curds are inoculated with the mold. The caves provide an optimal amount of moisture and the right temperature for the mold to freely spread throughout the cheese. This usually takes 3-4 months. In some cases it’s not a cave but a very well maintained room in terms of temperature and moisture.

3. Blue cheese can be any milk, feta is sheep and goat milk

Since there are quite a few blue cheese options out there, each chose to make their own mark. You can find blue cheese made of goat, sheep, cow, and buffalo milk in any combination.

Meanwhile feta has a specific milk profile, with 70% sheep and 30% goat milk. This gives is more of a bite and once it’s brined it gets even stronger.

4. Feta is much simpler to make than blue cheese

Because blue cheese has that mold structure, it really needs to be kept under control. When blue cheese is made, a lot of thought and effort is spent to make it safe to eat, and to make sure the mold is a harmless, edible kind.

Some blue cheese have the mold added right into the milk, some have it added to the curds, and some add it to the already pressed and set cheese, but before it’s set to age. All of these processes require a delicate balance between letting the cheese do its thing and interfering to change its course when necessary.

By comparison, making feta cheese is simpler, and involves fewer steps. The most care needs to be taken when the cheese is brined, to ensure the right salinity and to check on the cheese every now and then.

5. Blue cheese has a disputed origin, feta is a Greek cheese

Blue cheese has several short stories that run around the world as its history or starting point, but they’re all heavily disputed. Most of them in involve a shepherd or cheesemaker in the Middle Ages who, for some reason, abandons a piece of cheese in a cave. Sometimes for a woman he saw, sometimes he was drunk and fell asleep.

He then returns to said cave and finds that his cheese has grown mold. Now, where and exactly how this discovery was made is still up for debate. What’s certain is that the mold spores used in making blue cheese are named after the Roquefort region in France. Whether that means France has the loudest voice or that the original blue cheese is actually French is still unknown.

On the other hand, feta is well known as a Greek cheese and its only competitor is the Cypriot halloumi. They are both made of the same milk, use rennet, are aged in brine, and taste heavenly. The only difference we could spot was the gummy, softer texture of halloumi. Feta is drier by comparison. 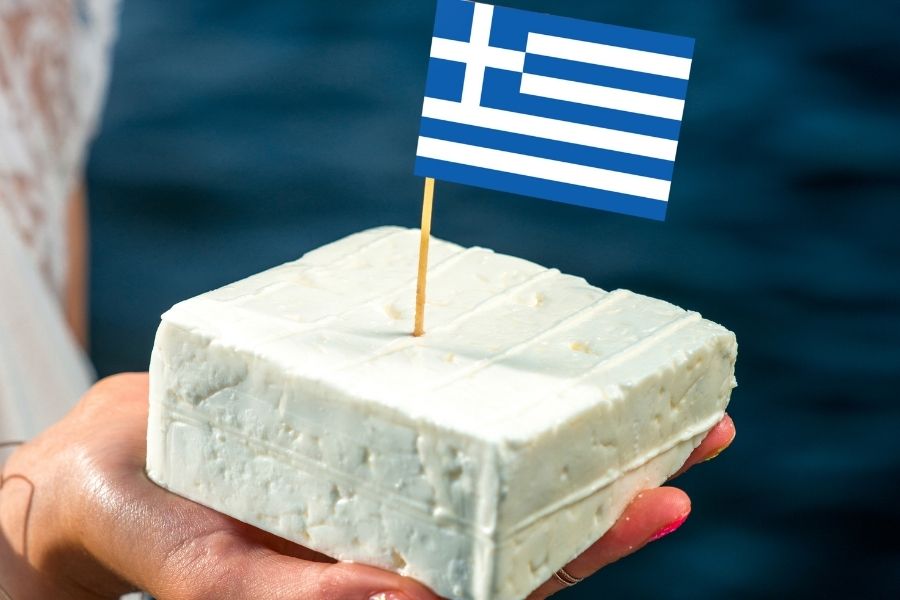 Both feta and blue cheese can be crumbled onto a topping, but they do so differently. Because blue cheese tends to have a high fat content, it’s also creamier. So if you ever go and pinch a piece of blue cheese, it will be rather creamy and break away in clumps. This makes it melt nicely on top of a pizza, or into a pasta sauce.

As for feta, it does get crumbly but into smaller, separate crumbs that do not really clump together. So if you want to melt it, you’ll be very disappointed.

Both blue cheese and feta are salty and tangy

In terms of flavor both blue cheese and feta will give you that salty, tangy kick you may be looking for. But depending on what you’re cooking one may be better than the other.

So for example if you’re looking to make grilled cheese, then feta is the way to go. We mean actual slices of cheese on a grill or in a skillet. if you want a real fancy grilled cheese sandwich you can definitely use blue cheese, and it may even have time to melt a little.

If you’re wondering about the mold in blue cheese, don’t worry about it. It’s a strain of mold that is harmless in small amounts, but it can go awry if you keep it in the fridge for too long.

Blue cheese is expensive because of all the safety measures taken to make sure the mold doesn’t overpower the cheese and is safe to eat. Even so, if you suspect your blue cheese has gone off, look at the mold. If it fuzzy ? Do you see patches of mold that are any other color than blue-green ?

If yes, then throw it right out, it’s not the kind of mold that’s safe to eat.

Can you substitute blue cheese for feta ?

You can try substituting blue cheese for feta in almost any dish, since the overall effect is the same. There’s a catch tho, feta is way saltier than blue cheese. So if you want to sue feta instead of blue cheese in a cheese platter, it may be too salty for grapes or walnuts or a bit of jam.

In a salad it will work very well, as well as in a sandwich or crumbled into a sauce.