Well, you would get surprised how many people actually have such a specific taste when it comes to cheese. Emmental has a strong flavor for those of us who like our cheese light.

If you prefer your sandwiches without Emmental cheese, dislike the taste, or wish to try something new in your cooking, there are many options that can serve as alternatives. And yes, this list includes some vegan options, so don’t worry if you prefer your diet to be plant-based. 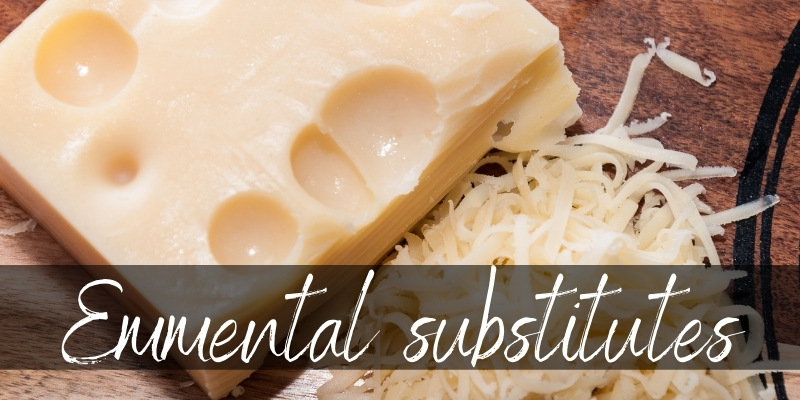 Emmental is a very mild, neutral cheese so good substitutes would be Gruyere, French Comte, or Jarlsberg. You may also try  slightly aged Provolone, Havarti, or mild Cheddar.

But you can basically use any cheese if you aren’t very picky. So other options include regular Cheddar, Gouda, Parmigiano-Reggiano, or Brie. If you wish to switch to some vegan alternatives use Violife Original or vegan Cheddar.

If you are making some sandwiches for a party, feel free to use any cheese you can get your hands on. But for some advanced dishes, you will need a specific cheese to match the recipe.

Maybe you are an experienced chef and enjoy cooking and baking for the entire family (or just yourself). We have gathered the best alternatives to Emmental cheese for you!

Read also: Cheese That Doesn’t Melt – Why It Happens, And Examples

What can be used instead of Emmental cheese?

Emmental cheese (also known as Swiss cheese), it is very popular and highly used. It is considered medium-hard and it has a savory taste which most people like.

Fun fact: Emmental became popular for its holes, but the holes in cheese used to be considered mistakes and were avoided.

For this (w)hole reason, Havarti may be the closest you can get to Emmental. While Havarti is a Danish cheese, it’s still got a similar consitsency and will definitely stand in for Emmental.

Emmental is often used for making fondue due to its nutty flavor. You can also use it as a topping on pizza but it is not on the top of the list of best choices for that.

It is said to go well with wine so if you are planning a party, get your hands on some Emmental cheese. However, if you can’t find any you may swap it for some Gouda. Just keep in mind that this one is sweet, so it works best with a dry wine pairing.

Emmental can be used in many recipes because it has a milder taste, but the subtle tone of acidity and sourness does not appeal to everyone.
If that is the case, you can opt for any of these diverse substitutes, so let’s start with the fancy ones!

Gruyere cheese also originated in Switzerland and tends to be more on the saltier side. It does change with age though. It is creamy in texture and has a nutty flavor that is very similar to Emmental cheese which makes it the best substitute.

However you should note that Gruyere is harder than Emmental, so try and find one that isn’t as aged if texture is very important.

Gruyere is the best cheese to bake with, since it has a distinctive flavor to it but is mild enough it won’t make everything taste like cheese. It is great for melting and can be used for fondue because of this property. It can be used in soup, and the French use it in their famous onion soup.

You can always use it in sandwiches as well, and it goes well with chicken and ham. Salads and dishes with pasta also welcome the taste of Gruyere. If you are using this cheese, make sure you serve it with beer or a cider instead of wine since it compliments the taste. 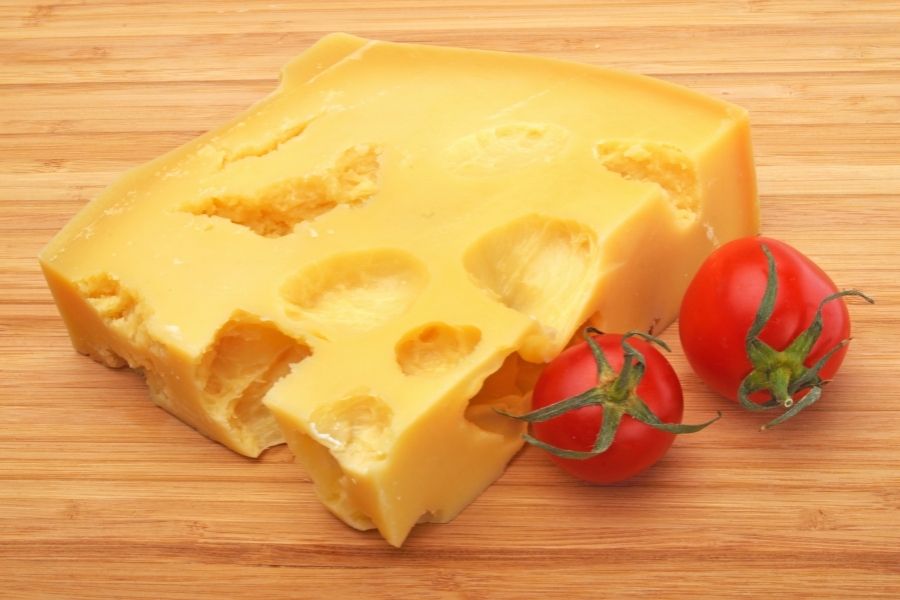 French Comte comes from the region of the same name. It comes from unpasteurized cow’s milk. It is a hard cheese but flexible in its texture with a mild taste that tends to be a bit on the sweeter side. Its nutty extra flavor is also similar to Emmental cheese and can be used for cooking.

Whether it is a simple plate of mac and cheese or a fancy dish, Comte is a perfect choice. It is so firm you can cut it into cubes, slice it, grate it to top your pasta dish, or just serve it with toast.

Jarlsberg cheese can also be recognized by its holes, or ‘eyes’. It comes from Norway and is a semi-soft cheese compared to the ones mentioned above. It is made from cow’s milk and can be used on its own as a snack or in cooking.

In terms of flavor, it’s very mild, with a softer, sweeter undertone and a nutty finish. It can also be described as soft and buttery.

During the process of production, bacteria release carbon dioxide when they feed on the lactic acid in cheese. This creates the bubbles that are the holes in the final product. This is also what happens in Gruyere, Emmental, Havarti and any other cheese with ‘eyes’.

You can use Jarlsberg cheese to make sandwiches, souffle, and dips so it is a very recommended substitute due to its variety.

Cheddar cheese is a relatively hard cheese in its consistency. It has a yellowy-white color and it takes about two years for it to age completely.
It originated in the United Kingdom in the village that carries the same name. It is also by far the most popular cheese in the UK and it is produced all around the world.

It is firm but mild in taste and can even melt in your mouth, while its flavor is similar to the flavor of hazelnut.

When substituting for Emmental, look for a mild, young Cheddar. Aged Cheddar will have a flavor that is too developed. Do not get orange Cheddar as it contains annato, and the flavor will be very far from Emmental.

You won’t get the same texture as Emmental with Cheddar, even a mild one, because it’s made differently. Still, if this is your only option then get a mild, young white (or pale) Cheddar.

Gouda cheese originated in the Netherlands and it is very distinctive in its color. It is yellow, almost orange, made from the cow’s milk. It is one of the oldest cheeses and a huge part of the Dutch culture and legacy.

It is named after the city Gouda because of the history with trades, but it was not produced there. It can be used for sandwiches like any other cheese, it goes well with wine, grapes, or some stronger drinks since it has a sweet taste. The longer it ages, the sweeter it is.

Parmigiano-Reggiano is the first Italian cheese on our list. The Italians take their cuisine very seriously and are experts in pizza and pasta dishes. So cheese tends to have a big role in any Italian’s kitchen.

Parmigiano is usually the words we all use when talking about Parmesan, but while the original Reggiano is Parmesan, not every Parmesan is Reggiano.

It is so popular and delicious it earned the famous nickname King of Cheeses. So this makes it a great substitute for any cheese.

Just keep in mind that this is a very different cheese from Emmental, and will behave differently in your dish. Parmesan is a hard cheese, and has a very strong buttery, nutty flavor.

It may be best to pair Parmesan with another Emmental substitute. Or, you may use it on its own just know that you will need to keep everything else in a mild flavor.

Brie cheese is soft and pale with a moldy rind that can be eaten. The flavor depends on its production and the ingredients.

If it is overripe it is creamy in texture, while it is usually bouncy and firm on the outside. It is usually served with nuts, fruit, or wine.

While Brie is a very mild cheese in flavor, its texture is much softer than Emmental. It will work best in recipes that ask for melted cheese, or on a cheese platter. 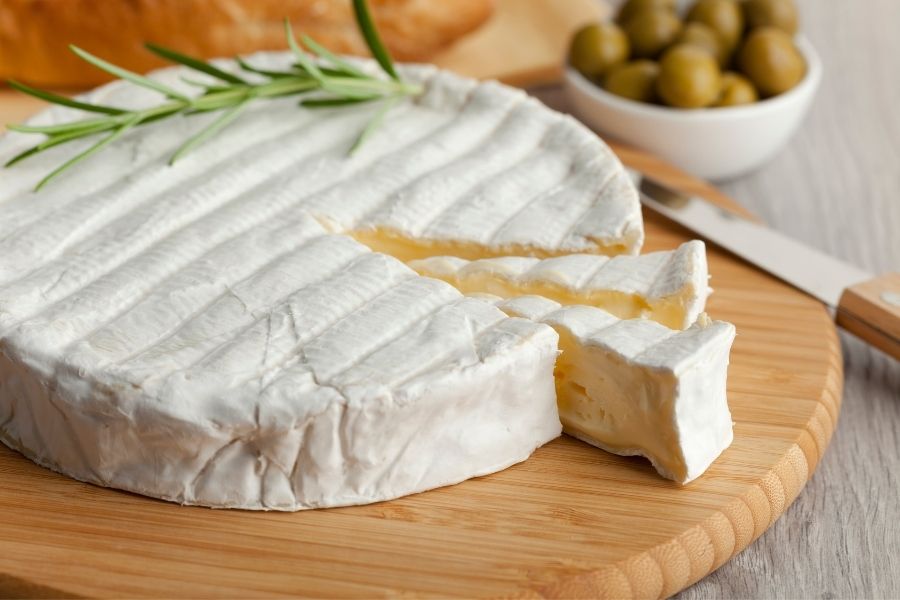 This vegan option is often used in sandwiches, for grilling, or as a snack. It is made with coconut oil, starch, salt, and doesn’t have any genetically modified ingredients.

It can be used as an alternative for any of these cheeses if you prefer the vegan diet but still like the taste of cheese.

Vegan Cheddar is served with crackers, pizza, and toast. You can make it at home with ingredients you can find easily, such as cashews.
It is made with agar agar powder and the process is pretty quick and fun. You can serve it with wine, olives, grapes, or toast.

How to use Emmental substitutes in recipes

If you wish to find the perfect substitute for every dish then pay attention. Gruyere, as the best substitute on our list, can be used instead of Emmental cheese in soups, dips, salads, and it can be served with wine, no matter which one you prefer.

Gouda can be great if baked or cooked with meats that tend to be sweet like goose or duck meat. It works well with fruits and can be served with liquor or red wine. Brie can also come in handy in these recipes.

Cheddar can be paired up with nachos, any other foods you wish to dip in cheese that has a rich flavor, and is amazing if served with vegetables like carrots or Brussels sprouts.

Jarlsberg is very similar to Emmental cheese, so use it if you have it for any recipe that recommends Emmental. Since it is hard it can be added as a side dish and even goes well with fish, pasta, rice, and toasted bread.

Parmigiano-Reggiano is best served on pizza or pasta. You can use it with recipes that include beef, poultry, pork, or simply use it as a salad dressing.

The vegan alternatives can be used at any time, there aren’t as many, especially if your country isn’t very vegan friendly. They go well with vegetables, fruits, or if you like to pair up vegan cheese with some meat – serve it with meat that isn’t as light in taste. We would say no to poultry, but yes to beef.

You can combine more types of cheese as well, or use any cheese for sandwiches – even though Parmigiano-Reggiano might be a bit too fancy for your snack!