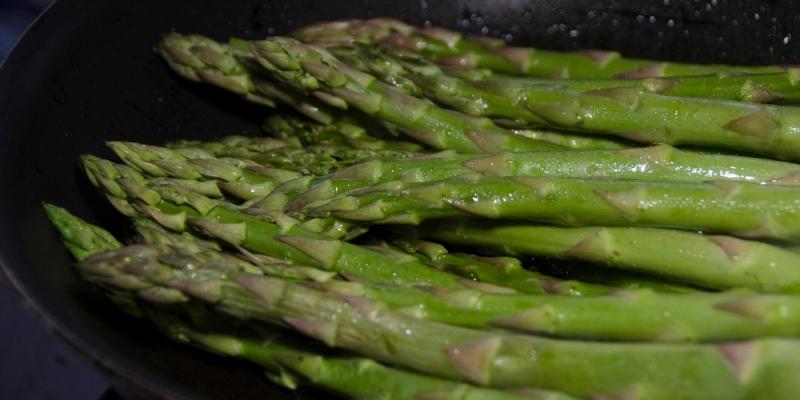 Table Of Content show
1 Why is asparagus stringy ?
2 How to get the best asparagus texture
2.1 Cook asparagus within 24h of buying
2.2 You may or may not need to snap the asparagus
2.3 Add moisture, cover the asparagus in the first half
2.4 Allow about 20 minutes on medium-high for full cooking

Why is asparagus stringy ?

Cooked asparagus can be stringy due to their cell structure changing, and them losing their sugars. This process starts one the asparagus is harvested, and continues during storage. It starts from the stems (where it was cut off) and continues towards the tips. This is why most people recommend you snap off the tough ends, to avoid the very stringy/woody parts.

The longer asparagus is stored after harvesting, the higher then chance that the stems are going to be stringy. Look for the freshest asparagus you can find, especially if you have a farm nearby. Cook the asparagus as soon as possible, don’t store it for a week otherwise the spears will continues to toughen.

How to get the best asparagus texture

There are a few things you can do to make sure you get the best texture for your asparagus, but even so you need to remember that cooking is a bit of science and it has many variables. When it comes to cooking asparagus, the variables are how tough the spears are, your cooking temp, lid or no lid, grilling vs steaming, how long you cook the spears for, and your general cooking skill.

Below you’ll find some pointers on how to maximize your odds of getting tender but not limp asparagus spears. Some of these may sound obvious, some may not, but they’re here to help.

Read also: Why Are Green Beans Stringy And Squeaky ?

Cook asparagus within 24h of buying

The longer the spears sit after they’ve been harvested, the stringier they become. This starts with the bottom ends, which is why you’re meant to check those ends before deciding to snap them. Sometimes they’re still good, they’re just a little tougher. We’ll get to those in a minute.

If you do need to store it until tomorrow, wrap it plastic (if not already) and store in the fridge, or in the crisper drawer. Don’t store it for too long otherwise you’ll get those slimy patches on the ends. If you do get them, I recommend cutting that part off, don’t attempt to eat it.

Read also: Why Are My Beans Hard After Cooking ?

You may or may not need to snap the asparagus

What to do with the ends of the asparagus spears is a war-waging topic. Sometimes I snap them off, sometimes I don’t, and I know some like to cut them off instead, while others keep them on. The whole reason some people snap off the ends is because the longer they sit the tougher the ends become. But not all asparagus needs to be snapped !

The best way to figure this out is by looking at the ends, noting the color, and trying to bend the ends. When the ends have become too tough, they’re very pale (almost white) and they are tough if you pinch them between your fingers. Try to bend it and it won’t easily bend. When the ends are like that, I snap them off.

Sometimes though, the ends are still green, not pale, and they have a bit of give to them if I try to bend them. Those I don’t snap. At worst I cut them 1 inch lengthwise, to help them cook through a little easier. This has a lot to do with how the asparagus looks, if the tips are way thinner than the ends. Generally very thin asparagus is tender from tip to end.

And sometimes, the ends are still tender but much wider than the crown. So I snap or cut those off, and still cook them, but separately so I can let them cook for longer than the rest of the asparagus. 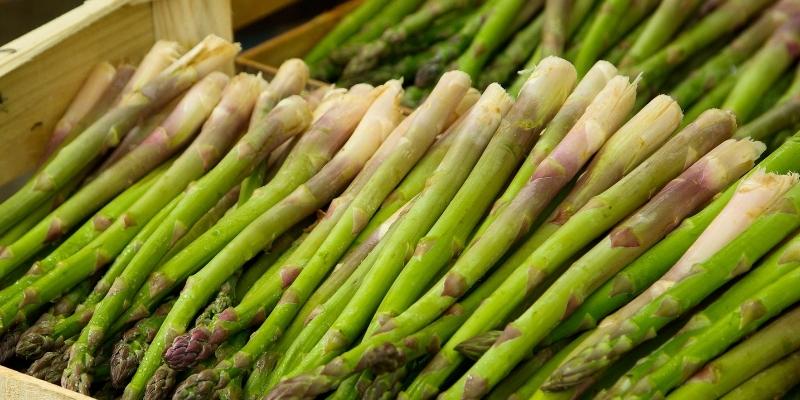 The paler ends are the woody, tough ends.

In the end it’s up to you which route you want to go. When I do snap my spears I keep the ends in a bag in the freezer, so I can use them later in a soup (creamed or traditional).

You can also keep the tougher ends and cook them alongside the rest of the asparagus, but they will need a few extra minutes to soften. As long as they’re off the rest of the spear, cooking them separately for longer won’t be a problem. Not all the ends of the asparagus are going to be inedible (too tough), sometimes they’ve just started to turn. Generally the paler the ends, the tougher they are.

Wondering how to snap asparagus ? Take the woody end, and slowly work your way up the spear, trying to bend it. The closer you are to the tip, the easier it is to snap, but that is not the goal. The goal is to find where the woody end starts to taper off and the tender part starts. It will snap quite easily, you don’t need a lot of force. Some spears will snap lower, some will snap higher.

This isn’t highly scientific by the way, but it’s the way I snap mine (when I do) and they come out just fine.

Add moisture, cover the asparagus in the first half

Asparagus can be a bit tricky to cook, much like zucchini actually. It’s a high-moisture veggie, but it does not release water immediately as a mushroom does. To get the best texture, use a frying pan or skillet that comes with a lid. Add your asparagus to the hot, oiled pan, and add a tablespoon of water to the whole thing. Put the lid on, leave undisturbed for about 10 minutes (it won’t be done yet).

The point of this is to steam/cook through the veggie, and sear it at the end when you remove the lid and allow the moisture to cook off, leaving you with nicely browned spots and tender asparagus.

Read also: Why Are Brussel Sprouts Bitter ? Can You Fix Them ?

Allow about 20 minutes on medium-high for full cooking

Not all asparagus spears will cook at the same time, but they will be done within 1-2 minutes of each other. Generally an asparagus bundle comes in at roughly 1 lb/400gr, and will be less after removing the ends. Most of the time this is enough to feed two people, assuming you’re serving the asparagus as a side dish.

This amount of asparagus generally fits into 1 pan/skillet (a wide one), and takes about 20 minutes to cook, with the method I outlined above (covered for the first half, with a bit of water).

If you’re roasting or grilling asparagus the time will be different, and the heat might be higher. I recommend checking the veggies for doneness at 10 minutes if on the grill, and at 20 in the oven. The oven might take a bit longer than the pan.

Don’t fret too much if your first couple of asparagus batches come out too soft or too stringy. These veggies are delicious but temperamental, and they can trick a lot of people during cooking. The more variables you remove/control (such as the ends and the amount of moisture), the higher your chances of cooking great asparagus.