Have you ever had durian, outside of Southeast Asia ? If yes, then you know it’s pretty pricey. Especially so for a fruit that’s really smelly and doesn’t sit well with many people.

Still, folks can’t help but be both repelled and drawn by this incredible fruit. We’re thinking this has something to do with the high price tag, but we’ll discover soon enough.

This post will explore the reasons durian is so expensive, so read on if you want to know why you have to shell so much for the spiky fruit. 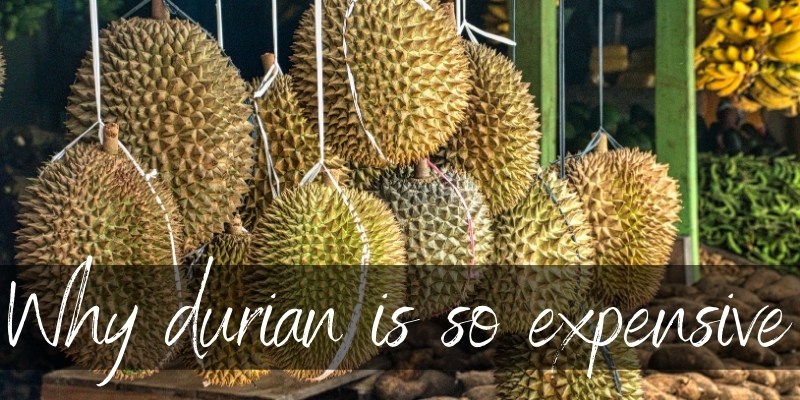 Table Of Content show
1 Why is durian so expensive ?
1.1 A reminder on durian
2 Durian demand is higher than its supply
3 Middlemen export durians, they charge extra
4 Durian is fragile, not easy to transport or store
5 Durian is important, simple as that

Why is durian so expensive ?

Durian is expensive due to several reasons, including being a luxury item. It’s highly sought after, and its demand is steadily rising.

In fact durian demand is so high the agricultural sector can barely keep up, and this drives the price even higher.

Durians are now sold by weight, and not by individual fruit, and a single durian is very heavy.

Another reason durian is expensive is due to transport challenges. Durian smells very strongly, has a very short shelf life, and thus needs special transport. This means extra fees and taxes, which again drive the price even higher.

All in all durian seems a paradox. As smelly and repulsive as it can be, it’s also very appealing in a strange sort of way. This adds to the fruit’s charm, and makes it an expensive food item.

All these reasons and more are explored in this article, since just one reason isn’t enough to fully explain everything. They’re all connected, and discovering how they’re connected was an eye opening experience. Read on to find out more.

A reminder on durian

A durian fruit is about a foot in width, slightly oval, and its body is covered with spikes. Its weight is two to seven pounds.

Due to its strong and stinky smell, it is banned in public transport in Singapore, Hong Kong, Japan, and Thailand. This is one of the reasons transport is really tricky when it comes to durian, because flying it is the fastest but also makes the plane unbearable.

Not many Americans have tasted a fresh durian fruit, aside from the Americans who have traveled to Southeast Asia. But many people all over the world have desired the fruit, either for flavor or for the hell of it.

After all, it’s spiky, smelly fruit that somehow tastes like caramel cheesecake ? It’s an experience on its own, so people are really wanting to try it at least once.

Durian demand is higher than its supply

From a business perspective, if the supply of a product cannot meet the demand, then such a product tends to attract a higher price. The demand for the durian fruit is high, and the farmers can’t meet those demands, at least in the recent years. 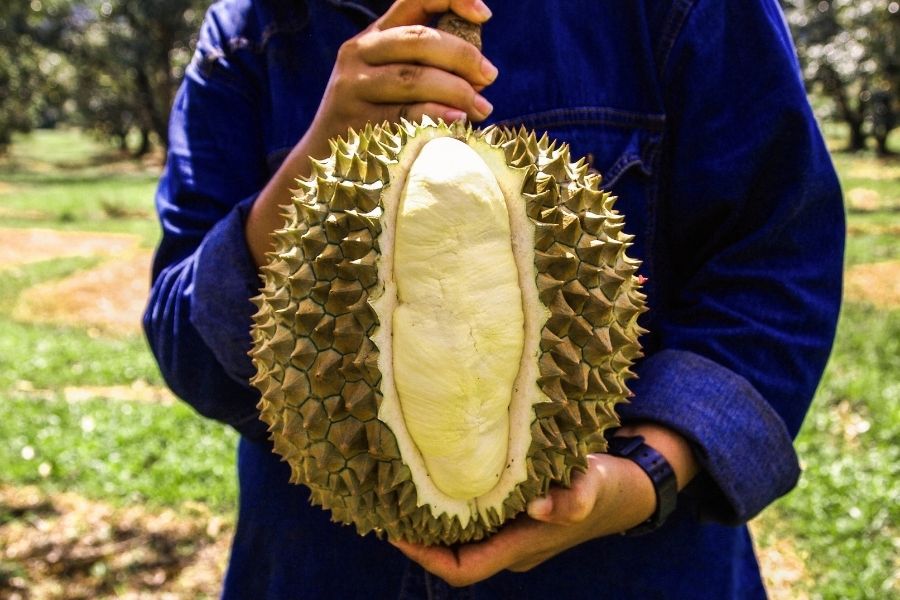 For example, China is known to have a high appetite for durian. With its high population, it has been a top destination for durian coming from Malaysia and Thailand.

The Ministry of Agriculture and Rural Affairs, People’s Republic of China, says that in the first half 2019, China imported 358,000 tonnes of durian worth $963 mil.

Now that predictions are showing that China’s demand for the durian is not going to slow down, real estate experts have stated that durian plantations will increase in value.

As a matter of fact, the high demand for the fruit has led to a high rate of deforestation in durian growing zones. Upcoming investors are seeking more land to grow durians, as speculation for its high demand grows.

Mainland China has a preference for exotic fruits, and with this observation, there is all the likelihood that the demand for the durian fruit will continue rising.

Aside from China having a ravenous appetite for durian, this fruit is also a celebration fruit. It’s cracked open and enjoyed at various festivals and holidays, more so than other fruits. This too raises its price, since it’s regarded as a very special fruit.

Read also: How To Tell If Durian Is Rotten, So You Don’t Waste Money

A common phenomenon in the global agricultural supply chain is the role that the middlemen play. These are the people that find new markets for products, and also buy them in bulk to sell them for profit.

These middlemen are both necessary and a bit of a nuisance, at least from a consumer point of view. On one hand, if they weren’t there there’d be no durian for us to buy.

On the other hand, the durian fruit would be cheaper, since there wouldn’t be anyone to inflate the prices.

But that is simply how export and import goes, so durian and actually everything that is imported will be overpriced.

When Malaysians grow durians, the middlemen are waiting to buy the produce at their own set prices, and sell it outside the country at a much higher price.

They’ve realized that the durian is now a luxury, and have made every effort to cash in on the new development. Many farmers have tried to break away from the middlemen, without success.

Again, if there were no middlemen there wouldn’t be any durian export, and this is a large chunk of a durian farmer’s daily income.

Durian is fragile, not easy to transport or store

The durian fruit has a short shelf life, and this contributes to the high prices. The shelf life of a durian is two to three days at room temperature.

Due to the strong sulfur smell of the fruit, there are many restrictions in its transport by air. The fact that the fruits require special transport means an increase in its prices. 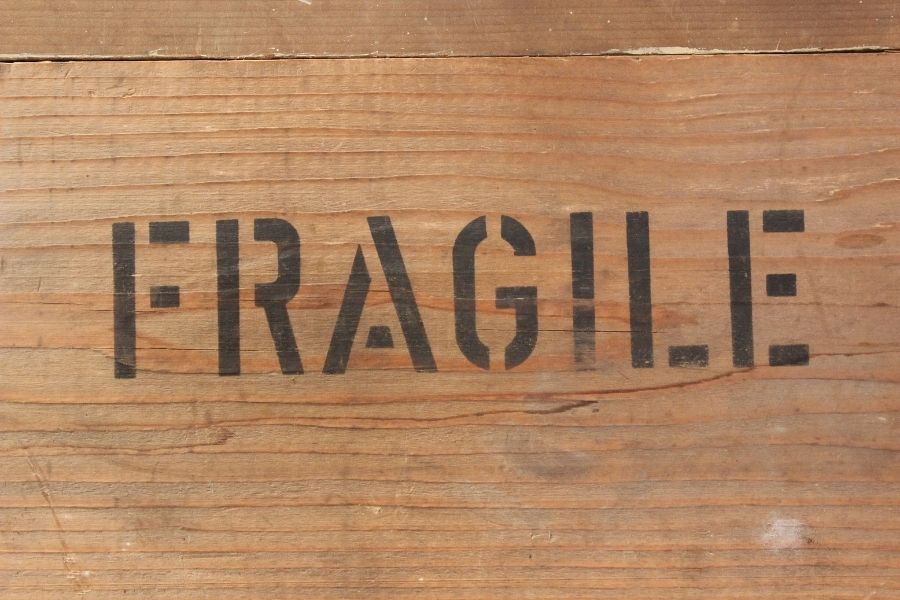 Plantation owners in Malaysia are required by the government to refrigerate the durians prior to export, including the Musang King durian. The objective is to retain the flavor of the fruit, but this adds to the cost of the durian.

The production of durians faces inconsistency and an interruption in production. Durian growing areas are vulnerable to flooding, excess rains, rain deficiency, and cyclones. There have been reported cases where an entire harvest has been lost due to natural factors.

All of this makes durian a very fragile fruit, from seed to harvest to storage and transport. Despite its many spikes and thick skin, durian really faces a lot of trials before finding its way into anyone’s home.

Durian is important, simple as that

Durian is not just a fruit; it has been used in national symbols and a national campaign. A case in point is Singapore where the fruit is the official fruit.

The Esplanade, located in the Downtown Core, Singapore, has an appearance of a durian cut into two and is known as “the big durians”.

Not only that but the durian is used in many celebrations and it thought of as ‘the king of fruits’, so its price will always be high.

Durian is one of the most expensive fruits in the world. If the current observations are anything to go by, the fruit is going to be more expensive.

As demand continues to grow, and as more and more folks travel to Southeast Asia and find this fruit, it becomes more mainstream. But before becoming so, it will first be very expensive, as a luxury item and strange fruit, like dragon fruit an star fruit. Which are also from Southeast Asia, it seems the West is fascinated by Asian fruits.