Have you ever noticed how every jam you ever buy is in a glass jar ? Some things come in plastic jars, like peanut butter or chocolate spread. But glass jars are a thing when it comes to jam. Why is that ? Is there any real reason behind it, or just a leftover from when jam-making first appeared ?

It turns out there’s a very food reason jam is stored in glass jars, and it has a lot to do with efficiency. Read on to find out. 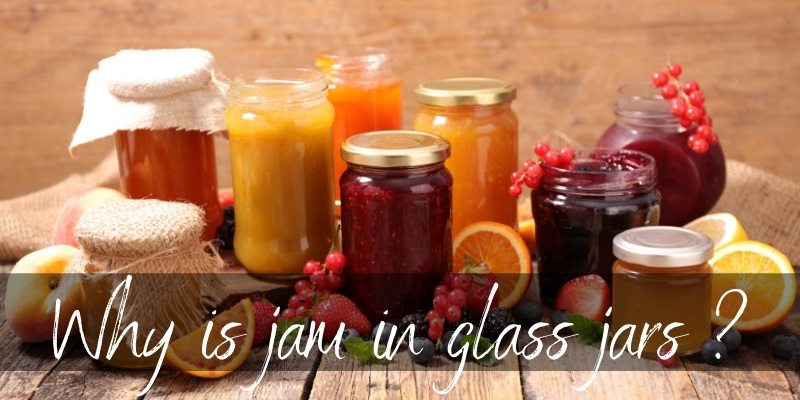 Table Of Content show
1 Why is jam in glass jars ?
1.1 Are glass jars better than plastic ?
1.2 Can you put jam in plastic jars ?
2 Do you seal jam jars when hot ?
3 Why do you turn jam jars upside down ?
4 Will my jam thicken as it cools ?

Why is jam in glass jars ?

Jam is stored in glass jars with a metal lid because they provide the best seal, and are very easy to clean and sterilize after each use. Glass is rigid, and the metal lids are a little flexible, which is the mechanism that allows a vacuum to form inside a jam jar. That’s the popping sound you hear when you first open one of those.

If the jars were made of another material, such as metal, they’d rust in time, and this would affect the jam quality. Glass is the perfect, neutral material that reacts with nothing and will not absorb any odors or flavors.

Are glass jars better than plastic ?

For preserving and sealing foods, yes, glass jars are the absolute best. This is because the glass is rigid, and it can keep the seal nice and tight. If it were flexible, like a plastic jar, it could loosen the seal in time or if squished during transport.

Another reason glass jars are better than plastic is because they can easily be reused. All you need to do is to wash them thoroughly, then boil them in hot water for a few minutes to make sure no bacteria or mold spore is left. They can easily break, yes, but we’re assuming you’re careful when handling glass and ceramic.

Can you put jam in plastic jars ?

Yes, you can store jam in plastic jars if you want, but they won’t hold as long. You absolutely need to store all the jam in the fridge, because the plastic won’t hold the seal as well as glass and metal.

If you use plastic jars, let the jam cool to room temp before you pour it in. Store in the fridge for up to 3 months.

Do you seal jam jars when hot ?

Yes, the jar seal forms when the jam and the jar are both hot. When you fill a jam jar, it needs to be hot because the hot jam could break the jar if it’s cold. Leave about half an inch of headspace. Put the lid on, and now you can boil the jars.

This creates pressure and vacuum inside the jar, removing the oxygen. The lids need to be very tight, and make sure the water covers the top of the jars. You will need a large, tall pot of boiling water, a rack that fits inside the pot to keep the jars from touching the bottom, and tongs to maneuver the jars.

Make sure the jars are closed very well ! Once the water in the pot starts boiling and the rack is inside, gently lower the jam jars into the boiling water. Leave some space between them, they should not touch. Make sure there is enough hot water over the top of the jars, at least an inch. Add more water (hot!) if needed.

When the last jar has been placed and the water starts boiling again, put a lid on and time the jars. Some recipes call for 5 minutes, some for 10, it depends on what recipe you have.

When they’re done boiling, turn off the heat, place a clean, dry towel on the table. Take out the hot jars with tongs and set them on the towel. If you set them directly on the difference in heat will crack them, be sure to use a towel !

Let the jars cool, then test for sealing. The middle of the jar should be a downwards, and if you tap it it should be solid and not move at all. Store in a cool, dark, dry place for up to 24 months.

Why do you turn jam jars upside down ?

You can seal jars without boiling them, and this is where turning them upside down comes in. This method is simpler but harder to perfect than the boiling method. 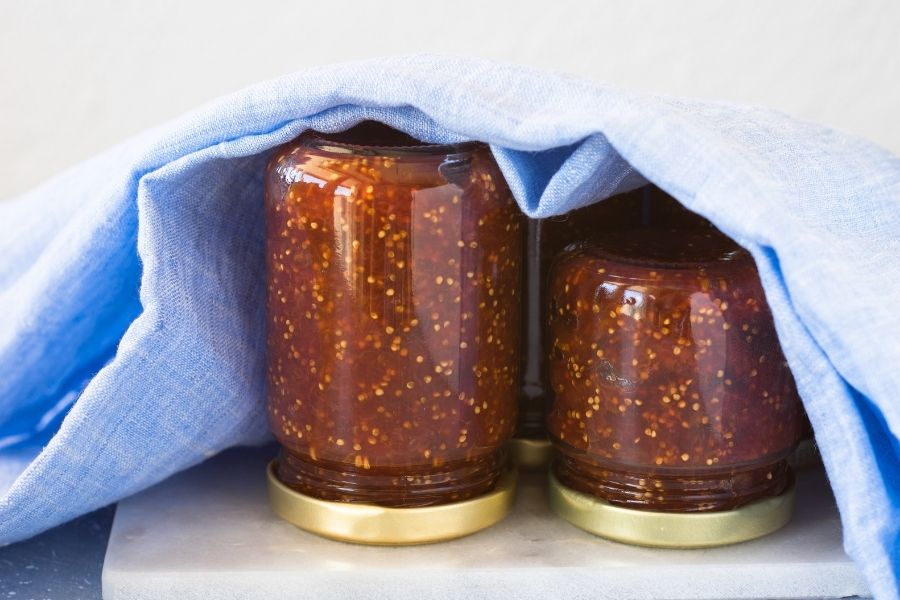 You need screaming hot jars and jam, and very quick hands. After you’ve poured the jam and put the lids on, you need to turn them on their heads. The hot jam will work the same as the boiling water, but you risk the seal not being tight enough if the surrounding air is too cold.

If the seal is successful, it can last as long as the boiled one. You check the seal the same way as before, tap the top of the jars after they’ve cooled down.

Will my jam thicken as it cools ?

Jam will thicken as it cools, and more pectin means thicker jam. If you’re making a berry jam, it can’t be as thick as marmalade or apple jam, because there isn’t as much pectin in berries. You can add powdered pectin, or you can cook the mixture for longer until there is less moisture.

However, you risk losing some of the flavor and color if you cook berries for too long.

And in case your jars haven’t sealed properly, you have a few options. If it’s been less than 24 hours since filling the jars, you can empty them into a fresh pot and continue simmering until they thicken a little more, then use clean, sterilized jars and lids and repeat the sealing process.

Or, you can leave them as-is but store them in the fridge and eat within a couple of weeks.