Stuffed bell peppers are a delicious family meal that just screams fall, chilly weather, and a warm home. So how do you make sure you get the best stuffed peppers out there ? You cook them perfectly ! But, as you know, getting the perfect stuffed bell isn’t as easy as it sounds. The biggest problem is getting a right balance between the stuffing and the peppers, in terms of texture.

So do you cook bell peppers before you stuff them ? If yes, how and for how long ? What’s the best rice to use to make sure it doesn’t come out undercooked ? What can you serve with stuffed bells ? All this and more, coming right up !

Do you cook bell peppers before stuffing them ?

Yes, you need to cook bell peppers before stuffing them in order to get the right texture and have them soften and cook just right, along with the stuffing. There are several ways to cook the bells before you stuff them, and we’ll explain what to do.

What you’re aiming for is a soft bell that can be easily pierced and opened with a fork. The stuffing should hold together somewhat, and the rice should be well done but not completely puffed out. This calls for a perfect moisture level.

As long as you prep the bells before cooking, you’ll be fine. Make sure you remove the top part, and all the seeds and white membrane from the inside. If you’re in a hurry, you can go for halved bell peppers. This way the cook faster, and may be kid-friendly in terms of portion size. Now let’s see how to cook them !

1. Microwave bell peppers on medium-low for a couple of minutes

Set your microwave to medium-low. If you go higher you risk overcooking them, and then they get very soggy in the oven. Place 2-3 bells on a plate, upright, with the lid that comes with the microwave on top. Don’t crowd them, otherwise they won’t cook right.

Let them cook for a minute first, then check on them. If they’re completely raw still, let them cook for another 2 minutes. You’re looking for a slightly wrinkly outer skin, but not too much. They should be soft to the touch, more pliable than a raw bell. But they should still have some body and stand upright on their own.

2. Steam bell peppers in the oven

Preheat your oven, and place the bells in a cooking tray to pre-cook while it heats up. How long this takes depends on how quickly your oven heats up. It should take between 5 and 10 minutes to get the texture you’re looking for. Gas oven will dry out the peppers faster than an electric oven, and it will cook slower.

Finally, you also have the option of parboiling them for a couple of minutes. Make sure you have an ice bath nearby to stop the cooking process.

Bring the water to a boil, make sure there is enough room for the peppers to move around the pot. Ease them in, and let them boil on medium-low for a couple of minutes. Remove one after a minute to see if it’s the right texture. If it is, check the others and remove as necessary.

How long does it take to soften bell peppers ?

Bell peppers will soften completely in about 30-40 minutes, starting as raw bells. This time depends on your oven (gas or electric), how thick the peppers are, and how much stuffing you’ve added.

Parboiling or pre-cooking will reduce this cooking time. it also helps if you use pre-cooked stuffing, especially if the stuffing is still hot or at least warm. This way you skip having to wait for all the ingredients to heat before they cook through.

How do you keep stuffed peppers from getting soggy ?

Soggy bell peppers are a common occurrence. You can avoid them by adding less water to the baking tray, and adding a tinfoil top to keep the existing moisture in.

You can also get stuffed peppers soggy if you simply let them cook too much. You see, bells have their own moisture and it will release into the stuffing, cooking it through, including the rice. Which brings us to the next point.

What rice do you use for stuffed peppers ?

Cooking your rice or grains, or whatever carbs you use for stuffed peppers will help a lot. You can easily get undercooked rice if you rely solely on the moisture in the bell peppers. And if you add some extra water in the peppers or in the tray to help cook the rice, you end up with soggy peppers. 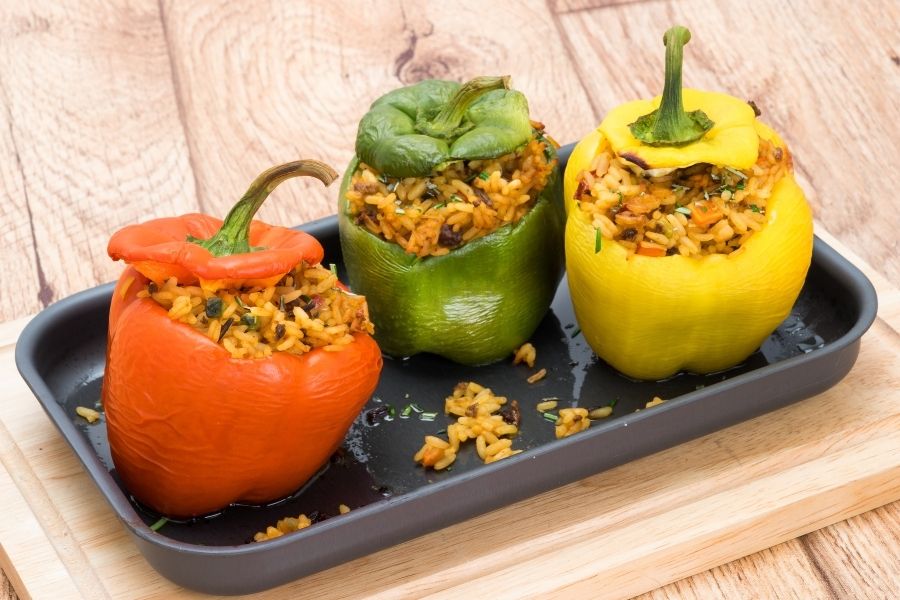 So your best bet is to use pre-cooked rice. That can be day-old rice, like for fried rice, or it can be store-bought pre-cooked rice, whichever works best for you.

If you use freshly cooked rice, you will end up with a mushy rice grain, and we advise against that. In fact, it may be best to pre-cook your stuffing. This way you can reduce the cooking time by half, depending on how much you cook it before hand.

What can I serve with stuffed peppers ?

Some of the best side0dished that go with stuffed betters are the simplest. Go for something hearty yet not overly-flavorful, because you get a lot of flavor and texture form the bells themselves.

So, some of the best sides for stuffed peppers are a creamy polenta, plain rice, or maybe a rice pilaf (in which case don’t add rice to the peppers). You can always go with the classic mashed potato, just be sure to leave it a little thicker, denser, to balance out the juicy bell peppers.

Stuffed peppers are delicious on their own, so you can even serve them with a simple, delicious Italian or French loaf.

In case you can’t find any bell peppers at all, you have a few options. Just keep in mind that these options will mean thinking the dish differently. Bell peppers are pretty much the only ones you can stand upright, the others are long and will rest on their sides. You risk the stuffing seeping out if you’re not careful.

We recommend Kapia peppers, no heat, deep red, fairly big but long. Other options are Poblano, Anaheim, and Cubanelle. Be sure to remove the seeds in these since they can have a mild heat. We recommend cutting the hole on the top but to the side a little. This way you’re sure the stuffing will stay in its place.

The blanching and steaming methods of pre-cooking these works very well, though they’re a little thinner than bell peppers so they will soften and cook through faster.

And that’s it, now you know how to make the best stuffed peppers out there ! As long as you pre-cook them, you’re fine. Just remember to only cook them a little, they still need some body before they go into the oven.