If you have a nightshade allergy then you definitely need to know all the veggies you can’t touch. But does this include black pepper ? It’s possibly the most common spice ever used, at least in Western cooking.

Trying to avoid something containing pepper is really difficult, so lets clear up whether black pepper is a nightshade or not. 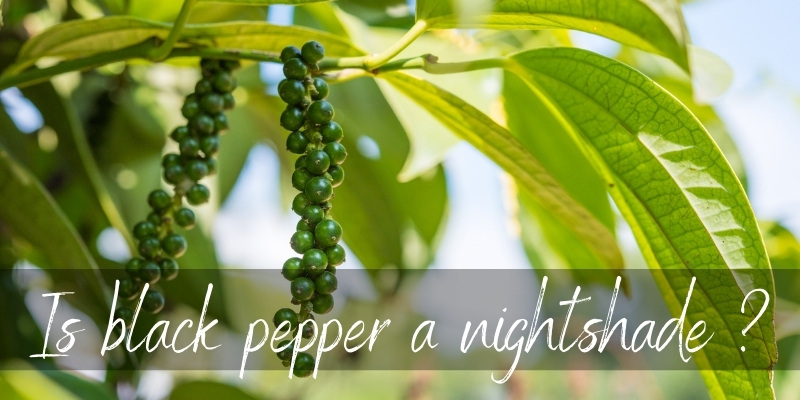 Is black pepper a nightshade ?

No, black pepper is not a nightshade. Despite the name ‘pepper’ it has nothing to do with chili peppers or bell peppers. And if you’re wondering about the Latin names, black pepper is named Piper nigrum, while the only nightshade you can confuse it with is called Solanum nigrum.

The only thing they have in common is black berries, which they both grow. But the Solanum nigris (nightshade) is poisonous, while the Piper nigris (pepper) berries are not poisonous. In fact, black pepper is only black once the berries dry out, and that’s how it was named black pepper.

There is such a thing as green pepper, which is the fresh, raw peppercorns and they’re not dried out. They have a much milder flavor and can be chewed along with the food.

We should clear up what nightshades are, so we’re all on the same page here.

Read Also: Why Is Black Pepper So Common ?

Nightshades are the common name given to all plants within the Solanaceae family. It’s a big family, and has a surprising number of veggies that we actually eat or use as decoration. Some of the most common nightshades are:

Not all nightshades are on that list, but the most common. The ones people know of, and as you’ve noticed some of them are edible. Of course, some folks may have a severe reaction to the alkaloids in nightshades and have to avoid them.

Some folks are fine with nightshades, some only develop a problem in time, and some just can’t have them at all from the get-go. The trouble with nightshades is that they contain alkaloids that affect the gut lining.

For those with IBS or any other intestinal or digestive problem, nightshades like tomatoes, bell peppers, eggplant, or even just smoking tobacco may trigger vomiting, diarrhea, gastritis, nausea, or worse.

Possibly one of the most common reactions is acid reflux after eating something with tomatoes or tomato sauce. This can be from an early age, or develop as time goes on. This is especially bad if paired with onions. Although onions are not nightshades, they are acidic in their own way and paired with tomatoes can be too much for some folks.

Possibly the biggest reason for confusion, pepper and pepper mean the same thing, at face value. But, peppers as in bell and chili peppers are one thing, and pepper as in ground peppercorn is another. 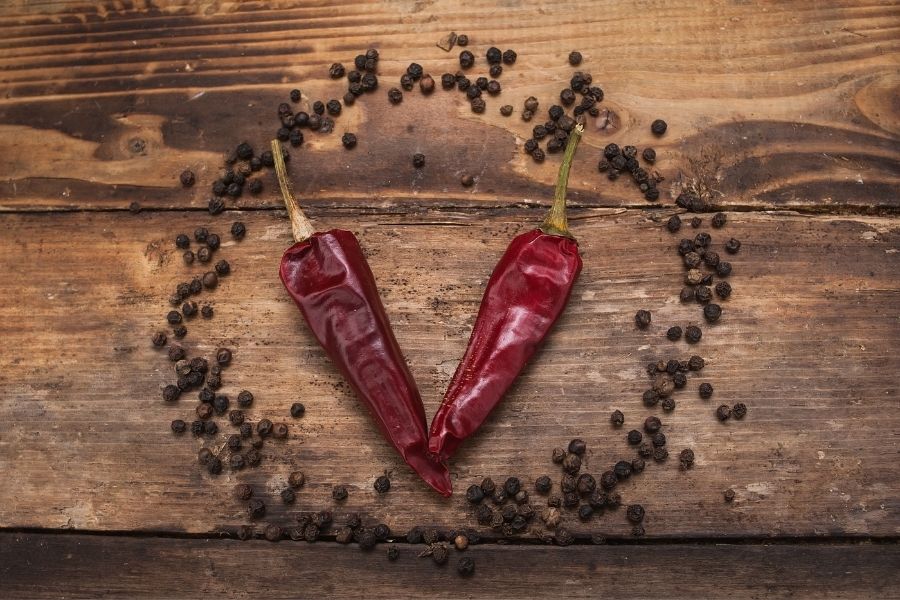 These two can be easily confused in a sentence, dish description, recipe, anything to do with food.

The reason peppers are called pepper is because when they were first introduced to Europe by dear old Columbus, black pepper was already an established spice. Moreover, the word ‘pepper’ referred to any spice that was hot, no matter what it actually was.

And the original peppers that Columbus brought home were actually hot peppers or chili peppers. So, being hot, the peppers got the name after the ground peppercorns.

As time went on, bell peppers were developed as a mild, heatless version. They are still called peppers, as they’re derived from chili peppers.

So in short, black pepper was the original heat, at least in Europe. Since nearly all colonization and culture was from Europe at the time (this was all the way back in the 15th century), the name for these veggies came from there as well.

And yes, peppers are nightshades ! The thing is, nightshade is a family, a big one. As botany goes, a family has several genera, and each of those have several species.

So, peppers belong to the Solanaceae family, the Capsicum genus, and the Capsicum annum species. From there on, each variety like jalapeno, bell, piri piri, birds eye, etc is a different cultivar.

Read Also: Why Is Peppermint Associated With Christmas ?

You may be wondering how or why pepper gets its heat without being a nightshade. Well, capsaicin (from peppers) is not the only natural heat-inducing irritant found in nature.

Pepper has its own, special irritant named piperine. It’s a bit different from capsaicin, in that it’s felt mostly on the tongue, and can get a bit bitter if you use too much. There’s also a distinct flavor to piperine, especially noticeable in freshly ground black pepper.

Capsaicin has more of a gradual burn, and with longer lasting effects. It also has no immediate flavor or taste, and its heat is more all-encompassing than piperine.

In short, pepper and peppers burn differently, but they’re both great ways to add heat to an otherwise bland dish. And although peppers are nightshades, actual pepper is not. This means that an allergy to nightshades wont’ carry over to black pepper.