Feta and paneer are two delicious options when it comes to toppings on your salad, sandwich, or just as a snack. But they’re so much more than that ! Each cheese is a traditional food in their respective countries, and a source of pride for the locals. They’re also vastly different in flavor but sometimes telling them apart is difficult.

So today we’re going to compare the two, tell you their main differences, and whether you can sub one for the other. Take a look ! 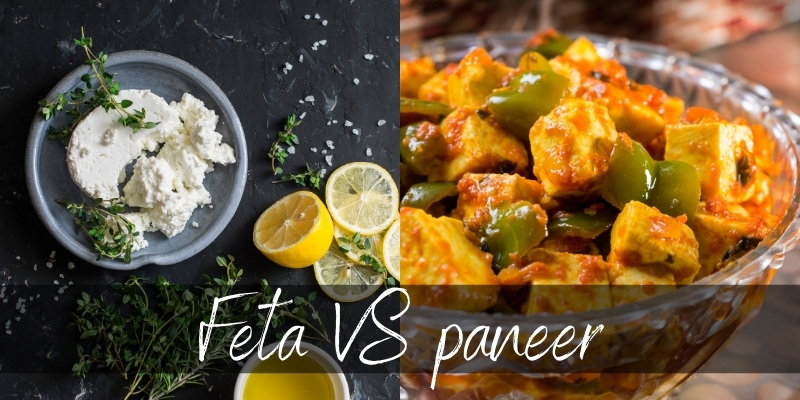 Feta is a sheep and goat milk cheese, while paneer is either buffalo or cow. There’s a sharp difference in flavor, with feta being salty, sharp, and a little musky while paneer is very mild and milky in flavor.

Paneer is also very easy to make and can be finished in a matter of hours. Feta is aged, brined, and takes months to get to the finished product. This also explains the difference in price when you go and buy any of these.

And not only is feta made from a wholly different milk than paneer, but it’s also not vegetarian. There are many more differences, but there are the main ones, or at least the ones that most folks will notice at first.

Both feta and paneer are delicious and you can easily use both in a recipe, depending on what you’re making. One thing to remember if you’re combining the two, don’t add extra salt to make up for the paneer. Now let’s take a look at the differences between these two cheeses, so we can fully understand what each of them is.

1. Feta cheese is brined and aged

First, let’s clear up one thing. Both feta and paneer are white cheese, so they are both different from the yellow, aged cheeses Americans are used to.

An important note is that feta is indeed aged, but its manufacturing process is different from yellow cheese. Once the cheese curds are formed, feta is compacted into blocks that are then set to age in bring for several weeks or months. 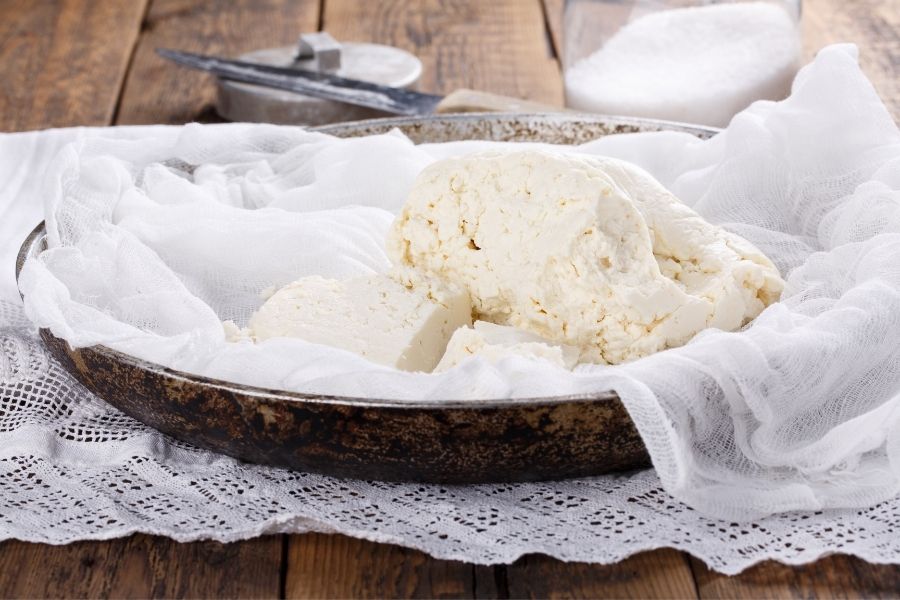 The cheese remains white, but fairly compact. The curds meld together, but they do not lose moisture and change color.

Paneer is somewhat similar, in that its cheese curds are also compacted. But it’s pressed in a cheese cloth for several hours, allowing all the whey to drip. It’s not completely dry, but it’s done in a few hours and you can eat it immediately after it’s set. As paneer is not an aged cheese, it’s easily perishable and not well suited for transport.

2. Paneer is quick, easy to make at home

If you’re looking for a DIY project, paneer is easier to start with. It’s beginner-friendly and much easier to make than feta. All you need is cow or buffalo milk – fresh ! – and time. You heat the milk, not necessarily boiling it. Add lemon juice or vinegar as it’s hot, and let it sit for a few minutes. Add some salt if you like.

The acid will interact with the proteins and separate them from the whey, forming cheese curds. Strain through a cheese cloth, squeeze well, leave to drip dry for a couple of hours. This will also set the cheese into a single block. If using pasteurized cheese the curds may be more difficult to form, but not impossible.

As for feta, it needs rennet, and barrels of brine, and a lot of time.

3. Feta is high in salt, paneer is very mild

Because feta is brined, it draws a lot of salt and this will give it its traditional salty tang, aside from the goat and sheep milk. Because of the high salt content, you may want to use it sparingly.

Paneer is very milky, and has barely any salt to begin with. This makes it a great option for those who need to keep their sodium intake low, and it’s also great to cook with.

In short you can use paneer wherever you would normally use fresh mozzarella.

4. Paneer is an Indian cheese, feta is Greek

If you’re putting together a meal with a specific theme, then it may be useful to know where each cheese type is originally from. Feta is a traditional Greek cheese, though you will find versions of it all along the Mediterranean coast. So any Greek, Italian, Spanish, Cypriot, even Turkish meal may have something very similar to feta.

If you go a bit up North and East in the former Soviet block(Bulgaria, Romania, Serbia) you’ll find feta style cheese as well, some even made of goat or sheep cheese.

As for paneer, it’s specific to the Indian subcontinent, but very similar cheeses may be found in the former Persian empire. Most of the time you’ll find paneer added to curries in place of meat, or wrapped in dough and fried or baked, or added to desserts and snacks. Because paneer is so mild and is not overly salty, it can easily draw the flavors it’s mixed with.

As an aside from what we were just talking about, feta cheese is usually used as it comes, fresh out of the brine and cold or room temp. It’s amazing on a cheese and meat platter, or in a sandwich, maybe even in a panini if you’re adventurous. Most of the time though, feta is not cooked.

Paneer on the other hand is rarely used fresh, ‘raw’. It’s usually cubed and cooked in stews, curries, bakes and fried dough, desserts, etc. So if you were wondering what kind of dish to serve either of these, we hope this part helped you out. 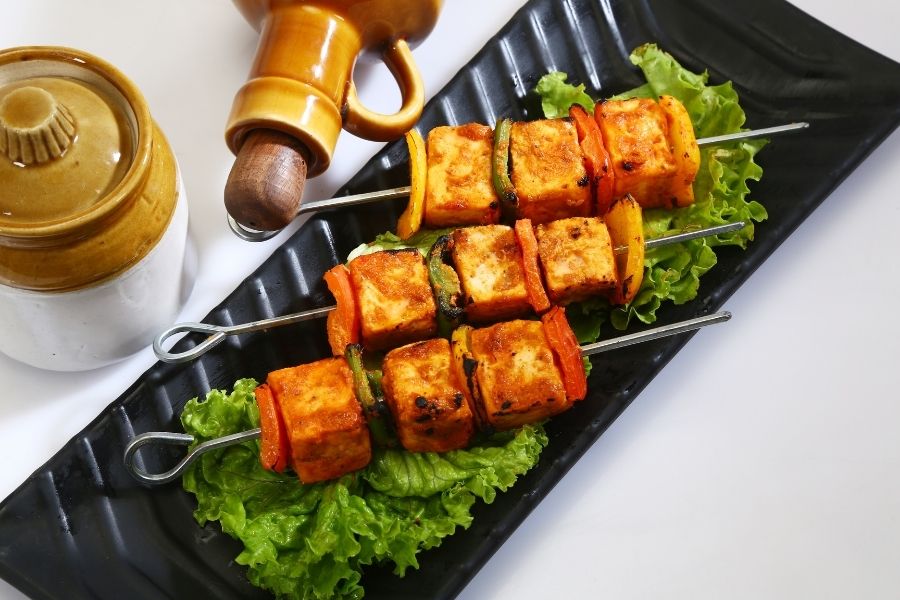 6. Paneer is vegetarian, feta is usually not

If you’re vegetarian then you may want to know that feta and paneer are made in very different ways. Well they both separate the cheese curds from the whey, but they do it differently.

Paneer relies on the power of heat to accelerate bacterial growth to generate lactic acid and then adds a little extra acid to get to really good separation.

Feta requires rennet to be used to separate the curds. This is an enzyme only found in calf stomach lining. Meaning that when a calf of sacrificed, all parts are used, including the rennet.

There is plant-based rennet, but it’s very difficult to obtain and it’s not the usual method of making feta.

7. Feta is sheep and goat milk, paneer is always cow or buffalo

Back to the flavor department, feta has a much stronger, sharper flavor than paneer. It’s made out of sheep’s milk, with a maximum of 30% goat milk. This still imparts a very strong flavor, and it’s a very dividing cheese. You either love it or hate it.

Paneer is cow or buffalo milk, which makes it appealing to a wider range of palates. So if you know you’ve got picky eaters, then maybe feta isn’t the best choice.

Or if you don’t know whether to add feta or paneer as a topping, know that feta can and will flavor whatever you add it to.

Since we’re talking of toppings, if you’re making something where meltability is important, then g for paneer. It gets softer, but will not melt completely like mozzarella.

In fact it’s the rennet cheeses that tend to melt a little, so you’d think feta would melt. But because if it’s brining and high moisture content it simply cannot.

So, if you want a little melting cheese, try paneer.

Can I substitute feta for paneer ?

If you’re looking to use feta instead of paneer, we recommend embracing the sheep and goat milk flavor, and not adding any salt. This cheese is strong, and has plenty of salt so don’t overdo it.

You can also substitute the other way around in which case you need to add ingredients that are salty and tangy, as feta would be. So something like olives, capers, anchovies, or just extra salt will do.

Can I use feta instead of cottage cheese ?

Feta can be used in place of cottage cheese if you’re looking to replace texture. Cottage cheese is simply white cheese curds mixed with cream, and salt. Feta will be saltier, but it will bring curds ( you can crumble it) and you can add some cream if you want.

If you’re making a savory pie, then you can omit the cream and use the crumbled feta with some spinach as a filling. Or you can even add the feta crumbs to a salad !

A good in-between is halloumi

A better option that’s in-between feta and paneer is halloumi. It’s made very much like feta, made with sheep or goat milk, and often mixed with cow milk. This gives it a milder flavor, and t’s an excellent grilling option.

Halloumi is very salty though, so keep this in mind when substituting for paneer. It’s closer to feta than paneer.

Or try mozzarella instead of paneer

A better substitute for paneer would be mozzarella, also made of cow’s milk and very, very mild. Only this one melts like there’s no tomorrow. If you want a little more flavor, don’t go for fresh mozzarella packed in whey, look for a lightly aged one.