Whether you’re one of the 65% of the lactose intolerant people in the world, trying to wean yourself off of animal products, or simply bored of cow’s milk, finding a substitute for milk in mac and cheese can seem pretty daunting.

After all, cheese is right there in the title, and everyone knows cheese is made with milk.

So, that’s why we’ve compiled a list of milk substitutes (dairy and non-dairy) to make your mac and cheese just as creamy and dreamy as ever! 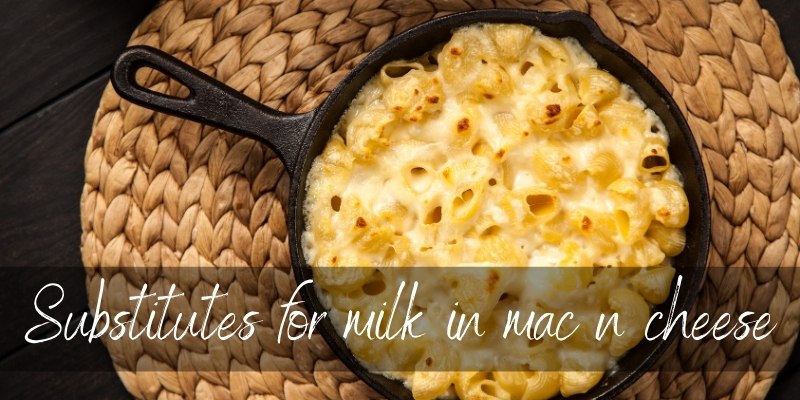 Without the cheese, mac and cheese is just boring old macaroni. So, if you’re fine with dairy but want to try a new spin on an old classic, try one of these milk substitutes.

And if you’re out of butter, try these 5 substitutes for butter in mac n cheese.

Now, this one might seem a bit odd at first. After all, yogurt is usually consumed for breakfast, filled with fruit, honey, and other sweeteners. But if you use plain yogurt, you’ll get that creamy, tangy taste without any of the sweetness!

If you’re looking for mac and cheese with an even creamier, tangier bite than regular yogurt, try plain Greek yogurt. Greek yogurt is so much thicker because of its straining processes.

The whey (the liquid part of milk) is kept in for regular yogurt, making it a bit more viscous. But in Greek yogurt, the whey is removed! 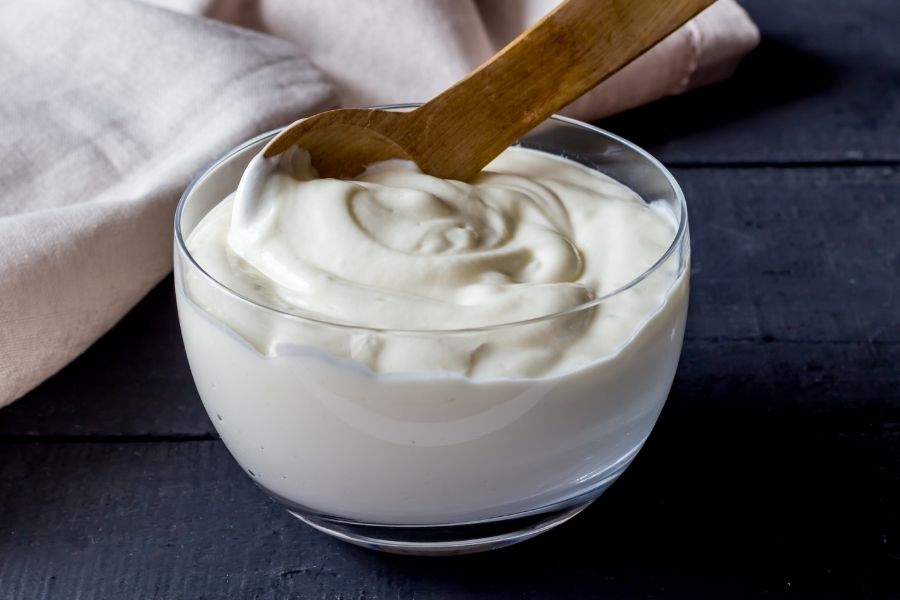 Try to get a slightly higher fat yogurt, otherwise the texture and final flavor won’t be as good with skinny yogurt.

If you can’t enjoy a taco or a bowl of nachos without a hefty helping of sour cream, this rich, sour condiment might be the substitute for your mac and cheese.

Sour cream is fermented milk, and shouldn’t be actively heated or boiled. Only add it to the mac n cheese at the end of the cooking process, so it will tie everything together.

So, if you’re planning on replacing your mac and cheese’s milk with sour cream, keep in mind that it will be much heartier and tangier! To make things even more interesting, you might even sprinkle a bit of curry powder into your mac n cheese.

The tangy, rich notes of sour cream will go well with the spices, and the cheese will go great with it too.

You may want to try out heavy cream to make another thick version of mac and cheese without the extra tang. Ever leave out a glass of milk by accident only to find a thick layer of white creaminess on top? That was heavy cream!

Heavy cream is that fatty part of milk, and that’s why it’s an awesome substitute for milk in an ever so rich and creamy mac and cheese. Just be careful since it’s sure to fill you up really quickly.

For some this may be too heavy of a flavor, so maybe don’t add too much, or thin it out with water.

Cream cheese is actually made by curdling milk. Sounds kinda gross, right? But, it’s the process of curdling, straining, and smoothing that makes cream cheese that light, fluffy, creamy goodness we all love to slather on our bagels. 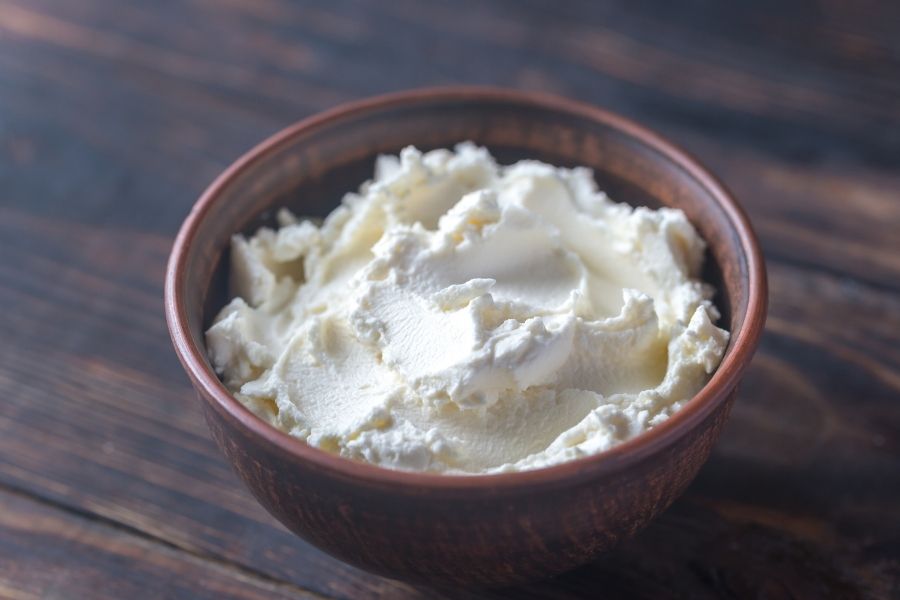 And, similar to milk, cream cheese will provide a mildly sweet flavor to your mac and cheese, nothing too overpowering, of course. Its extra thickness but similar flavor is what makes cream cheese the perfect milk substitute for anyone who doesn’t want to venture off too far from the classic.

As with the other substitutes so far, if you find it too thick simply add a little water and keep mixing.

If you’re a very adventurous cook, you might find goat’s milk or goat cheese to be excellent cow’s milk substitutes.

Goat’s milk is about the same consistency of cow’s milk but will provide a much stronger, zestier flavor. Goat cheese will provide the same flavor, just a bit more thickness.

Both goat’s milk and goat cheese are also wonderful milk substitutes because they’re both more nutritious. Goat’s milk contains less sugar and more Vitamin A, Vitamin B6, potassium, and calcium than cow’s milk.

Perhaps, you’re looking to improve your health by cutting out fatty animal products, but still want to enjoy your beloved mac and cheese. With any of these non-dairy milk substitutes, you will be able to do just that, saving your tummy from pain and extra pounds!

If you aren’t averse to nuts, cashew milk can give your mac and cheese the creamy, luscious texture you’d expect in such a dish, plus a bit of an extra warm, nutty flavor.

Store-bought cashew milk is an excellent option for those watching their carbs and calories, as well. In one cup of cashew milk, you’ll only spend 25 calories, 1 gram of carbohydrates, and 2 grams of fat.

Just remember, you’re going to want to pick up a container of unsweetened cashew milk for this recipe. The last thing you’d want is sugary mac and cheese.

Almond milk, as long as it’s unsweetened, will provide your mac and cheese with a much nuttier flavor than cashew milk. It also tends to be a bit sweeter in its flavor profile, so keep that in mind if you’re looking for that pop of sweet with your savory. 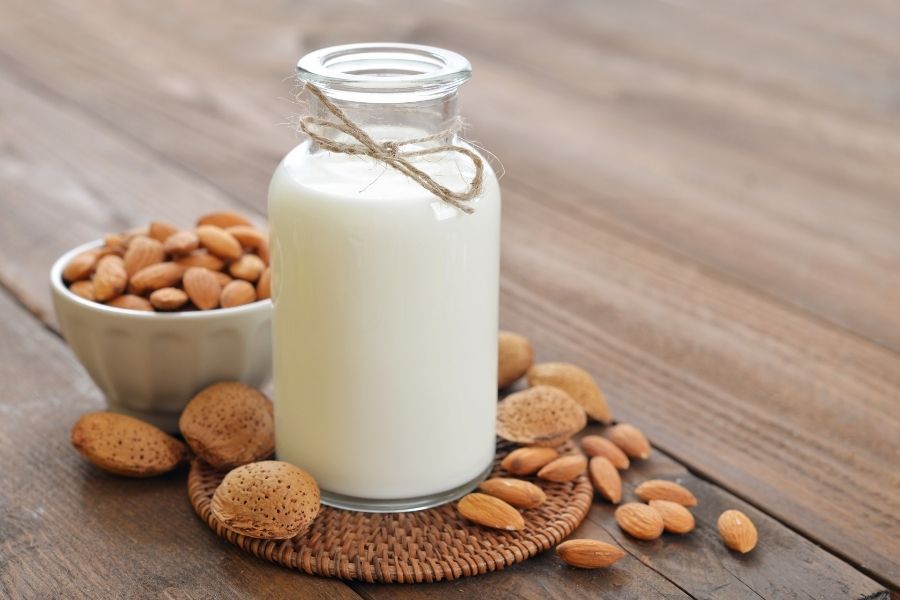 Compared with cashew milk, a cup of unsweetened almond milk will cost you 37 calories, 1.4 grams of carbohydrates, and 3 grams of fat. Still, not so bad if you’re trying to cut back on those calories and carbs.

The only downside of almond milk as a substitute is its watery consistency. If your mac and cheese must be thick and creamy, you may want to either look at another option or add some nutritional yeast.

For those who are allergic to nuts or simply don’t like them, oat milk is another great substitute that’s very similar to regular milk. It’s quite sweet on its own, so make sure you check the label for the unsweetened version before making your purchase.

You’ll find that oat milk’s consistency is actually pretty similar to that of your average 2% milk. So, oat milk can offer your mac and cheese an almost identical level of creaminess.

However, keep in mind that oat milk – even the unsweetened version – is a bit heavier than the above nut milks’ calories and carbs. For a cup of the leading fortified brand, you’ll be adding 130 calories, 16 carbs, and 5 grams of fat to your macaroni meal.

If you’re really looking to change up your mac and cheese’s flavor, try coconut milk. It’s dairy and nut-free, and a perfect option for a unique flavor.

As with all of these milk substitutes, you’re going to want to vie for the unsweetened version. Coconut milk will offer your mac and cheese an even creamier, thicker texture with that punch of coconutty goodness. Just make sure you actually like the flavor of coconut before wasting your ingredients on this one.

A cup of unsweetened coconut milk will barely cost anything from a caloric standpoint. In addition to vitamins and minerals, coconut milk will only run you 45 calories, less than 1 gram of carbs, and 4 grams of fat.

There’s a vegetable-based heavy cream that’s been available for several years. You may find it as cooking cream, vegetable heavy cream, and it’s even used in whipped cream sometimes.

Be sure to read the label very carefully, it should contain 100% vegetable fat and nothing of animal nature.

Now, this one might not be for everyone. After all, it is basically carbs on carbs. However, if you’re looking for a hearty, nutritious, dairy and nut-free substitute for cow’s milk in cheese form, this potato-based cheese may be right for your mac and cheese.

For this option, you’re going to need a carrot and some paprika or turmeric for color, nutritional yeast for gooeyness, and of course, potatoes. All you need to do it boil, strain, and blend the veggies. Then, mix them up with the yeast and spices until it tastes perfect for your palate.

With the vegan, gluten-free option, your mac and cheese will be extra creamy and oh-so filling! You may never return to regular old milk again.