Whenever you read a fancy recipe, new words and cooking methods come up and each has a fancy new name that doesn’t sound like something you’d usually hear in a kitchen setting. But they’re there and they’re staring at you and sometimes you need help deciphering some of them.

Worse, sometimes it’s not even clear how some of them are different from others. So you’re left wondering, and this is where we come in. Some of the biggest offenders when it comes to confusing names are compote, confit, and how they’re any different from a sauce. Let us explain. 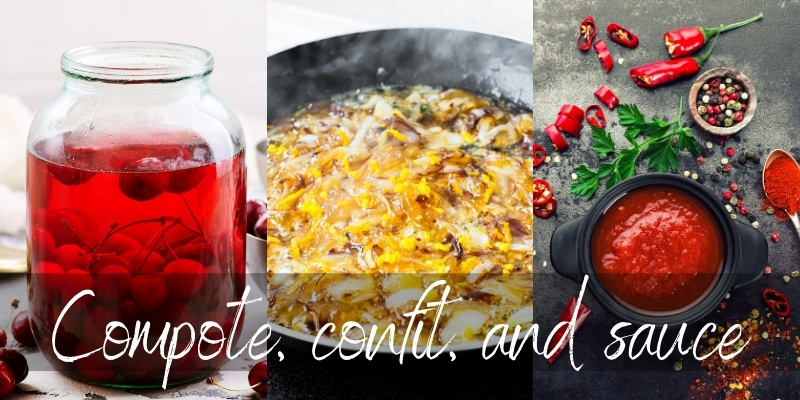 Table Of Content show
1 Compote vs confit vs sauce
1.1 1. Compote is briefly cooked, sauce and confit take longer
1.2 2. Confit and sauce may have veggies, compote is only fruit
1.3 3. Sauces may be thickened, compote and confit are not
2 All three are a great method for long term storage
3 Is compote a sauce ?
4 Is ketchup a compote ?
5 What about duck confit ?

Compote vs confit vs sauce

Compote is fruit that’s lightly cooked and packed in sugar syrup, preserved for up to two years. Confit is a cooking method that involves slowly cooking the food at a low temperature, in fat (added or original). Sauces are a much looser definition, ranging from thickened sauces like gravy to jam-like preserves like cranberry sauce.

Which you use has an impact on the final product of your recipe, and each produces a different food item. They’re all at least moist, if not straight-up wet like the compote. So let’s explain these differences in detail. The more you know about each, the easier it will be to master each of them.

Compote is French for ‘mixture’, as it’s a mix of water, fruits, sugar, and spices, lightly cooked and then served as a dessert. Actually, canned fruits are exactly compote ! Yep. 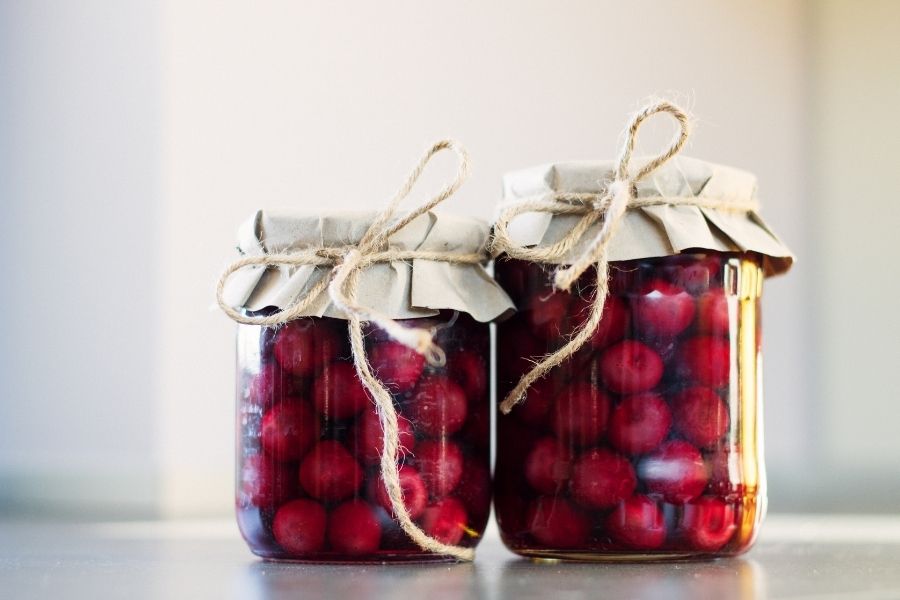 Read also: Why Is Jam In Glass Jars ?

By comparison sauces take longer to cook, because they need to account for various things like flavor extraction, emulsion, thickening, simmering to get the flavors to melt together (like tomato sauce) and so on. You can make a quick sauce, but most take a while to cook nicely.

Confit also takes longer to cook. It’s a low and slow method of cooking, mostly meant to be used for preserves. Meat or veggies cooked in grease, oil, or sugar syrup at a low temperature (around 90 C/ 200 F) and stored in airtight containers keep for months if stored in a cool, dark, dry place. Actually jams and marmalade and jellies and the likes are a result of the confit method.

2. Confit and sauce may have veggies, compote is only fruit

Another important distinction is the ingredient list when cooking any of these. Sauces are a wild mix of anything you like, with examples like chutney, ketchup, soy sauce, cranberry sauce, chocolate topping, gravy, anything. you can get fruit, spices, veggies, meat juices, anything. 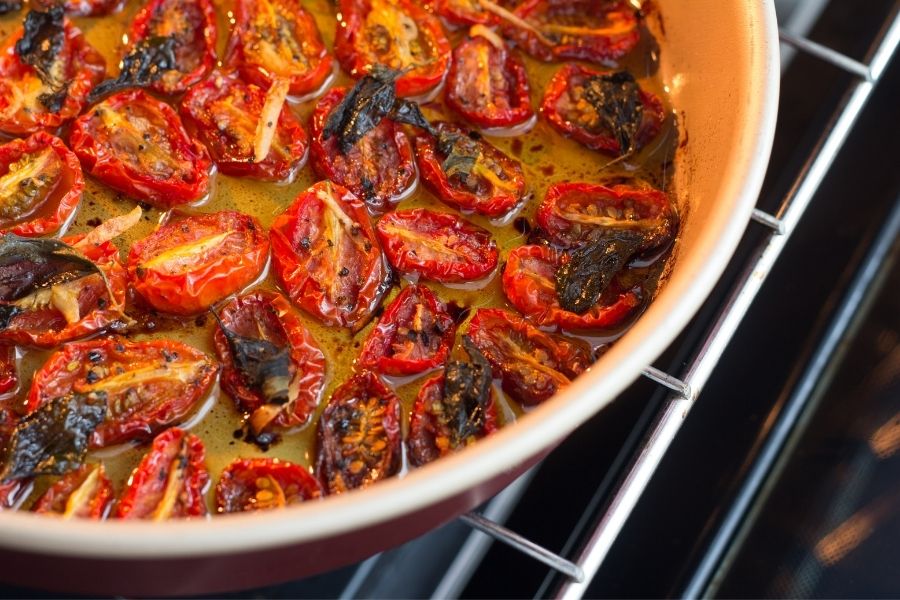 Confit uses meat, vegetables, or fruits but never mixes them. They’re meant to be preserved and are treated as separate food categories.

Compotes only use fruit as their base ingredient, aside form water and sugar.

3. Sauces may be thickened, compote and confit are not

When it comes to texture, sauces are the only ones that are thickened with something that is added for that specific purpose. Fruit confit like jam and marmalade may be thickened too, but that’s a side-effect of the pectin found in fruit. The pectin is there to set the fruit, not to thicken it.

Compotes are not thickened, they’re actually the loosest of the bunch. The only thickness is from the little pectin that the fruit have, and the sugar syrup. It’s nowhere near as thick as a confit.

Sauces on the other hand are sometimes thickened to get to a more viscous consistency, often with flour or cornstarch or something similar. 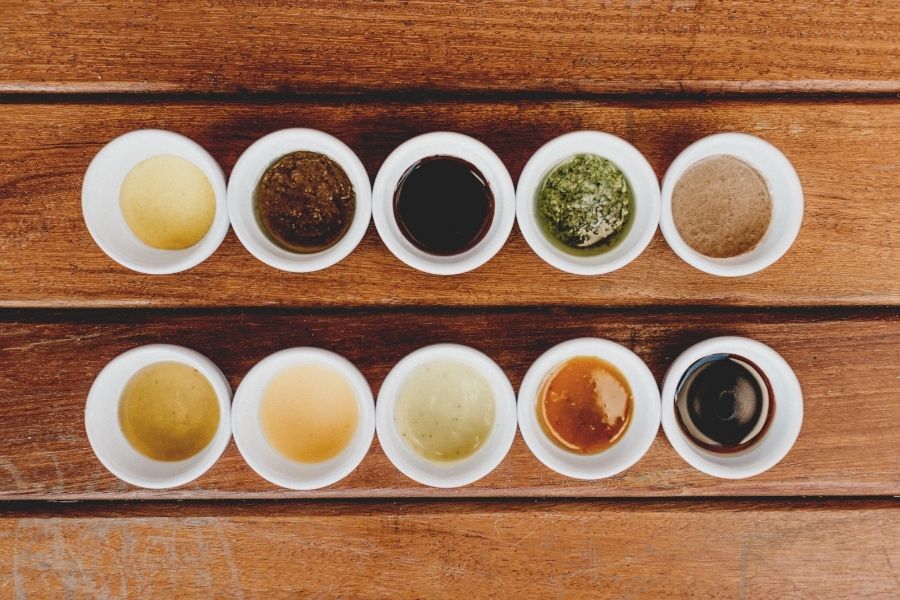 All three are a great method for long term storage

All three are great for long term storage if kept in a cool, dark, dry place. The key there is to seal the jars to make sure no oxidation occurs. Well, there is a little oxygen but it’s not enough to spoil the food in a few months.

When it comes to commercial confit, compote, or sauce, they can last even years because they often have preservatives added.

Is compote a sauce ?

No, compote is not a sauce as it has large chunks of fruit and sugar syrup. By comparison sauces made with fruit always have it chopped or mashed or pureed. The whole point of a sauce is that it must be runny and spread. The chunkiest a sauce can be is a cranberry sauce with fresh cranberry.

So no, compote is not a sauce. As for the sugar syrup in it, it’s too thin and has few ingredients to be really considered a sauce.

Is ketchup a compote ?

No, ketchup is not a compote even if it can last several years if unopened. The main distinction is that compote has large chunks of fruit, suspended in sugar syrup. Ketchup has pureed tomatoes that have been cooked for a long time, and the entire mixture is thickened. There are many flavors and spices and herbs added, to the point where it’s only a sauce, not a compote.

You could make a tomato compote if you wish, but it would be a savory dish rather than a sweet one. And then it’d stop being a compote, as it needs to have a sugar syrup.

What about duck confit ?

Duck confit is both a specialty and a great way to preserve duck meat. It’s a specialty from the southwestern region of France, and it uses the whole duck. An entire, raw duck is coated in salt and set in the fridge for 36 hours, after which it is slow cooked in a deep baking dish for 4 to 10 hours.

Duck confit relies on the duck’s own fat, rendered slowly by the low temperature and long cook time. After cooking, the duck meat can be used on its own, or in other dishes, or set in jars for preserving. The fat is usually added to those jars.

It may sound like nothing close to a fruit confit like jam, but the principle is the same: slow, long cooking at a low temperature and then preserving the final product.

And that’s pretty much it about compote, confit, and sauces. Hopefully the difference between them is clear, and you which to use for this and that recipe. All three are great in their own way, and it’s best to keep them in mind if you’re ever looking for long term storage ideas.