If you really like Indian food but have a hard time deciding what to order from an Indian restaurant, you are not alone.

I know the feeling since there are a lot of different sauce types that have various ingredients, but the name doesn’t tell you a lot about what they are made of.

This is clearly the case for Korma vs. Tikka masala.

Even more confusing, sometimes the ingredients are almost the same but different in how they are cooked or how much of each ingredient is used so that the taste will be quite different.

So to clear things up, I decided to make this article that will show the differences between tikka masala and Korma.

There are a lot of other delicious Indian dishes, and we will get to them in the near future. 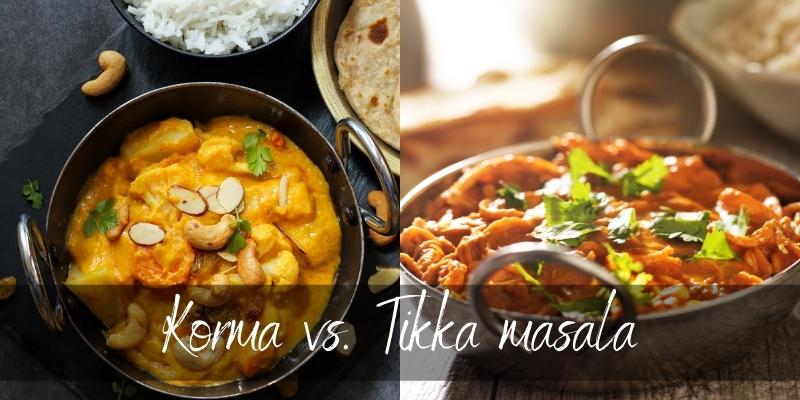 The main difference between Korma and Tikka masala is that Tikka masala is a more complex and creamy sauce that is made with Indian spices, onions, cream, and, most importantly, tomatoes. Meanwhile, Korma can be made with only yogurt, coconut milk, spices, water, or stock, and sometimes nuts are added as well. The result is that Korma is often a sweeter, milder sauce than Tikka Masala.

Read Also: Can You Reheat Curry ?

Korma sauce is usually creamy, a bit sweet, and has a thick texture.

Korma actually means “braised” because this is the way you should make an authentic Korma sauce. This also gives the chances to all ingredients to “get to know each other” for a long time and will give Korma a very coherent taste even so it can have quite a lot of different tasting ingredients like yogurt, cardamom, coconut, and so on.

Traditionally, the meat was boiled with the sauce simultaneously, but lately, more and more people are adding the meat later on. This doesn’t change the taste all that much, but is not 100% authentic.

To get the best taste out of your korma chicken, it is recommended to sear the chicken before adding it to the sauce.

Tikka masala is a tomato-based sauce with many spices like ginger, turmeric, and coriander which gives Tikka masala a spicy and mildly sweet taste. It is not the same sweet taste as Korma since the sweetness comes from tomatoes this time, so a bit of acidity.

Tikka masala has a nice thick consistency and a creamy taste that goes very well with many types of meat and vegetables and a bowl of simple white rice as a side dish. 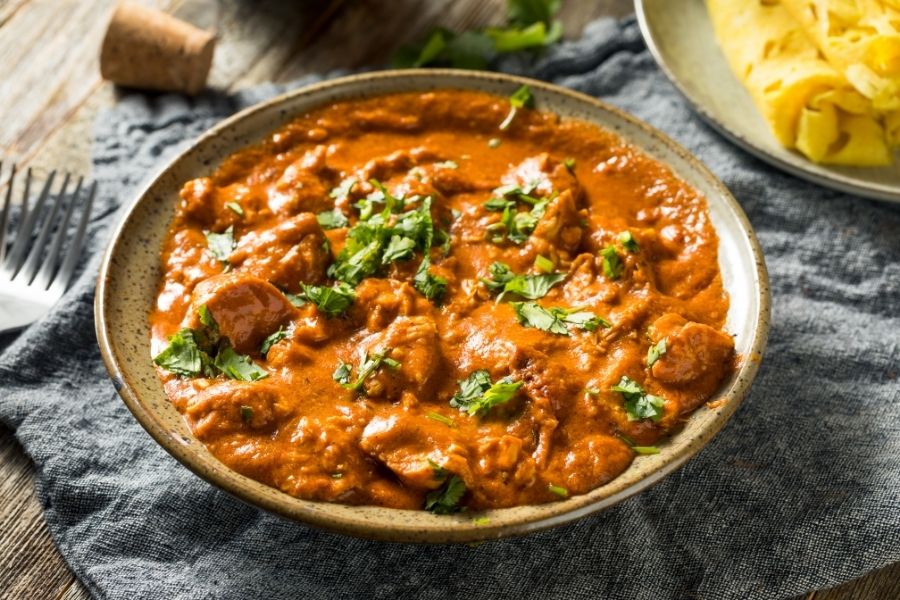 Differences and similarities between Korma and Tikka masala

If you don’t know the Indian Cuisine very well, you may easily confuse those two when you first see them because there are many similarities and only a few differences.

-Let’s start with the differences:

Korma has a mildly nutty, sweet, and earthier taste and the main ingredients you will notice are nuts, coconut, and coriander in most cases.

While tikka masala is a creamier sauce that tastes spicier due to the main ingredients being tomato cream, yogurt, and garam masala which is a blend of ground spices. So tikka masala will taste more like what you’d expect from a typical curry.

This can be a difference, it is not always the case, but usually, masala is made with small pieces of boneless chicken while Korma can be made with chicken legs that were seared before for a better taste. That being said you can use any sort of protein source you like.

Usually, chicken Tikka masala is served with plain white rice or a simple cheese naan not to cover the tikka masala’s taste. While, Korma can work with something that has a stronger, sweeter taste, like coconut rice.

Tikka masala has an orange-ish color due to the tomatoes being a more important ingredient, while Korma usually has a more yellow-ish color.

-Now let’s go to the similarities:

This can differ, but usually, it is the same. You first have to cook the chicken and then add it to the creamy sauce. In the past, the chicken was added to Korma in the beginng and boiled together with the other ingredients, but now it is usually done the same way as Tikka masala.

You will need about 45-60 minutes for both dishes. Of course, this can be impacted by a few factors, like how thick or thin you prefer the sauce, but usually, this is a good estimation of how much time you need to cook both of them.

They both have a creamy texture, especially if you blend the nuts very well before adding them to the Korma sauce; it is hard to notice any difference in the texture.

They are both Indian Cuisine staples that are known worldwide, and the smell and taste it is quickly associated with India.

Read Also: Why Is Rice White ?

Tikka masala and Korma have a lot of similarities. Still, the taste is quite different due to some different ingredients, so make sure you don’t order Tikka masala when you actually crave Korma or vice-versa.

They are both creamy and very good, but one is spicer than the other, which can change your experience with Indian food.

Indian cuisine is a big one, and we have to cover a lot more than those two, but I think this is a good start. I really hope everything is clear now regarding the difference between Tikka masala and Korma.