Walnuts, their amazing crunch and delicate flavor goes great with pretty much everything. Roasts, stuffings, sundaes, cookies, cakes, anything.

For a nut we adore so much, we don’t know all that much about it. Today we’re taking a look at walnuts – where they grow, where they’re from, and a few common, related questions.

So let’s start with the most important one, especially if you’re out in the woods and see a tree that may be familiar. 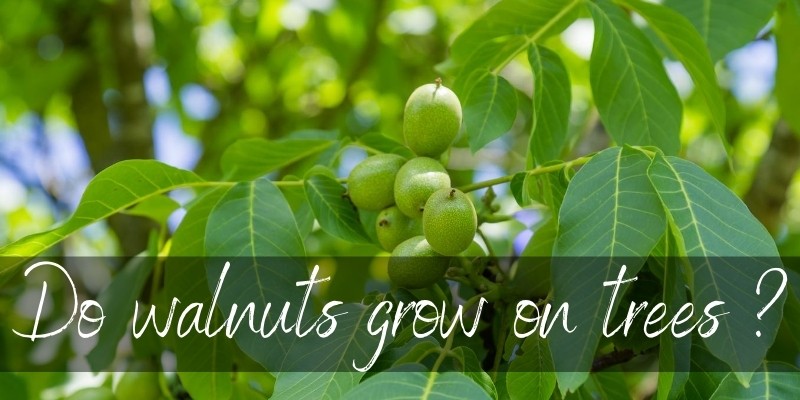 Table Of Content show
1 Do walnuts grow on trees ?
2 Where do walnuts come from ?
3 Can you eat walnuts straight from the tree ?
4 Why are walnuts so expensive ?
5 What can you do with walnuts ?
6 How long do walnuts last ?

Do walnuts grow on trees ?

Yes, walnuts do grow on trees ! The trees are called Juglans regia, and are incredibly common nowadays, being grown commercially. Along with pecans, walnuts are commonly found in snacks or used as a garnish.

These trees are very tall, reaching up to 35 m/120 ft in height, with a very large, wide branches that take up just as much space.

You can find them in the wild as well, but you can’t just eat the nuts as-is. The green skin on the outside isn’t edible, in fact it’s incredibly bitter and needs to be discarded. We’ll touch more on that later.

But for now, if you’re just curious, or plan to grow your own walnuts you should know that they grow on trees. If you try to plant one you will need a lot of space in your back garden, and they will provide lots of thick shade.

Where do walnuts come from ?

Walnuts are a very ancient nut, and are originally from a wide area covering Southwest China, the Himalayas and reaching into the Balkans.

No one knows exactly where or when the first specimen appeared, but that is the wide area its traces were found all the way back into antiquity.

The wide growth area of these trees means some folks will know them by one name, and some by another.

The most common names are Persian walnut and English walnut. They’re the same thing, but known in different areas.

It’s English walnut in areas that bought the first nuts from the English, hence the name. And it’s a Persian walnut for those in the Balkan and Carpathian mountains, though it’s been there for so long it’s considered a native nut.

This nut is so ancient Alexander the Great was the one to introduce it to Greece and Macedonia. This was an early form that originated from the Middle East, and is the ancestor of nearly every walnut.

One of the largest walnut forests is in Kyrgyzstan, in Arslanbob. Despite that they’re not the world’s largest exporter.

You can find walnuts in all their forms, and this contributes to their high price tag. 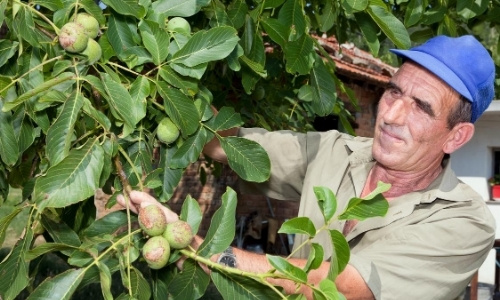 Can you eat walnuts straight from the tree ?

No, walnuts cannot be eaten straight from the tree.

Actually walnuts need to be timed and handled properly. It’s not difficult, but requires some patience.

You see, a walnut is encased in its green skin or husk, which isn’t edible at all. The husk will peel off on its own when the walnut is ripe.

Walnuts that are ripe will fall from the tree if you shake the tree a little, or if the wind blows a little harder.

Even so, the hard outer shell needs to be dried out completely in a very well ventilated room, with very little moisture.

Keeping fresh walnuts dirty and moist will promote fungal growth and this will ruin them.

So wait for the walnuts to fall from the tree, then let they dry out for about a week. After that you can crack them open and use as usual.

Why are walnuts so expensive ?

Hey careful, they don’t grow on trees you know ! Oh wait, they do.

Despite this, walnuts come with a surprisingly high price tag that may turn off some folks.

The main issues with growing and selling walnuts is that the demand is higher than the supply, and the production process is time consuming and kind of expensive. Let us explain.

When a walnut tree grows, it takes a very long time to mature. These are long-lived trees. They’re big, they’re tall, they’re wide and they bear ‘fruit’ very late.

It’s actually a bit similar to the reason asparagus is expensive – lots of careful planning and maintaining the farm before you can even get a first harvest. 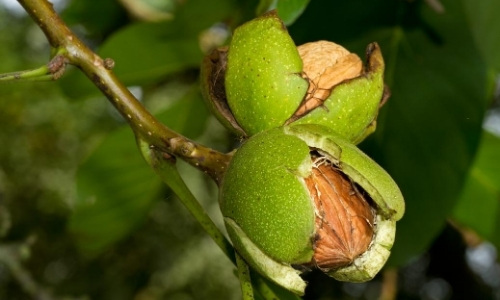 walnuts still in their green shell

So when a walnut does have its nuts ready, there simply isn’t enough to go around for everyone. You need vast swaths of land to grow enough walnuts to satisfy everyone, and that’s just not doable.

Add to that the fact that nothing will grow under the walnut (so much shade, and the leaves contain a natural herbicide), and you get a whole lot of land that can be put to better use.

Another very important point is that walnuts are rarely sold in their whole form, unless you go to a farmer’s market.

Most often you’ll find walnuts that are shelled, in vacuum sealed bags. It’s convenient, it’s easier for you as a consumer, and it’s much more expensive to make.

The nuts need to be cracked and the meat of the walnut kept safe, which is not easy if done by machine.

In almost all cases some manual labor is involved. either to crack and separate the nuts, or at least separate after a machine cracks them.

This means time and money spent on the workers this, which again raises the overall price.

So in short, walnuts are expensive because they take a long time to grow and yield anything, and when they do it’s not enough for everyone, and even that needs to be shelled and made easy to eat.

What can you do with walnuts ?

Walnuts are versatile and there’s so much you can do with them, from very simple dishes to using them as garnishes both in sweet and savory foods, and in salads !

Some of the best uses for walnuts are found in baking, at least in our personal opinion. A moist coffee cake with chopped walnuts and a bit of cinnamon. 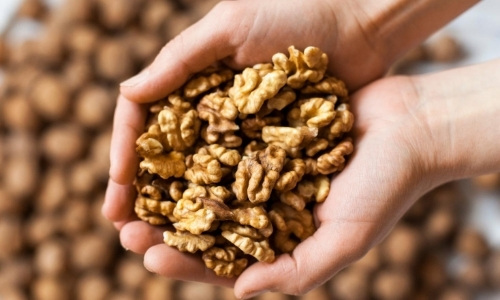 A very simple but delicious dessert is walnut caramel, and it’s good on its own !

If you’re making stuffing you can add chopped walnuts for some extra texture.

In short walnuts are great in any recipe where you need a bit of a crunch factor, and you can leave then whole if you like.

They’re also great as snacks, on their own. Roast them for a couple of minutes in the oven, and they taste even better.

How long do walnuts last ?

Walnuts are long lasting, like pretty much any nut or seed.

But you need to be careful about the way you store them.

If properly stored, walnuts can last up to 6 months, shell-on. The shell protects the meat from the elements, like direct sunlight and water.

But what if your walnuts are shelled ? Well then they’re going to last less, somewhere around 1 month tops, before they start to take on an odd flavor.

Shelled walnuts need to be kept in an airtight container. They will lose their crunch and take on any other flavor around them.

A very important note: walnuts, like any nuts or seeds, are very high in fats. This means that when they go off, they turn rancid.

You’ll notice this happening when they start to smell a bit like paint, and if you’re brave to taste them they’ll be a little sour and bitter.

Walnuts are susceptible to heat and moisture, whether they’re shelled or not. So please store them in dark, cool, dry places like a very cold pantry, or the fridge.

If you’re buying pre-packaged walnuts, take a look at the ‘best before’ date. It should give you a good estimate of when they may start going off.

Just keep in mind that if you’ve stored them in the fridge, they might just last an extra couple of months paste that date.

You can always freeze the walnuts, but do it in small batches. They will release a lot of moisture when they thaw, and thawing too many at a time will create little pools of water that will eventually ruin them.

Walnuts are good up to a year in the freezer. Keep them in an airtight container, so they don’t take on that freezer flavor.