Salmon is one of the best kinds of fish available to the general public, and mercifully it seems to be boneless. At least when you go and buy a salmon fillet, or when you find smoked salmon.

But does salmon have bones ? Are they removed before the meat is sold, or is it one of those barely-boned fish that are a delight to cook ? Let’s take a look. 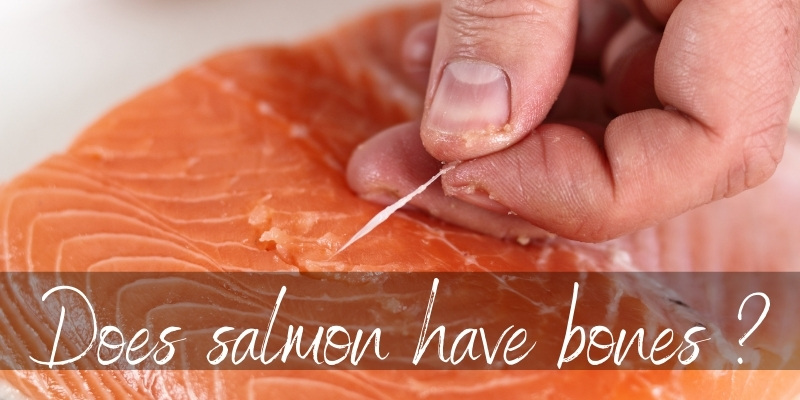 Table Of Content show
1 Does salmon have bones ?
1.1 Salmon fillets usually come without bones
2 How to remove pin bones in salmon
3 Can you eat salmon bones ?
4 What’s the white stuff in salmon ?
5 Is salmon skin edible ?
6 Conclusion

Does salmon have bones ?

Yes, salmon does have bones, both larger ones and pin bones. The fillets and steaks are cut and prepared in such a way that they usually have no bones, or the bones that do show are big, easy to see, and thus removed by the customer.

The small pin bones found in salmon are usually removed on the production line, as the fish is cut and sorted into different cuts. The pin bones are very thin, flexible, and are not connected to the spine.

The bigger, thicker bones connected to the spine may be found in salmon steaks. They are large, easy to avoid, so choking on such bones is a very low risk.

If you usually buy salmon fillet, then you’re most likely buying completely boneless fish. The pins are removed from the fish while it’s being cut. You can usually see a sort of shallow trench where the pin bones would start, in the meat. They are removed with tongs, and you should usually notice a sort of shallow ridge, made of small holes.

Those holes are the exit points of the pin bones, since picking them out is pretty much just tearing them out of the flesh. If your salmon fillet still has bones, you can usually feel it by running your finger firmly across the meat. Any bones will stick out and poke your finger.

How to remove pin bones in salmon

If your salmon has any bones, and you’ve identified them, you will need tongs or pliers. Something much stronger than a tweezer. Lay the fillet skin-side down, and identify each bone by running your finger across the meat until you find them.

Gently press down on the meat right next to the bone, it should protrude a bit. Grab the end of the pin bone with the pliers or tongs, and with your other hand keep the meat flat. Yank hard, in the direction of the bone. It will offer some resistance at first, but it’s not connected to anything, so it will come out.

There will be a small gash where you removed the bone. It does not affect the cooking time or quality, but it may affect presentation just a little.  If you want, you can present the salmon with that side down. 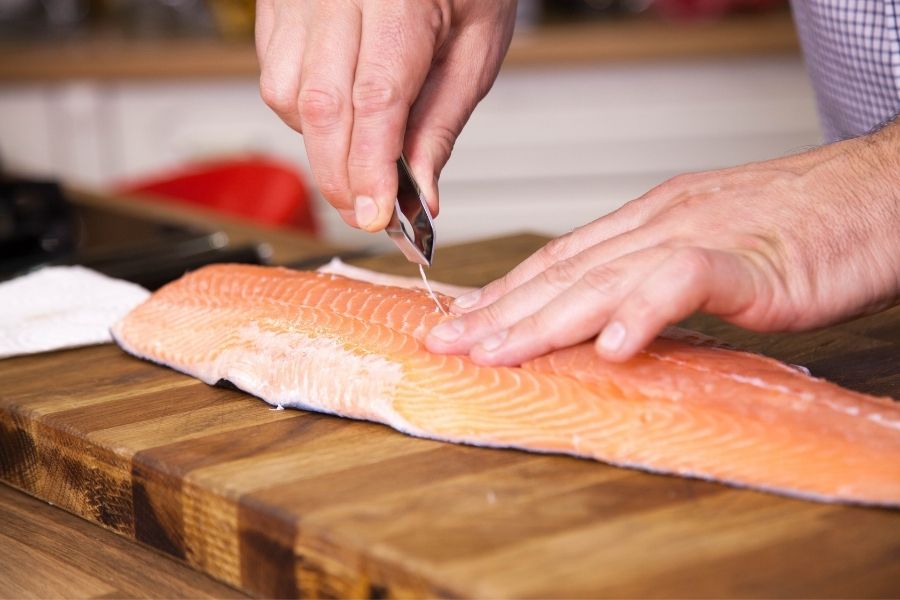 Can you eat salmon bones ?

If you do happen to eat salmon bones and haven’t noticed, chances are you’re going to be fine. The pin bones are thin, soft, and flexible and will eventually be digested by your stomach acid. If you don’t feel anything stuck in your throat, or hurting somewhere, it’s likely already in the stomach and being digested.

A lodged pin bone can be helped along the way with a small piece of bread, to push it down into the stomach. However, if you’re experiencing any sort of pain or discomfort, go see a doctor and they will help remove the bone. Pin bones are soft, so they should pose no real problem.

What’s the white stuff in salmon ?

Whenever you’re cooking salmon, you’ll notice a white substance oozing and coagulating, often towards the bottom of the cut of meat. That’s a form of protein, called albumin; very similar to the structure of egg white.

It’s present in all kinds of meat, but it’s most noticeable when the meat is cooked at a slower rate and there is a lot of moisture present. For example if you’re cooking with the lid on, or you’re boiling meat.

When boiling meat, you’ll notice a foam appearing on the top. That’s the albumin with a bit of leftover blood, simply coagulating as it cooks. There’s nothing wrong with it, you can leave it in the pot or the pan, or you can skim it off. Some people are put off by it, some are fine with it.

Back to salmon, you’ll notice that if you let the salmon cook long enough, the albumin will eventually cook long enough that it will break away from the meat. It is edible, if you decide to have it. This doesn’t mean there won’t be any protein left in your salmon, the meat itself is still made up of protein and fiber.

Read Also: Do Shellfish Have Bones ?

Salmon skin is edible, as long as you remove the scales and cook it properly. In fact the skin of these fish is so thin it can even get very crispy if cooked, so it may come as a pleasant surprise for some people.

Even if you don’t end up eating the salmon skin, you can leave it on and remove it at the end. It’s a much easier way of removing the skin than trying to cut it off with a knife. Much less waste involved, and you get a perfectly cooked salmon to boot !

Again, make sure the scales are off. You can remove them by running a knife across the scales, against the grain. Make sure your sink is plugged and you remove the scales before unplugging it ! No one wants a fishy clogged sink.

All in all salmon is a very user-friendly fish that’s both easy to eat and delicious in flavor. It’s not the overly fishy kind of taste most people would avoid. And it usually comes with the bones removed ! Even if salmon is one of the more expensive fishes on the market, it’s definitely worth the splurge every now and then.

So, we found out that salmon does have bones and it is not ok to eat them, however, there are chances that you will be fine if you accidentally swallowed salmon bones. If you don’t feel any pain or discomfort while eating, you should be fine.