Do you have a recipe to make with gram flour and you don’t have any, don’t worry there are quite a few substitutes you can use for it.

With the increasing popularity of vegan, vegetarian, and plant-based dietary trends, more and more people are looking for substitutes for various kinds of food such as meat, eggs, and dairy.

Baking products are no exemption from such demand. There is an ongoing debate about whether or not white flour is vegan-friendly, and many have been using other kinds of flour as a replacement. One of these stand-ins is the gram flour.

Coming from South Asian cuisine such as Pakistani, Indian, and Bangladeshi, the gram flour is made of split brown chickpeas or chana dal.

They are also commonly referred to as besan and are yellow and powdery in appearance. The gram flour can bring out a variety of tastes when used in different dishes.

However, if you don’t have access to gram flour, what is a suitable substitute? 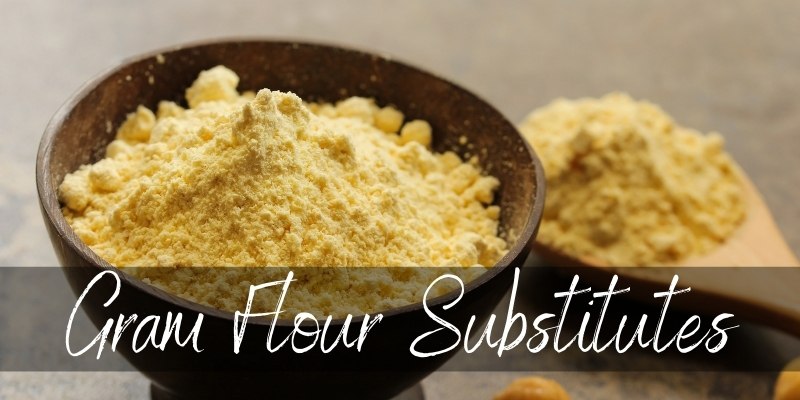 The best gram flour substitutes have to be those made from other similar legumes, like chickpea flour, lentil flour, quinoa flour, soybean flour, tapioca flour, or buckwheat flour.

These flours are great for those with celiac disease because they’re gluten free. Not only that, but each of the flours provides slightly different flavors, so they can put a nice twist on the dish you’re preparing.

A little bit about gram flour

Do not confuse gram flour with graham flour. Graham flour is made of wheat, and named after Sylvester Graham who decided to grind whole wheat more coarsely.

Gram flour is made from besan, a very close relative of lentils. In addition to its earthy flavors, gram flour is also great for people with celiac disease. These are people whose digestive systems are intolerant to gluten.

Gram flour is gluten-free and high in protein compared to regular white or wheat flour, which can be unfavorable in celiacs’ stomachs. Gram flour is also filled with essential minerals and vitamins such as fat, fiber, iron, and phosphorous.

When interacting with other ingredients used within a recipe, the besan is able to decrease the forming of unhealthy compounds in a dish.

In order to come to a conclusion on good substitutes for the gram flour, it is best to learn their uses and what they are good for, to find other kinds of flour that can provide the same benefits.

Read Also:How To Substitute Almond Flour For All Purpose Flour

What can be used instead of gram flour?

There are several substitutes for gram flour, depending on whether you are looking specifically for a vegan or gluten-free alternative.

Quinoa is a grain that is becoming increasingly popular. You can get your own quinoa and grind it up yourself to use as flour.

It is great because it is gluten-free and celiac friendly. Quinoa flour is best used in muffins, pancakes, pizza crusts, and as a thickening agent when making sauces and soups. 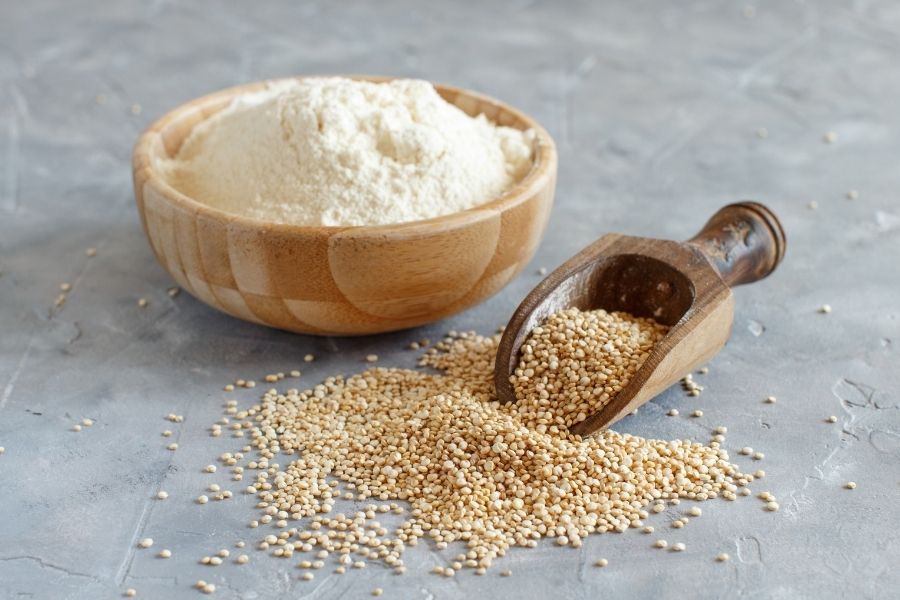 Tapioca is made from cassava, or yuca, a root vegetable. It is high in starch and mainly composed of carbohydrates.

It is also vegan and gluten-free, so it is perfect for people who are highly allergic to certain foods. Tapioca flour is best used in fries, burgers, tortillas, cake, and tacos.

Buckwheat is a pseudo-grain that’s completely gluten free and provides a nutty flavor that may be what you’re looking for. It’s higher in fiber than the other flours on this list, but it will still work very well. In a way it works very similar to oat flour.

Lentils are a common kitchen ingredient, and you’ll find more and more lentil flour based food items, like pasta for example. In terms of taste and texture, lentils are very similar to split chickpeas so these will work well.

A bit more difficult to find, soybean flour is very high in protein so it will provide a nice boost to your meals. It may impart some soy flavor, so make sure you’re okay with soy before using it. 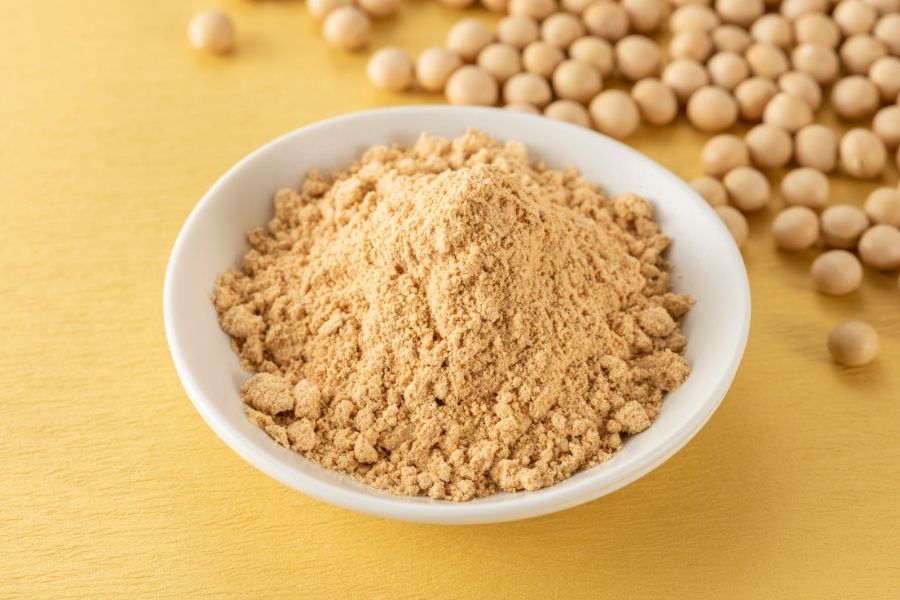 Are gram flour and chickpea flour the same?

A common misconception about the gram flour is that it is the same thing as chickpea flour.

This may be because gram flour is made of chickpeas, but it matters what kind of chickpeas are used.

As aforementioned, the besan is made of split brown chickpeas. Chickpea flour, on the other hand, is primarily composed of white chickpeas that are finely ground up. Even though the two may provide a similar taste, they are inherently different flours.

The main difference between the usage of brown chickpeas and white ones is the response to water. White chickpeas yield a coarser texture.  If you are using it for baking purposes, it usually takes more water in order for the white chickpea flour to turn into the batter.

On the other hand, the besan has a very fine texture and will require less water than the chickpea flour when used in baking. Depending on the usage and the taste you are going for, chickpea flour may be a fitting replacement for gram flour.

However, if you are looking for a specific reaction to water that only the gram flour can provide, chickpea flour is not the substitute.

Can you make your own gram flour ?

It is possible to make your own chickpea flour. If you would prefer gram flour, you can get dried split brown chickpeas from the Asian supermarket.

Alternatively, you can quickly roast regular white chickpeas and leave them to cool before continuing with the following steps.

Place your dried chickpeas in a food processor. Grind for 2-3 minutes until it becomes powdery.

Use a sieve to sift the flour you just created into a bowl. This separates the larger chickpea chunks that the food processor could not break down from the softer flour.

Put everything that didn’t fall through the sieve in a spice grinder or coffee grinder. Grind these in batches, a little at a time. Repeat the process with the entire batch of flour

As with all flours, keep your homemade gram flour in an airtight container and store it in the cupboard or anywhere in the kitchen that is cool and dry. Use within 24 months of production, and make sure it’s very well sealed.

Gram flour/besan use in cooking

The gram flour is famously used in various dishes. They act as the perfect coating for deep-fried food, as the end result yields a crispy and savory layer.

For example, besan is an essential ingredient in the vegetable pakora, an Indian deep-fried vegetable fritter snack.

Though they are savory, you can also use the gram flour in breakfast dishes. The besan toast, or bread pakora, is a quick and simple savory breakfast item, perfect for busy days. The only ingredients required for this dish is bread, gram flour, and Indian herbs and spices.

Gram flour is also commonly used as an alternative to eggs in vegetarian and vegan cooking.

Another breakfast item that utilizes the besan is a vegan besan scramble. With this recipe specifically, chickpea flour can be used as a replacement.

To create this dish, mix gram flour with water, nutritional yeast, flaxseed meal, paprika, turmeric, salt, and baking powder. Scramble the mixture in a skillet as you would an egg, and serve with toast and some veggies on the side.

Not only useful for savory cooking, the gram flour is also a great ingredient for baking, as it is normally used as a vegan alternative.

Something you can try baking at home is the vegan peanut butter bars, which only takes 10 minutes to prepare and 15 minutes to cook.

These delicious treats include ¼ cup of gram flour, oats, alt milk, peanuts, peanut butter, vanilla extract, and coconut milk. Mix all the ingredients in a mixer and put them in the oven for 20 minutes at 350 degrees Fahrenheit.

A popular vegan dessert that incorporates the gram flour is the vegan chickpea cookie dough.

These are very simple to make. Throw in all the ingredients needed in a mixer: gram flour, chocolate chips, maple syrup, vegan butter, oat flour, and vanilla extract. Then, once thoroughly mixed, you can grab a spoon and eat it as it is.

There are at least 5 great alternatives to the gram flour, but depending on what you plan to cook/bake some of them may work better in your situation. I hope this article showed you which one to use in the specific situation you are in.