Havarti is a Danish cheese, and one of the best types of cheese to have with your favorite drink. But what if you run out of it? In case you’re looking for a Havarti cheese substitute, we got you covered!

This is undoubtedly a stellar cheese. Most of you will agree on this fact because it makes a perfect snack for everyone and goes great with most things.

The best quality of Havarti cheese is, it can please everyone with its perfect texture and taste. This is the reason why it is on the best cheese platters.

Coming to the main question, what are some substitutes for Havarti? Let’s find out! 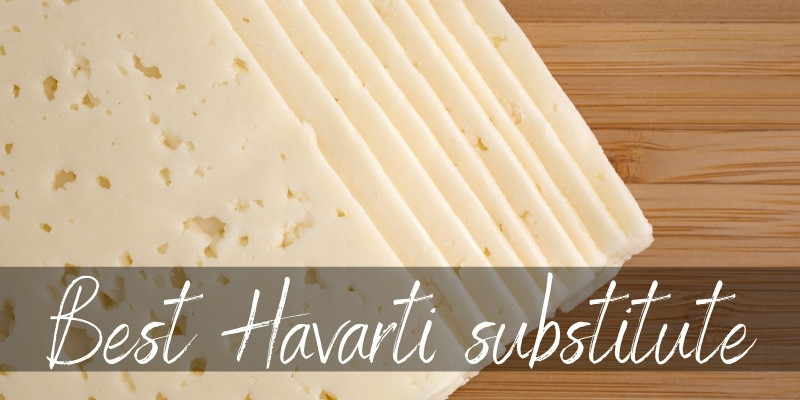 The main reason these cheeses go well to replace Havarti in a recipe is because they’re all mild cheeses. Havarti is a mild, creamy cheese with a bit of a springy texture.

You can use it in sandwiches, on a cheese board, eat it b itself, or melt it into a fondue. It goes well with everything, so these substitutes will help cover you.

Keep in mind that each substitute is different, and may work better in certain scenarios. Now let’s get to the.

Tilsit is the closest to Havarti in terms of flavor and appearance, and it’s fairly easy to find, especially in European markets. If you’re not from Europe you may still find European markets in larger cities, and might even find Tilsit as an import cheese.

This cheese is great for pretty much any scenario in which you’d use Havarti, since the difference is very small. 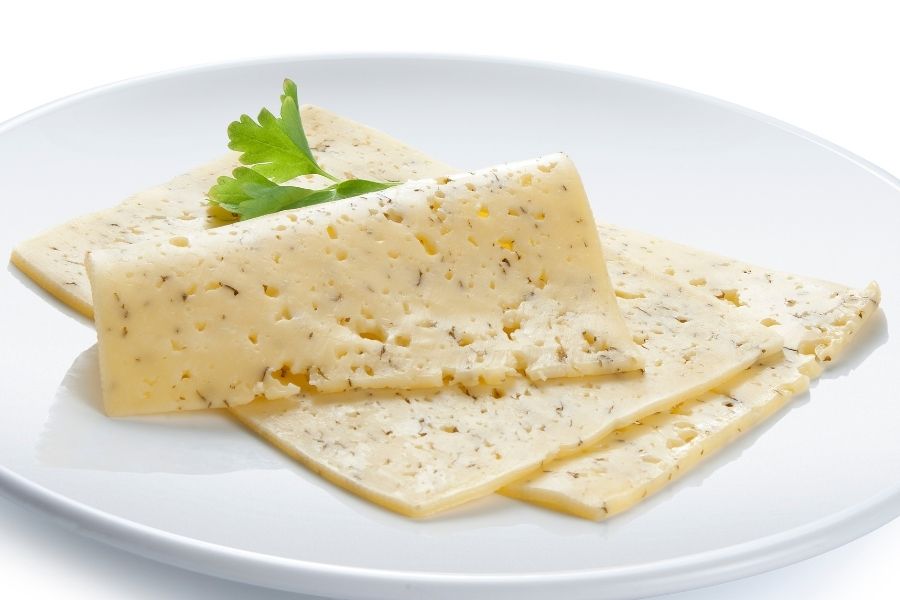 Saint Paulin is a lesser known cheese, and comes from France. This cheese is very similar to Havarti in that it’s a buttery semi-soft cheese that cuts well and melts very well, much like Havarti.

This is a slightly aged cheese, so its flavor may be a bit deeper and stronger than Havarti. It’s best to use it on cheese boards, but it melts very well.

Another Danish cheese, Esrom will also work great as a substitute for Havarti. This cheese is also buttery, has a springy texture and melts very well. Just like Saint Paulin and Tilsit, feel free to use Esrom in the same way you’d use Havarti.

You may also find Esrom named as Danish Port Salut, so keep your eyes peeled.

You can use Jack in place of Havarti easily, but keep in mind that the texture is different. Jack is a it harder than Havarti, denser, but melts very well and has a great, mild flavor.

You can substitute Havarti with Cheddar as they are close in flavor and texture. Be sure to get young Cheddar, as the aged one will have a very strong flavor.

Do not use sharp Cheddar, since that will again be very different from the creamy, buttery flavor of Havarti. If you see the Cheddar is orange, it will not be a good substitute because it contains annatto.

Annatto is a spice that gives color and flavor to Cheddar, and when trying to substitute Havarti it won’t work.

A good, young, white Cheddar can substitute Havarti in fondues on grilled cheese, but it has a slightly firmer texture.

You can also replace Havarti cheese with Emmental. It also has a firm texture and mild flavors of butter with fruity notes to it. It is perfect for serving with sharp drinks of your choice.

Emmental will melt just as well as Havarti, but it has a bit less of a springy texture. It goes great in sandwiches as well.

Colby is fairly similar to Cheddar, young Cheddar to be specific. So it will work just as well to replace Havarti in your recipe. It’s a bit harder than Havarti and definitely milder so it will not overpower anything.

Both Colby and young Cheddar are easy to find if you’re in any English speaking country.

Edam cheese is very similar to Havarti, except for being a Dutch cheese. Even so, it’s mild, buttery, vaguely sweet and nutty.

Yet another Dutch cheese, Gouda is perhaps the most common cheese you can find on the market. This makes it easy to use in place of Havarti, since it’s really mild.

It’s also sweeter than Edam and has a bit of a fruity note, but it will work well in place of Havarti in a cheese board or in a cold sandwich, or a salad.

What is Havarti cheese?

For those who don’t know, Havarti is a type of semi-hard cheese and has a mild and subtle flavor. It is one of the most versatile cheeses you can have.

Havarti is Danish cheese which is very similar to Tilsit. It has a creamy white color and has little holes on the block. The cheese got its name from a farm in Denmark on which it was developed.

It is one of the most versatile cheeses in the world. You can have it with a drink and can use it for various recipes. It is perfect for cheese platters, sandwiches, fondues, quesadillas and what not. About the texture and flavor, it has a very rich buttery flavor and semi-firm texture.

Moreover, you can also find it in different flavors such as garlic, pepper, dill, horseradish and chives etc.

Havarti cheese has a very rich and smooth flavor. It doesn’t have any rind, you can directly slice it and have it with your favorite drink.

It has a pale yellow color and has many little holes. The cheese smells very buttery and slightly nutty. Further, it is available in different varieties ranging from mild to very sharp and flavorful.

It also offers a very good tartness which has a perfect middle ground of acidity between Monterey Jack, Muenster and Butterkase cheese.

Because of its amazing mild flavor, it offers a blank canvas for experimenting with various flavors. You can find it infused with various herbs and seasonings. Some of its famous flavored varieties include dill, chives, mint, caraway seeds, peppers and horseradish.

How to use Havarti cheese

Because of its ability to blend with various flavors and spices, it can be used in a variety of ways. The buttery taste with notes of acidity, it can be paired with a variety of food items.

You can either have it on its own or shred it over your pizza instead of other cheeses. Further, it gives your burgers an extra cheesy kick and your macaroni a richness. If that’s not enough, you can even use it in your desserts. It makes a wonderful cheesy fruit casserole.

Basically, it depends entirely on your taste and creativity, you can use it in millions of recipes.

Serve it with wine and other drinks. Perhaps the best way to have Havarti cheese is having a slice of it with a fresh glass of red or white wine. It cuts off the strong taste of wine with its creamy and buttery flavor.

It is a perfect addition on the cheese boards, arrange it with some whole wheat or butter crackers, grapes, apple, pear and mixed nuts. Also, if you’re planning to include other cheeses in your cheese party, then don’t forget to include Gouda, Cheddar and blue cheese for contrasting flavors.

Further, it goes pretty well with all kinds of red and white wines. It can stand up the highest alcohol content very well.

Havarti cheese also goes well with almost all types and varieties of beers. From mild to strong, it can withstand the sharpness of every drink.

Can I substitute Havarti for Cheddar in sandwiches ?

Basically you can choose any cheese for your sandwich recipe. However, if it’s specifically a Havarti cheese sandwich then replace it with young Cheddar.

However you would get better results if you got the closest substitutes: Tilsit, Saint Pauli, and Esrom.

Is Havarti a mild cheese?

Yes, it is a mild cheese. It is one of the most famous cheeses from Denmark. It is rich, creamy, buttery and semi-soft. It is usually made from cow’s milk and is aged for a good three months.

Depending upon the aging period, it is available from sharp to mild flavored varieties.

Mozzarella is a soft cheese that has a crumbly texture. Depending upon its variety it can range from creamy to sharp. Also, it is slightly saltier and less acidic. 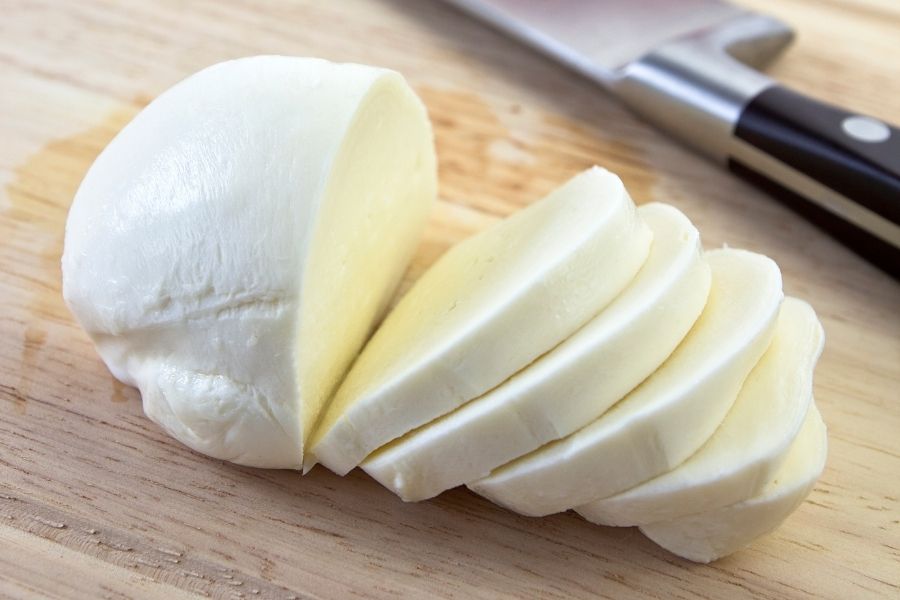 On the other hand, Havarti has a semi-soft texture but a buttery aroma and flavor. Although it is slightly different from mozzarella, you can use it for your pizzas in place of shredded mozzarella cheese.

There are many good substitutes for Havarti cheese and depending on what recipe you are going for you can choose the one that suits you the best in that specific recipe from the list above.

Many people are curious if Havarti is anything like mozzarella, and as I said it can be substituted on pizza but other than that there are other cheese types that work better as an alternative.