Of all the kitchen items at your disposal, rice is one that folks claim could save your life in the event of a fire.

But is it true ? Is such a common, easy to find ingredient able to put out a fire ? Or is it as flammable as anything else ?

Seeing as most people have at least some kind of rice in their kitchen (us included), we thought this topic really deserves attention.

So this is what we’ll cover today, because if it’s true it may actually be very handy.

It may depend on the size of the fire, and how much rice would be on the fire, but in nearly all cases it would burn and spread the fire even more.

Rice is a very common household item, and present in kitchen or panties throughout the world.

It won’t, unfortunately, save anyone from a fire. All dry rice can do is make a fire worse.

Why does rice burn ?

Rice is a carbohydrate, much like flour, cellulose, and cotton.

Don’t think of the culinary version of carbohydrates, although that’s not very far from what we mean.

Chemical carbohydrates are derived into saccharides, which includes table sugar among other things.

Any carbohydrate will burn, and so it’s flammable, and here’s why.

At very high temperatures – including a grease fire – sucrose breaks down and forms a compound called hydroxymethylfurfural.

This compound is highly flammable and will set the rest of the sucrose or cellulose on fire quickly.

There was a case of a sugar silo exploding back in 2008, and it was devastating.

When you’re melting sugar in a pot to form caramel, you use a very low heat setting. It won’t catch fire, because the heat is low.

High enough to melt the sugar, but low enough to not dry it out all at once and have it catch fire.

If you were to make caramel over a very high flame, and leave the pot unattended the sugar would eventually catch fire due to the high heat.

The same is true for very small surface carbohydrates, like flour or sawdust.

Read Also:Here’s Why Rice Is Grown In Water 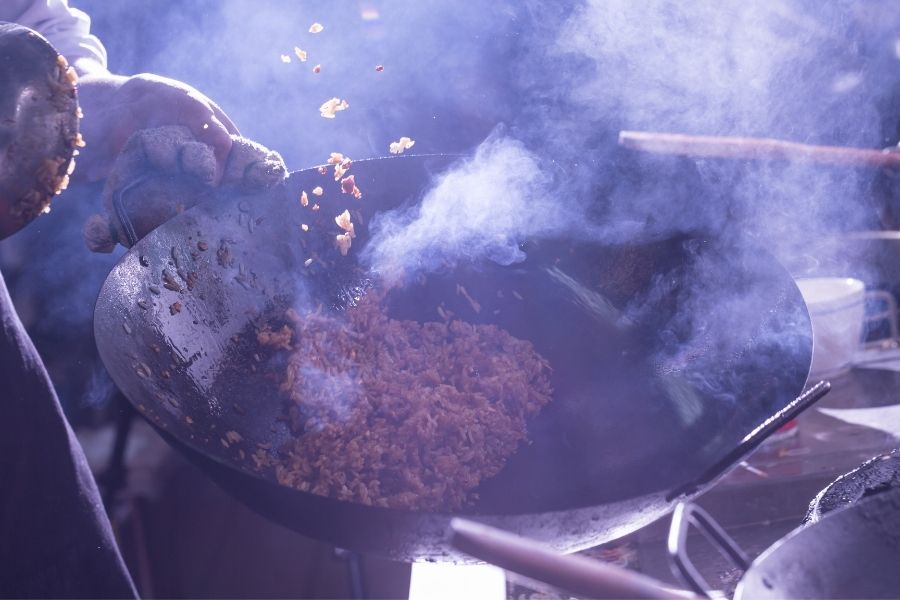 Why do some say you can put out a fire with rice ?

We don’t recommend trying this at home.

The theory goes that if you throw enough rice on a fire, it will suffocate. And that could be true, in theory.

You would need a very large amount of rice, compared to the size of the fire.

Also, the fire itself should be a pure, plain fire. If there is any grease in it, the rice will be coated in grease and catch fire as soon as it touches the fire.

The reason folks say you could put out a fire with rice is because they haven’t tried it themselves.

Rice does not act like sand or dirt, which cannot burn. Throwing rice on a fire may only work if you’ve got an insane amount of rice to suffocate the fire. That’s more than one bag.

There is the option of cooked rice, which some suggest would help put out a fire.

Cooked rice is full of water and may suffocate a fire’s oxygen intake, but if the fire is too strong it will eventually burn. Not what you’re looking for.

All carbohydrates burn, and even a soaked carbohydrate will burn if there isn’t enough moisture or water to put out the fire and cool it down.

As with the case of dried rice, you’d need a very large amount of cooked, very wet rice to put out a fire.

Again, not something that’s likely to be effective so don’t try it.

Rice burnt at bottom of the pot ?

A good question would be in regard to the burn rice at the bottom of a pot.

You know the situation, everyone’s burned the rice when they were just learning how to cook the perfect pot of rice.

The risk of a fire catching from a pot of burnt rice is low, but only because the entire pot needs to be dry and the heat needs to be very high.

When you’re cooking rice, it’s on a low setting and it won’t catch fire unless you leave the stove on max.