Parsley and coriander are some of the most common herbs you can use in cooking. Not only are they delicious and full of flavor, they’re also incredibly confusing.

Often folks can’t tell the difference between parsley and coriander, and that’s reasonable. They look very similar and they’re used in similar ways, so what sets them apart ?

This is what we’ll be covering today, so let’s get to it. 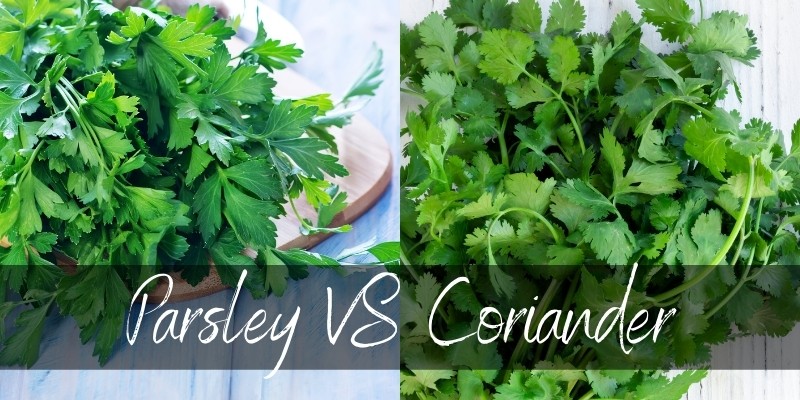 Parsley and coriander are different herbs, but they behave pretty much the same. Both herbs are heavily used in western cooking, with parsley being more in line with the European style dishes.

Let’s get a few basic facts about both herbs, before we begin comparing them.

Parsley is a herb originating from the Mediterranean basin, including Northern Africa and the coast of Turkey. As such, you’ll see it heavily used in the cuisines form those regions.

It has a very vegetal, herb-like flavor that reminds you of vaguely of mint without the menthol.

Coriander (also known as cilantro) is thought to originate from the Western part of Asia, and may have crossed over into Eastern Europe as a result.

In terms for flavor it may remind you of a citrus or lemongrass flavor, crossed with a herb flavor. Some folks despise the flavor, so if you’re not sure which is which you may taste it and immediately know.

Coriander has a stronger flavor than parsley

A very important point when deciding between coriander and parsley is their flavor. While parsley has a herb-like flavor that may feel fresh and minty, coriander is a different story.

Coriander (or cilantro) has a much stronger flavor, reminding you of a herby lemongrass. Some folks claim it tastes kind of like soap or detergent, so that may give you an inkling.

Don’t be fooled though. Both parsley and coriander have a definite herb or vegetal flavor, it’s just not the most prominent note.

When in doubt, you can smell the leaves to see which is which. Parsley leaves will smell less than coriander. You ca also pinch and rub the leaves between your fingers, to get a clearer aroma.

If you want to add just a bit of flavor, then parsley would be your best bet. It’s flavorful but won’t overpower your dish, and the leaves are more delicate than the stems.

Coriander is much stronger and will definitely provide lots of flavor, so use sparingly or in dishes that require lots of seasoning. Dishes like venison or a very hearty stew are better suited to cilantro than parsley.

If cooking something more subtle, like paella or something with chicken, use parsley as it won’t take over the whole dish.

In the same vein, very flavorful foods such as Indian or Chinese will hold up to cilantro very well.

Read also: Can You Eat Raw Parsley ? Here’s What We Found

Another way to tell parsley and coriander apart is to look at the leaves. They may look similar, coming in bunches of three, but the leaves do have their differences.

Parsley leaves are the most common. They’re long and thin, especially if you’re dealing with flat leaf parsley. They have three leaves on each stalk, each leaf ending in three ‘fingers’.

Coriander also has three leaves, but they’re much more rounded and the ‘fingers’ aren’t long, they’re rather short and stubby and lacy towards the ends. 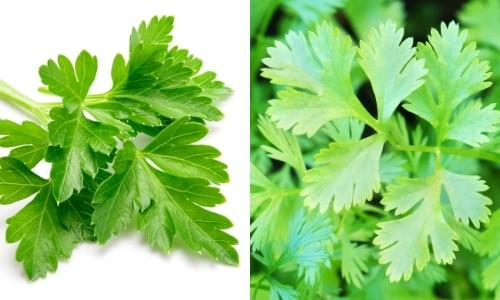 Coriander and parsley are great garnishes

Both cilantro and parsley are great looking herbs. They’re made a name for themselves in international cuisine, and have strong fanbases.

If you’re looking for which herb to garnish with, the answer lies in your own personal preference, and what you expect from the garnish.

For example, parsley is a much milder flavor than cilantro. If you’re going to eat the garnish – some folks simply put it aside – then you may want a milder flavor, depending on the dish.

If you’re trying to reinforce the flavor of the dish with your garnish, you can use cilantro if it fits with the overall flavor.

And if you’re trying to add garnish simply for presentation sake and don’t care about flavor, then use curly parsley. This is a type of parsley that will definitely get people’s attention. It’s much milder than flat parsley, and more visually appealing.

In any case, whichever herb you use for garnish, keep in mind that some folks may eta the garnish, some may put it aside. If you have anyone that hates cilantro attending, it may be best to use parsley.

Read also: Curly VS Flat Parsley – How To Choose, And Which Is Better ?

What about dried parsley and coriander ?

Both coriander and parsley can come in their dried forms. Their overall flavor will be much duller, and as any herb they should be added towards the end of the cooking time.

They rehydrate very quickly but lose flavor fast if actively cooked (unless you add a lot).

In terms of which to use, the flavor of parsley diminishes when dried and rehydrated, resembling fresh cilantro so you may want to keep that in mind.

As for dried and rehydrated cilantro, it’s going to have more of a soapy/lime flavor so only use it if you really love cilantro.

What to know before buying coriander and parsley

There are a few things you should keep in mind when shopping for herbs, including coriander and parsley.

Both are best in their fresh forms, so try to look for locally grown bunches. These will often be found in farmers’ markets, so try to avoid buying from supermarkets if you want really fresh herbs.

Look for discolorations on the leaves, there should be none. If you see any black, yellow, or white spots, steer clear of them.

Both cilantro and parsley are a deep, vivid green and should be presented to you in a tied up bunch, with the stems still wet from being kept in water.

Do not buy wilted or wilting herbs, be it cilantro or parsley. The flavor isn’t the best, and you have a better idea to get them fresh if you go early in the morning, as opposed to after work. In this regard, the weekend may be your best bet to have such free time.

If you do manage to get your hands on fresh cilantro or parsley, congratulations ! You can keep the bunches in a plastic bag in the fridge for up a week and use as needed.

Or, you can chop the fresh herb as fine or rough as you like, and store it in an airtight container in the freezer for up to 12 months. You can’t use the frozen ones for garnishing, but they will definitely give the food flavor.