Eggplants get a bad rap for being bitter, bland, or just gross. But often it’s just the result of bad cooking, and not necessarily the eggplant’s fault. The best way to get eggplant’s true flavor is to roast it. But when it comes to cooking eggplants in general, should you peel it ?

Is the skin edible, or is it dangerous ? Does it cook differently without the skin ? Let’s take a look at how to handle eggplants when cooking them, to make sure you get the best flavor possible. 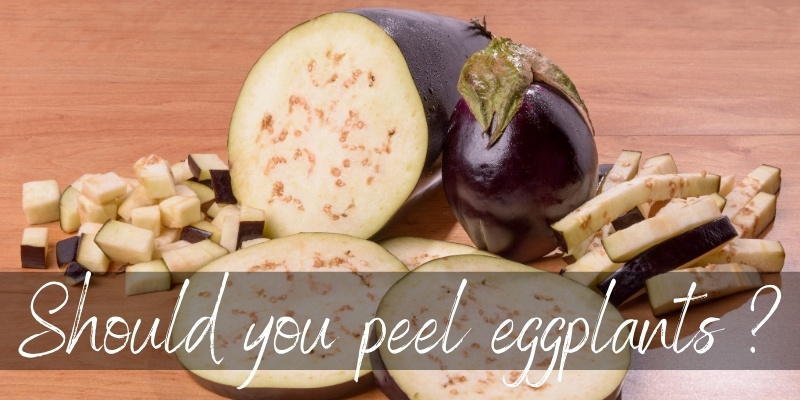 Table Of Content show
1 Should you peel eggplants ?
1.1 Roast eggplants whole, skin-on
1.2 Peel if presentation matters
2 Can you eat eggplant raw ?
3 Should you salt eggplants before cooking ?
4 Should eggplants be brown inside ?
5 Common eggplant cooking mistakes
5.1 1. Adding too much or too little oil when cooking eggplants
5.2 2. Overcrowding the pan with to much eggplant
5.3 3. Expecting it to have more texture

Should you peel eggplants ?

Eggplants can be cooked with and without their skin, but most often the skin is left on. In some cases it’s the best way to cook it, like when roasting the eggplant. In other cases, where you need to maintain a certain look, a peeled eggplant may be a better option. In that case you may peel the eggplant.

And yes, the skin of an eggplant is edible, especially the skins if younger, tender veggies that didn’t have time to harden and become leathery. If you have a nightshade allergy the entire vegetable is not edible, with or without the skin.

When you roast eggplants, you need the skin on. You rely on it to keep the content inside, and it keeps a lot of moisture inside as well. This makes peeling the eggplant much easier, especially of you salt it to bring out moisture and soften the skin.

Read also: Why Are My Mashed Potatoes Gummy

If you were to roast the eggplants peeled you’d get a creamy, loose mess that would also burn right there on the grill.

It’s not just roasting that asks for the skins to be kept on. When you’re sauteeing, grilling eggplant slices, even just making ratatouille, you need the skin on to keep the whole thing intact. You see, eggplant turn very creamy and mushy when they’re cooked. If you don’t leave the skin on, they’re much more difficult to handle. 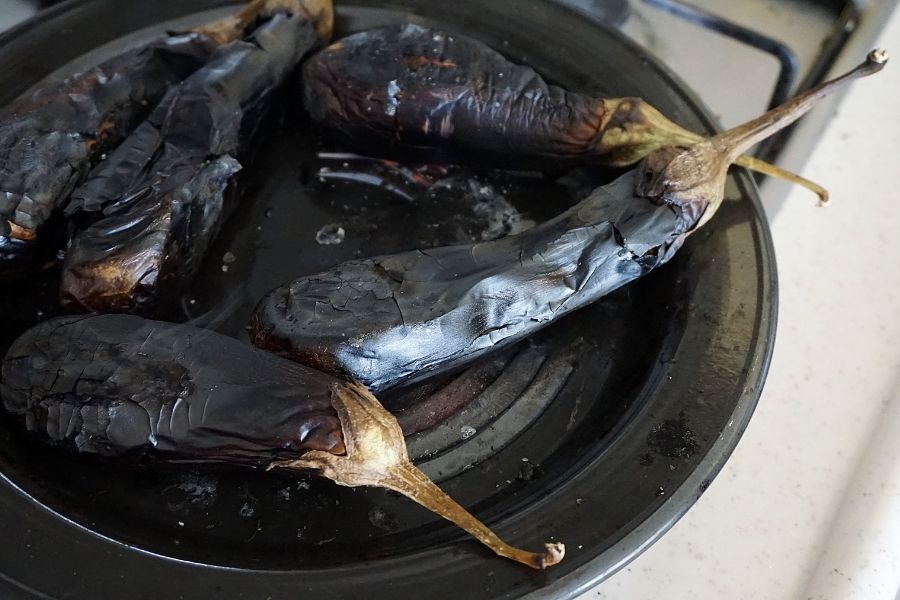 In some cases, when you’re trying to incorporate eggplant into the dish and want to keep a certain look, you may need to peel the eggplant. For example in risottos and pilafs, where you may want to keep an uniform color, the skins may contract the rest of the food.

There are some mashed potato recipes that add creamy, roasted eggplant to the mix for an extra bit of flavor. There you need to add only the creamy middle of the eggplant, and not the skins themselves.

Can you eat eggplant raw ?

Eggplants may be eaten raw but they have a very difficult texture. They’re much like a dry sponge and will absorb any oil and liquid you put onto them. That being said, raw eggplant has a higher chance of tasting a little bitter, and it’s difficult to pair it with something.

In general, eggplants taste better when cooked, even if not all the way.

Should you salt eggplants before cooking ?

It’s a good idea to salt eggplants before cooking them, for several reasons. First, you draw out any extra moisture that will prevent them form cooking fast enough. Second, adding salt improves the flavor, or rather it makes the flavor easier to detect by our taste buds.

And finally, some eggplants, especially older ones, may be a little bitter. Adding salt to draw out moisture will also draw out a good portion of the bitterness. This leads to better eggplants, no matter how you’re cooking them.

All that being said, for the past few decades eggplants have been bred to have as few seeds as possible, and not be bitter. This means that for the most part you don’t need to actually salt them before cooking. Salting was primarily used to remove bitterness, but nowadays it’s no longer necessary. Still, you never know when you run across a bitter eggplant and wish you’d salted it.

Should eggplants be brown inside ?

A little brown on the inside of an eggplant is fine, especially around the seeds. If your eggplants are mostly brown they’re no longer good, or on their way to not being good, since they’re either too old or have been harvested quite some time ago and are reaching the end of their shelf life.

Even so, if the raw eggplant does not taste bad when you touch it to your tongue, you can cook it. If you’ve stored your eggplant in the fridge for a week before use you’re very likely to have it a little brown on the inside, around the seeds.

As delicious as eggplants are, they’re really mysterious and hard to get right. So let’s take a look at some of the most common mistakes people make when cooking eggplants, so you don’t make them.

1. Adding too much or too little oil when cooking eggplants

Eggplants are notorious oil soakers. No matter how much cooking oil you add, there’s almost never any of it left in the pan. So you add more and then it’s all gone too. Why ? Eggplants are built like a very dry sponge, so they will absorb all the moisture and oil you throw at them.

If you cook the eggplants without any cooking oil, they will dry out and stick to the pan. The best way to cook eggplants is to use as mush oil as you normally would for other vegetables. Just lightly brush them on either side, cover, and let sit until they can be flipped. Trust the eggplants, they will still brown and flip if you ad a small about of oil.

2. Overcrowding the pan with to much eggplant

When you’re trying to get perfectly brown eggplants, keep in mind they will still soften. Still, you don’t want to add too many eggplant slices in the pan at once, as they will cook slower. Space them out and, if you cover them, leave the cover off for the last few minutes.

3. Expecting it to have more texture

Eggplants are creamy vegetables when cooked, and there is no way around it. When if you undercook them, you’ll notice they easily break down and tend to have a creamy feel to them. So if you’re adding eggplant to the mix in the hopes of getting more texture and bite from you veg, you’re using the wrong one.

Eggplants are there to smooth things out. If you want a harder, crispier vegetable go for potatoes, turnips, carrots. And that’s pretty mush it about whether you should peel your eggplants or not. We never peel our, since we rely on the skin to keep the creamy insides together.