When cooking, you sometimes have to look for substitutes, for various reasons. Some fruit and veg are easy to sub, while others are, well, very difficult to get right. Eggplant is one of those, and if you’re making a recipe that relies heavily on it, then you have few options.

Still, what are your options when substituting eggplant ? What can you use to substitute eggplant with, to bulk up a recipe to get a similar flavor ? Here’s our top list. 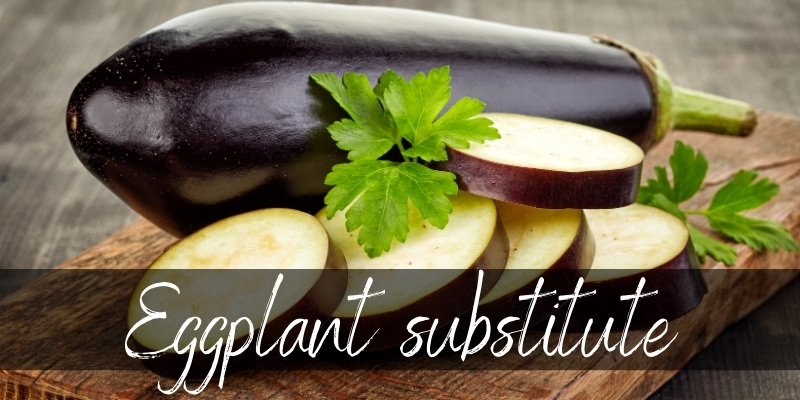 Table Of Content show
1 Best eggplant substitute
1.1 Zucchini or any squash
1.2 Tomato, roasted
1.3 Oyster mushrooms
1.4 Roast bell peppers
2 Do give other eggplant varieties a chance
3 Why your eggplant is bitter
3.1 You’re adding the bitter juice from roast eggplant
3.2 You didn’t salt the eggplant to remove bitterness
3.3 You got a very old eggplant
3.4 Roast eggplants are a little bit bitter to begin with
4 If you’re making ratatouille, fry the eggplant

The best eggplant substitutes are zucchini or any summer squash, tomatoes (sometimes roast), mushrooms, and roast bell peppers. Of course, the best thing would be to try and find an eggplant variety that’s a little different from what you’re used to. Maybe it will help the flavor.

Know that all of these substitutes will work one for one, and they will give you none of the eggplant flavor. You can get a similar roasted flavor with most of these, if that’s what you’re looking for.

Zucchini or any squash

You can use any summer squash in place of eggplant, but it’s not necessarily the same flavor. Not only are they very different plants, but they’re also different in flavor.

Still, a zucchini is much more neutral and more likely to be alright for everyone involved. If bitterness is what you hate in an eggplant, then be sure to cut off the ends of the zucchini and peel the outer layer. 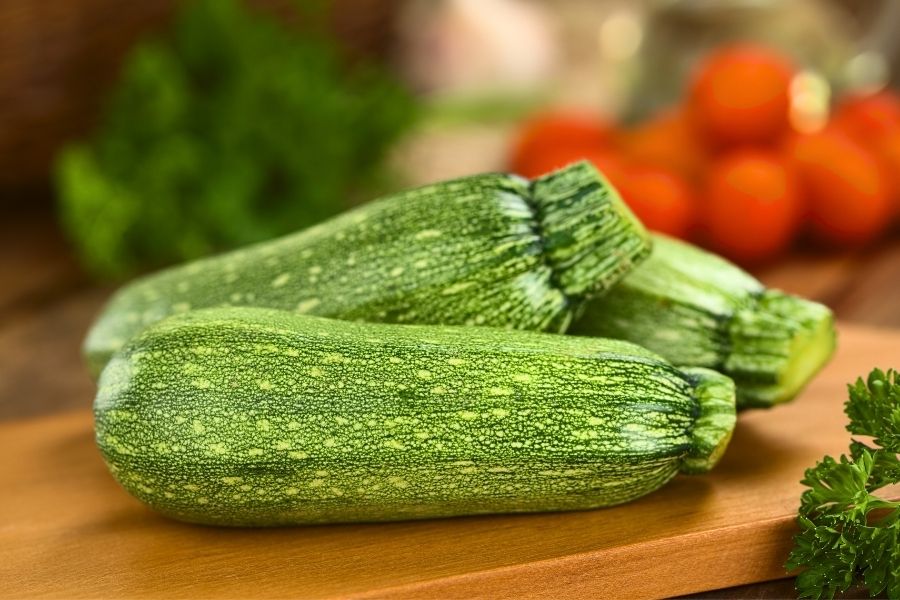 This is because all Cucurbitaceae (including cucumbers and pumpkin and zucchini) contain a bitter compound usually found in the ends and the outer skin. It’s a defense mechanism to deter animals (and humans) from eating them, and in large doses can be very toxic.

You can roast zucchini just as easily as you roast an eggplant. You’ll still get a smoky flavor and similar texture, but it might be much harder to handle as it may be softer.

You can also try tomatoes. You can roast them whole, or get very large ones and cut them into thick slices, and then roast those slices. If you’re making ratatouille, this is probably the best method, because it gives you a nice favor and sets them apart from the onions you’d add anyway.

You can find pre-roasted, canned tomatoes if you don’t feel like roasting them yourself. We recommend the beefsteak tomatoes; the really big, ribbed ones that can feed an entire family.

They tend to have the best flavor, and a whole lot of meat to juice ratio. This makes then absolutely perfect for roasting or slicing very thickly.

You can use any mushroom for this, but we really recommend the oyster variety. This is because they can be cut into long, thin slices or left as thin and wide separate mushrooms, and roasted like that.

Keep in mind that oysters keep a whole lot of water, so when you rinse them you’re adding water. Of course, if Portobello’s all you’ve got, then those will work too.

The point of mushrooms is to emulate the meaty flavor and texture that some eggplants can have. If you’re using breaded eggplant, then subbing for mushrooms will work too.

To get the truest roasted flavor, you may need to go for roasted bell peppers. These are close to the original flavor of eggplant, meaning that roasting them will get you a similar flavor.

It won’t be the same, but it will be different enough to appease those who can’t stand eggplant. Oh, if your reason for not eating eggplant is a nightshade allergy, then tomatoes and bell peppers are off-limits too, as they’re nightshades as well.

But if you’re fine with nightshades, then roast bell peppers can be a wonderful substitute. 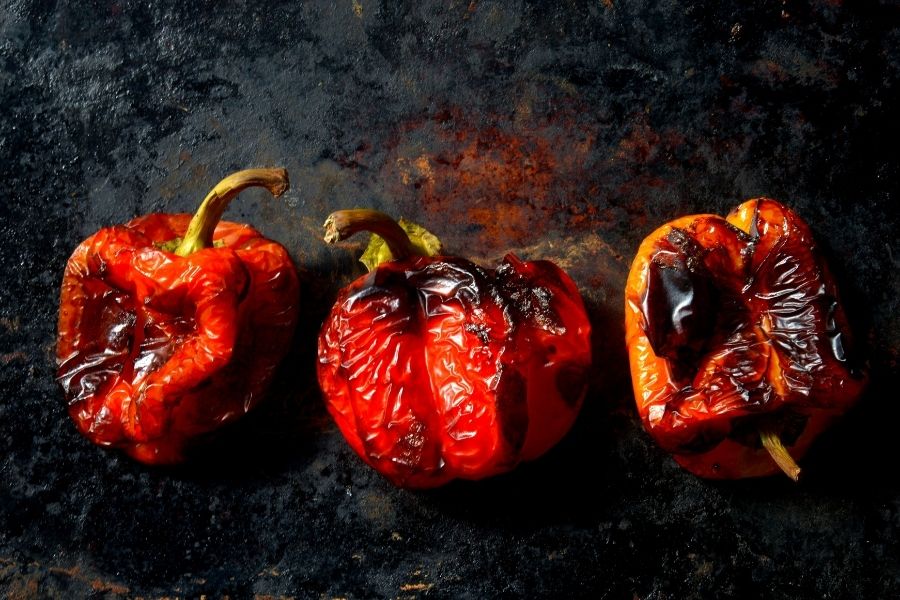 Do give other eggplant varieties a chance

We really recommend you try other eggplant types. If you’re used to the large, dark purple variety, then maybe other types may taste different. For example there’s the graffiti eggplant, a lighter purple one with white stripes.

There’s also Japanese and Chinese eggplants, which are very similar. They’re both long and thin, seedless, and have a very creamy texture when cooked. So if your main issue with eggplant is the texture, maybe these two will help.

There’s also green and white eggplant, but they don’t taste very different from the others. And finally, if you find the small ones, you can roast them and they’ll get tender very quickly.

Why your eggplant is bitter

The main problem with eggplant, for most people, is the bitterness. Some eggplants are just too bitter to cook with, and this can really upset people. We understand, so here’s a few tips on why eggplants can be bitter, and how to avoid it.

If you’re using roast eggplant, then the trick is to salt them after roasting, and let them sit in a colander to drain for several hours. If you split them down the middle to let the juices from inside seep as well, you have less of a chance of bitter eggplants.

Keep in mind that most of the bitterness is concentrated around the seeds, so maybe removing those will help as well.

You didn’t salt the eggplant to remove bitterness

If you’re cooking with sliced eggplant, always remember to set them on a plate that has salt on it, then salt the top as well. Make sure there are no overlapping slices. This draws out extra moisture but also draws out most of the bitterness. Drain them before cooking.

You got a very old eggplant

Other times it’s not you, it’s the eggplant itself. Older eggplants can get bitter, simply because they’ve been in storage for so long. The best eggplant is a fresh eggplant. Use it soon after you’ve bought it, don’t let it linger in the fridge for another week !

Roast eggplants are a little bit bitter to begin with

It may be worth figuring out if your taste buds are extra sensitive, or the eggplant really is that bitter. The thing is, roast eggplant can get a little bitter, due to the roast flavor. It could be that you’re picking up on notes that are naturally a little bitter, and magnifying them.

Some folks are very sensitive to anything bitter, so they notice it right away and can sense it through any seasoning. If you’re part of this group then we’re sorry, but there’s no fixing eggplant.

Unless the veggie is definitely bitter and there’s something wrong with it, it might just be your taste buds.

Read Also: Should Eggplants Be Refrigerated ?

A tip, if you will. If you’re making ratatouille and don’t want to find your eggplant still firm, lightly fry it on high heat before you set it with the other vegetables.

This way it gets a head start and will definitely soften up during cooking. You can also do this with the onions as well, if this is an issue.

And that’s pretty much it, eggplant and all its substitutes were discussed today and we really hope you found at least one food item that’s worth trying. And if you decide to give other eggplant types a try, we hope they turn out creamy and delicious !