Eggplants. Despite the name, they’re not really eggs nor do they look like an egg. More interesting, they’re almost always a beautiful, glossy shade of deep, dark purple. So why are eggplants called eggplants then ?

And why are eggplants purple ? Why are some eggplants white ? Is there any difference between them, or is it just a color thing ? This is what we’ll be looking at today, and hopefully find an answer. 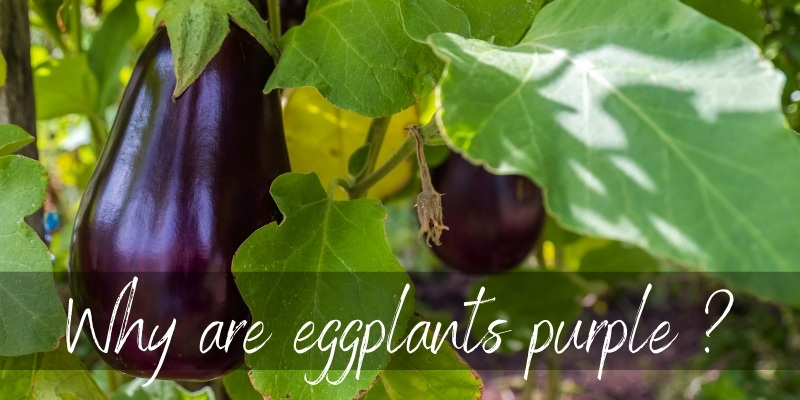 Why are eggplants purple ?

Eggplants are purple because the outer skin produces a pigment called nasunin, which is from the anthocyanin family of pigments. It ranges from white to a deep, dark purple, without going into too much red.

This is why you see eggplants that are a lighter shade of purple, and ones that are nearly black. It’s also why some eggplant cultivars are capable of two colors, like the graffiti eggplant (purple and white stripes).

As the eggplant matures, it develops less chlorophyll and more nasunin (a type of anthocyanin), getting progressively purple, until eventually almost black. Of course, each cultivar is different in its own way and some may be good for harvest even as a lighter shade of purple.

keep in mind that when cooking eggplant, its outer skin is likely to change color. Because of the heat, the pigment may break down and reveal an unpleasant shade of green underneath that purple. It’s fine, there’s nothing wrong with it. But it might be something you notice, especially if the eggplant is simmered.

Why are some eggplants white ?

White eggplants simply produce much less anthocyanin, even in direct sunlight. This means they can and will remain white until they are ready to be picked. An interesting note about white eggplants, if you leave them on the vine for too long they will eventually turn yellow, a sign they are overripe and will soon rot. 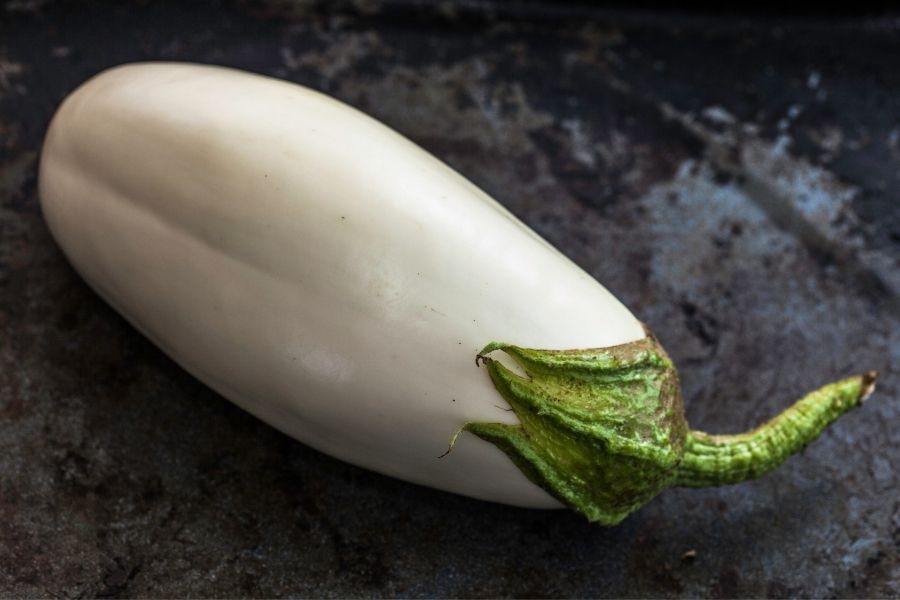 Do eggplants start out white ?

Not all eggplants start out white. Normally an eggplants starts out as a lighter shade of its pre-determined color. So if the cultivar you have is a dark purple cultivar, it will be a relatively dark shade even when it’s first growing, and then get gradually darker. Conversely, a striped cultivar will show clear stripes from the beginning, and they will get more pronounced as the vegetable matures.

All eggplants are harvested when under-ripe, much like bell peppers and sometimes tomatoes. It’s also the reason you won’t really be able to grow your own eggplants at home from store-bought eggplants, because the seeds are immature.

Why is my purple eggplant turning white ?

Normally an eggplant keeps its color after picking. If your eggplant is now turning white, it may be a sign of mold, or water that’s pooled around the vegetable and it’s starting to rot.

Whatever the case, white spots on non-white eggplants are never a good sign. It’s best to toss it and get a fresh one. On the same note, never keep eggplant in the fridge for more than a couple of days. It’s very cold-sensitive and will start to go bad faster.

Read Also: Should Eggplants Be Refrigerated ?

Although it sounds very silly, the reason eggplants are called eggplants is because of the white cultivar. It grows almost as large as a purple eggplant, but when it’s still young it looks exactly like a chicken’s egg. It was also called garden egg at some point, and the ‘eggplant’ was coined in English, it wasn’t translated from another language.

Aubergine on the other hand has a long and complex history. It’s derived from the Arabic bāḏinjān, which itself is derived from ancient Indian dialects. As travel, trade, warfare, and general human history brought different cultures together, aubergine came to be the standard European word for eggplant.

You’ll notice that it’s mostly America and Australia that use eggplant as a word, while the British often use aubergine, due to European influences (namely French).

No matter where you’re from and what language you speak, the vegetable itself is the same, and it’s used in mostly the same way. We recommend trying baba ganoush (roast eggplant paste) at least once !