Vanilla has long been used in all kinds of sweets and perfumes, to the point where it’s now everywhere. It’s both one of the most expensive spices in the world, and one of the most common flavors you will ever find. Even the unofficial word for ‘bland, plain, simple’ is ‘vanilla’. Why ? Because it’s become the most basic of all flavors.

So when and how did vanilla shift form so expensive and rich to something cheap and common ? When artificial vanillin came along. What’s the difference between true vanilla and artificial vanillin ? Can you tell the two apart ? Do any products actually contain vanilla, or are they just vanillin ? All this and more, coming right up ! 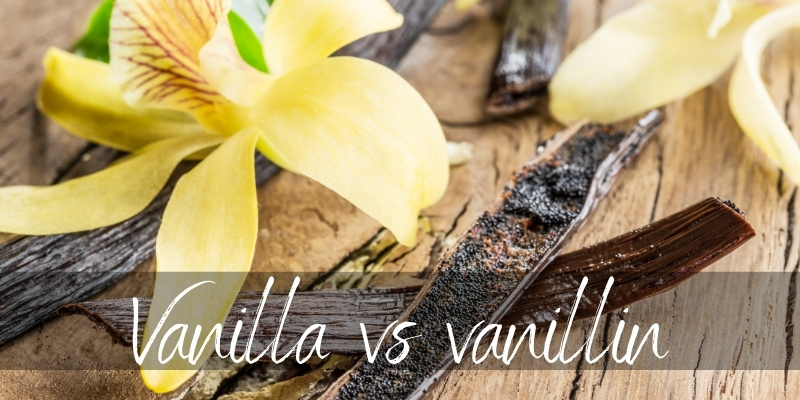 Table Of Content show
1 True vanilla vs vanillin
1.1 True vanilla has a more complex flavor
1.2 Artificial vanillin is cheap, easy to find
1.3 Can you tell the difference between vanilla and vanillin ?
2 Why are vanilla products white ?
2.1 What are the little black specks in vanilla ?

Vanilla is an expensive spice that does, in fact, contain vanillin as its main compound. Vanillin makes up about 2.5% of a cured vanilla pod’s weight, and is only one of the compounds found in vanilla. Modern-day vanilla flavor comes 99% from artificial vanillin, as it’s cheaper and faster to produce.

True vanilla extract is very expensive and comes in small bottles. It’s very potent and may only be found in gourmet shops. Almost everything you see on supermarket shelves is artificial vanillin extracts. Let us explain why that is, and why it’s not such a bad thing.

The vanilla pod contains several compounds, and they need months of curing to fully develop. Just like cocoa beans, vanilla pods need to be processed and cured before they can be used in any way. This takes up to 9 whole months, from the moment the pod is harvested. It’s one of the reasons true vanilla is so amazingly expensive.

Aside from vanillin, vanilla flavor is also made up of 170 other compounds, including:

But you’ve likely never tasted real vanilla, and neither have we, or most of the world. Getting real vanilla is difficult, and frankly the subtlety is lost during baking. True vanilla stands out better in a perfume, or in some way you don’t lose the other compounds.

Since true vanilla is so complex but incredibly expensive, vanillin has come to the rescue. It’s in 99% of all vanilla extracts you can get your hands on, and it’s very easy to make and thus cheap.

Which is kind of why vanilla has become the default, non-descript, inoffensive flavor. It turned from something rare and delicious to something easy to imitate and it lost its subtlety along the way.

This is good in a way, because vanilla (or rather vanillin) is used as a backdrop for almost every other flavor. Vanillin is easy to come by, since it’s derived from wood, plain ol wood. You know how old books with yellowed pages just smell sweet ? That’s it, right there.

Can you tell the difference between vanilla and vanillin ?

There is a difference in flavor between plain vanillin and true vanilla, but the subtleties and notes are often lost during cooking. This means that all the other ingredients used in cooking can overshadow the other compounds in vanilla.

So, if you do have true vanilla extract try and make the simplest cookies or cake you can possibly make. Use as few ingredients as you can, to let the vanilla stand out.

Why are vanilla products white ?

Vanilla products end up white because vanilla extract does not have a strong color, and only small amounts of it are used. This gives only a faint tint, in the best of cases. And when vanilla products are made, they usually contain a form of daisy, and/or flour, which are both white. The result is an off-white food item that tastes like vanilla.

For example vanilla ice cream, the most basic of foods, is made from dairy and eggs, and vanilla extract. Vanilla extract is dark brown with a reddish hue, but you only add a little at a time. Even if you added more, it wouldn’t be enough to turn the ice cream brown. At most it would be a light beige color, but by them it would be difficult to eat since it’d be too flavorful. 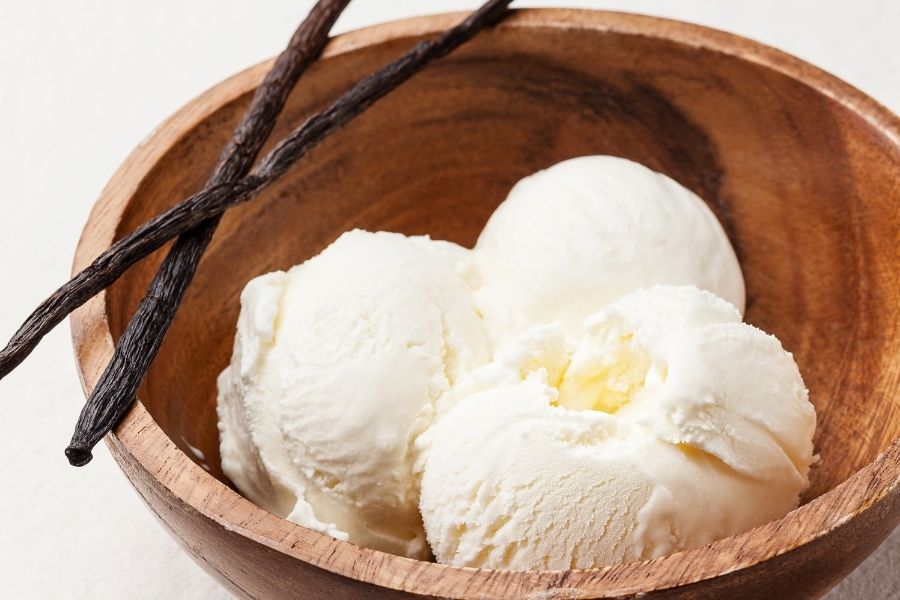 Vanilla cake is a light yellow or cream color because of the egg yolks used in the cake, the butter, and the white flour. The vanilla extract does not change the color, since it has no power compared to the other ingredients.

What are the little black specks in vanilla ?

Normally, in the true vanilla extract, you may find these if the pods are cut before being extracted. And you may also find these seeds if the product was made with a real vanilla pod, that was cut, and had the seeds scraped into the food.