Rhubarb, everyone’s favorite fruit-vegetable ! You can find it in pie, smoothies, desserts, and sometimes even savory dishes in the beginning of summer.

It’s usually paired with strawberry, so they tend to be on the shelves in the same season. But when should you stop eating rhubarb ? You may have heard something about rhubarb turning toxic after a certain period.

Well this is what we’ll be exploring today. When is rhubarb safe to eat, when should you stop eating it, and how to tell when it’s bad. 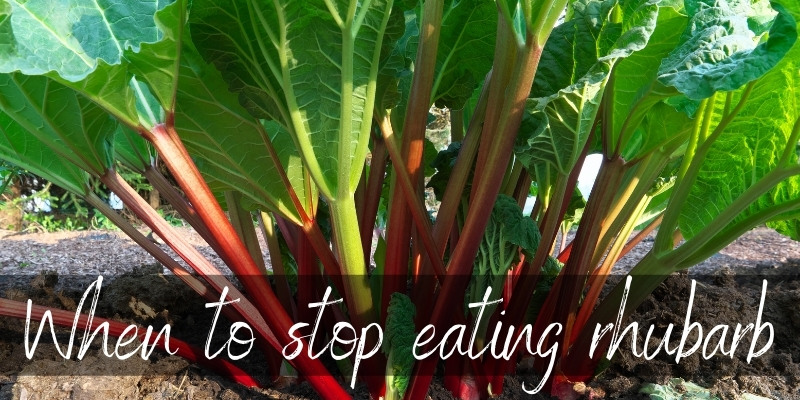 Table Of Content show
1 When not to eat rhubarb
2 When is rhubarb too old to use?
3 Rhubarb season is late spring-mid summer
4 Rhubarb leaves are poisonous
4.1 Is frozen rhubarb toxic ?
5 How to tell if rhubarb is bad

When not to eat rhubarb

Rhubarb is best eaten before the middle of summer, so before the end of July. This is because the stalks become very fibrous and start to lose their flavor.

Rhubarb doesn’t become poisonous after the middle of summer, only the leaves are poisonous. Still, you need to let the plant grow in peace, so it can replenish in the spring.

All of these are the main reasons why you shouldn’t eat rhubarb after mid-July. Less flavor, overly woody stalks, and the plant needs to replenish to grow.

Now let’s talk a bit about when rhubarb is in season, and what you need to know about those dangerous leaves.

When is rhubarb too old to use?

We know now that rhubarb gets out of season after the middle of the summer and the leaves become poisonous but what are the signs that the rhubarb is actually old.

A young fresh rhubarb will have a crisp and firm stalk, a uniform color, and a fresh a bit sweet smell. If you notice that there are any weird brown spots, the appearance of mold, mushiness, or a weird smell those are clear signs that the rhubarb is old and overripe so you should discard it.

We will get into more details later in this article on how to know if the rhubarb has gone bad.

Because of the way it grows, rhubarb is great for harvest in the latter part of spring. Most of the rhubarb grown and sold in America is from Oregon and Washington, in open-air fields.

This means you can reasonably expect rhubarb between May and early July. That is the general harvesting season. But there are hothouse crops too.

Rhubarb grown in hothouses (not regular greenhouses, these are heated throughout the year) comes in early spring. These will overlap with the open-air fields, resulting in a rhubarb season from late March to mid-July.

So if you were hankering for some rhubarb pie, you’ve got a few solid months to try it out. Now let’s talk about the leaves for a bit, because they’re definitely something to watch out for.

Rhubarb leaves contain oxalic acid, which is toxic if ingested. This is the plant’s primary method of defense. It can be fatal to animals, so please make sure none of your pets or livestock go near those leaves. Humans have to eat a lot of leaves to have severe symptoms, but it’s best to avoid them. 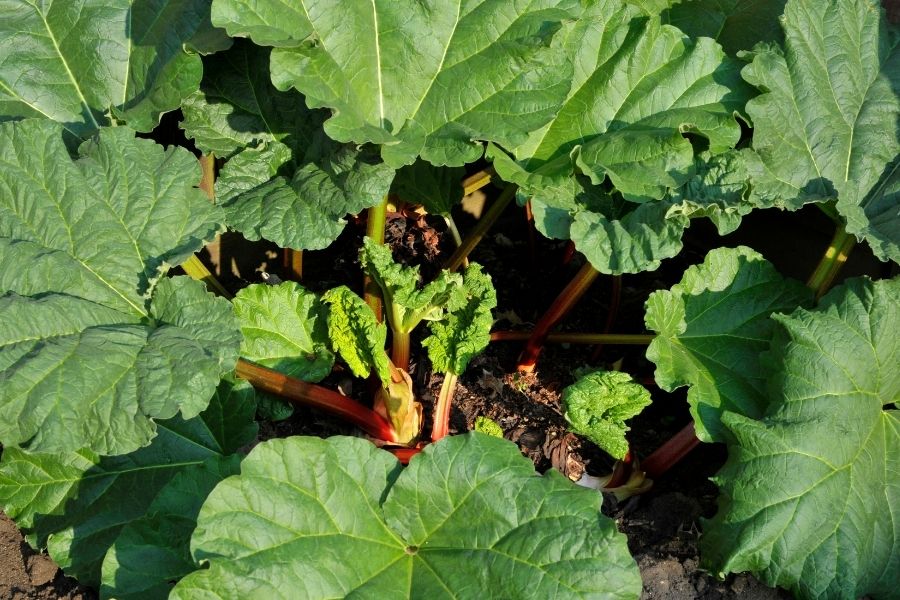 The poison is only in the leaves, which is why you always have to cut them right off the stem when cooking. Most of the time rhubarb is sold without the leaves, but it’s best to check.

There’s an old saying that you shouldn’t eat rhubarb after the middle of summer. It overlaps with two factors:

The first part is true, rhubarb does become fibrous and loses its tart flavor towards the end of summer. It can still be harvested and eaten, but with bland results.

The second part about the poison migrating isn’t based in science, and there’s no evidence that oxalic acid seeps into the stalks. However, there is one thing to look out for.

As summer moves along and autumn creeps up, the first cold snap will being a little frost. Rhubarb that’s experienced frost isn’t going to be any good. The stalks will turn limp, the leaves will wilt.

If this happens, there is no point in eating those stalks, as they’re no good. It could be the basis behind the don’t-eat-after-midsummer warning.

Let’s differentiate between frozen rhubarb, and rhubarb that’s been touched by frost.

Frozen rhubarb is the one that’s picked in spring-early summer, chopped, and flash-frozen. It’s just the stalks, without the leaves, as healthy and crispy as you can find them in their season.

You find frozen rhubarb in the frozen foods section in supermarkets. You can also make your own frozen rhubarb. As long as you’ve got a lot of healthy, fresh rhubarb stalks, you can chop them up, put them in a freezer-safe bag, and keep them for up to 6 months.

Rhubarb that’s been touched by frost is unharvested rhubarb, the one that’s still in the ground. And once that rhubarb gets its first frost (mid-fall) the stalks will go limp, as will the leaves. There is no point in eating that rhubarb. The flavor is minimal and the texture is too fibrous. 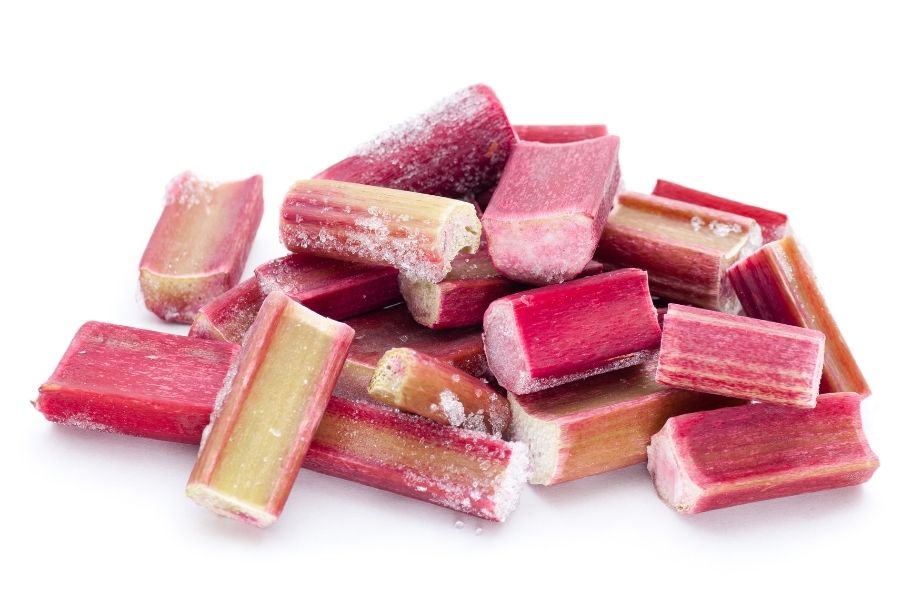 Even so, oxalic acid hasn’t been proven to migrate from the leaves and into the stems one the cold season approaches. So if you were wondering if frozen, pre-packaged rhubarb is safe to eta or sue in pies, it is.

Read Also:Why Is Rhubarb So Expensive ?

How to tell if rhubarb is bad

As any other vegetable or fruit in this world, rhubarb can and will go bad. Whether it’s rotting or it’s just not that good anymore depends on a few signs. We’ll describe them here, and you should be very careful when buying rhubarb so it doesn’t already display some of these signs.

Mold at the ends of the stalks, especially the lower ends. Mold will grow naturally on any surface, as the spores are in the air around us all the time. If you see mold on your rhubarb, you have two options. You can either throw out the entire thing, or cut off the moldy part and sue the rest.

Mushy, soft stalks are another sign your rhubarb isn’t that good anymore. Normally rhubarb stalks are like celery stalks. Stiff, fibrous, and watery. If you try to snap them, they offer a lot of resistance. Soft stalks are not a good sign, and should be thrown right away.

An obvious smell, especially if it’s a sour smell. This is a sign the rhubarb is beyond saving, and should be discarded. Rhubarb doesn’t smell strongly, not even when it’s fresh. It may smell a little ‘green’ and herb-like but it shouldn’t smell bad.

If you’re picking out rhubarb at the grocery store, make sure the stalks are thick and glossy looking. They should be stiff to the touch, and not bend too much. Color isn’t really that important.

Traditionally rhubarb is meant to have a red stalk, at least that’s what everyone knows. In truth, rhubarb stalks can be anything from light green to deep crimson. It’s usually the hothouse rhubarb that has the most crimson stalks.

That being said, if your rhubarb has only a bit of red and the rest is green, it’s still good. The flavor isn’t that closely tied to color.