Aaaaah cakes ! Aaah cupcakes ! If you were to choose to only have one for the rest of your life, which would you have ? That sounds like the toughest question anyone can ask, aside from chocolate or vanilla. Really cakes and cupcakes are both so good they’re difficult to choose between. Especially if you’re thinking of the best way to serve something sweet for an event.

Cakes are better suited for some event types, while cupcakes are better for others. Both have their pros and cons, and it’s hard to choose just one option. So let’s compare the two and you can see which would suit you best. 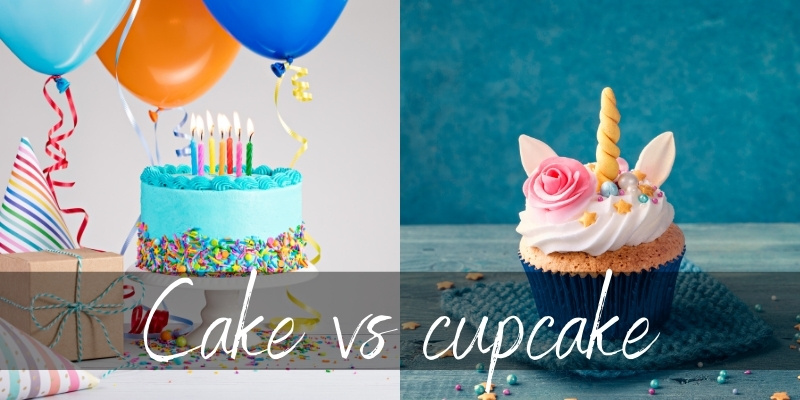 Table Of Content show
1 Cakes vs cupcakes
1.1 1. Cupcakes allow better portion control
1.2 2. Cakes are more formal, cupcakes are more relaxed
1.3 3. Cupcakes are easier to share and take home
1.4 4. Cakes allow more room for complex, lavish decorations
1.5 5. Cupcakes allow more variety, no flavor commitment
1.6 6. Cakes take longer to cook through, as they’re larger
1.7 7. Cupcakes require a specific tray and liners
2 You can make nearly any cake into a cupcake
2.1 Can’t I just cut a big cake in squares ?
3 Is a cupcake the same as a fairy cake ?

Cakes are larger, and usually more ornate than cupcakes. Cupcakes bring better portion control and more versatility in terms of flavors, while cakes are limited to 1-2 flavors per cake.

Both can feed many people, but cakes are more suited for a formal setting, while cakes are better for a more informal, laid-back one.

You may want to consider the cooking time, along with prepping the sweets. A tray of cupcakes bakes in half the time a cake would, simply because they’re smaller. And so on. Whichever option your end up using will depends a lot on these factors, along a couple more.

Next we’ll discuss how cupcakes and cakes fare in terms of portion control, formality and expectations, ease of sharing, decoration options, variety, cook time, and utensils.

Since cupcakes are basically stand-along cakes, each person can have their very own cupcake. This is especially useful if you want to limit the sweets at the event, or if you have a lot of children and want to leave some room for food. 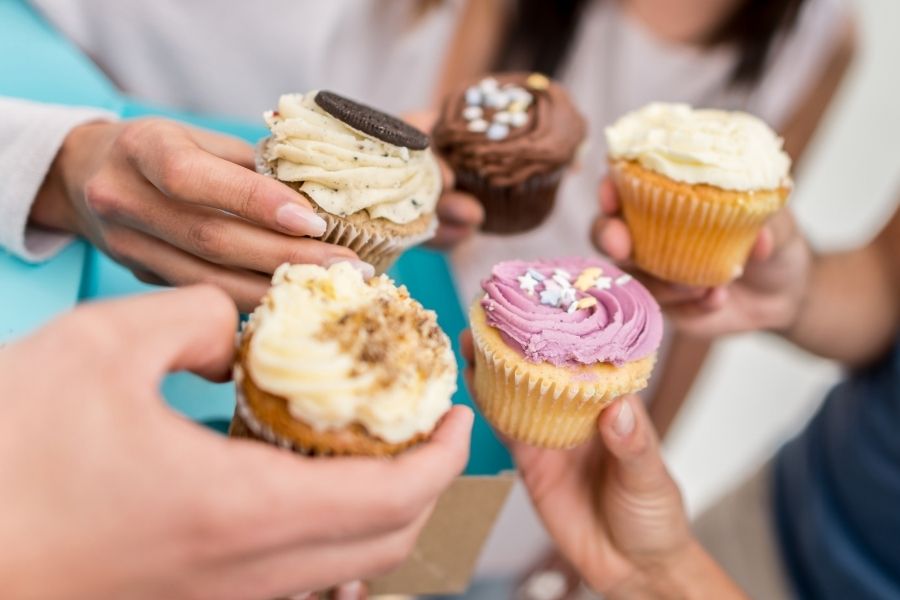 There are mini, standard, and jumbo cupcakes and you can find trays and liners for all three sizes. A better control over who gets how much also results in no unnecessary leftovers. You can always set a number of cupcakes per person, and then bake a dozen extra just in case.

Read also: Why Are Cupcakes So Popular ?

Cakes on the other hand are very flexible in how big or small the portion is. Most people cut big slices and often can’t finish eating all of it. And there a limit to how thin the cake slice can be before it topples over and falls apart.

So you can get 10 or 18 portions from the exact same cake, depending on how you cut it. Some may consider this a bonus, some may find it stressful to try and guess how many cakes they need for 80 people. Cupcakes offer a simpler way.

If your even is more formal, like a wedding, baptism, birthday party, or so on, you’re likely going to opt for a cake. The main reason is that, no matter how large the guest list is, a cake is simply expected in these situations.

As cupcakes are more relaxed, they’re seen as something to tide guests over until the real thing arrives: the cake. So, you may want to opt for a large cake or a tier cake. If it’s a formal event it’s likely you’ve got a contract with a bakery or caterer and they can figure out how much cake you need if you tell them how many guests there are.

On the other hand cupcakes are better for more informal gatherings, or even spontaneous ones. For example a bridal shower, or a holiday where the main event is a savory dish, like Thanksgiving or Christmas.

Of course you can get cupcakes for formal events and this will set a more casual, fun tone to the party. It’s up to you and what you want the overall theme and atmosphere to be.

As cupcakes are single serve, and each of them has a liner, they’re easier to pass from hand to hand, and even eat on the go. This means they make great party favors, or if you want something sweet while you’re doing all sorts of things around the house.

Cakes need the plates and forks and napkins to be out, and you almost always end up sitting at a table. Besides, cake slices are great but they simply don’t look as good in a plastic box to take home.

As cakes are larger, they allow you to be more detailed and complex in your decoration theme. This means beautiful artworks can be created on cakes, with intricate icing and gum paste flowers, gold paint, and so on. Many cakes can even be shaped into different sizes, like a heart or star or you can get your child’s favorite cartoon on there. 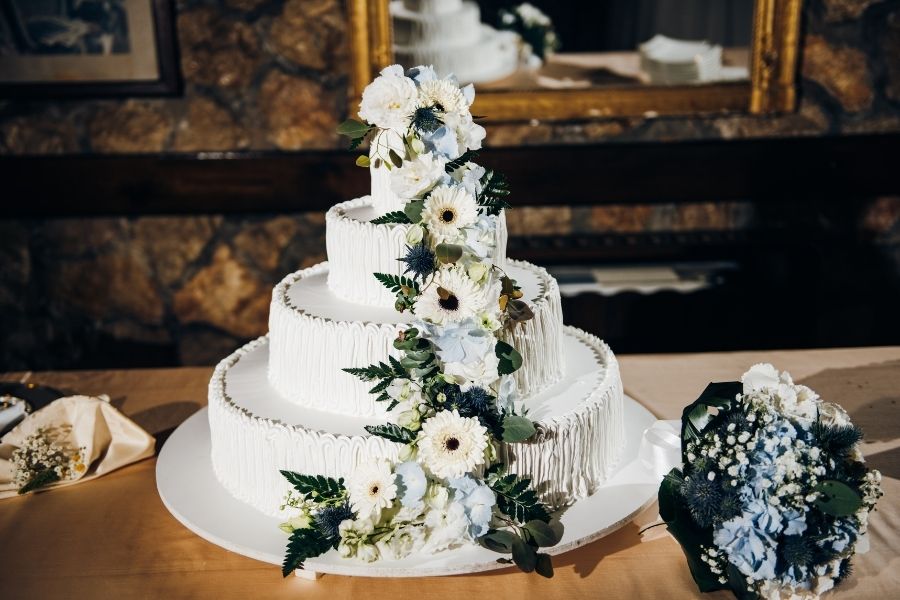 In the case of weddings, or any cake that needs to be impressive, you have room for all the embellishments you may want to add. A cake is usually impressive, wedding or not.

Cupcakes may challenge your creativity more, since they require you to think outside the bow. For example if you can get Elsa onto a cake, getting her onto a cupcake is difficult. But you can take the overarching theme, like colors and symbols and maybe a few key words will get the same job done.

As cupcakes are smaller, they can easily be made into different flavors. For example a plain vanilla cupcake can have a strawberry frosting, a salted caramel one, a lavender one, and a coconut frosting. All you need to change is the filling (if any) and the frosting, but the cake part remains the same.

A cake can only have so many flavors before it gets overwhelming. Most have 2 flavors, with 3 being the maximum. For example in a birthday cake you’ve got vanilla and the fruity bubblegum sprinkles. Two flavors.

In triple chocolate cake you’ve got white, milk, and dark chocolate. Doable, but only because they’ve got the same base, which is chocolate.

But if you were to get a cake with vanilla layers, a chocolate filing, lemon buttercream, coconut cream, and peanut brittle you’d get too many flavors. Tp the point where it would be difficult to discern exactly what you’re eating.

So, if you wat to serve a whole lot of flavors (or more than 2) for your event, go for cupcakes.

6. Cakes take longer to cook through, as they’re larger

Since cakes are large, much larger than a cupcake, they take longer to bake. First because there is more batter, and second because they need a slightly lower temperature to bake. If you put them in the oven on high, the outsides and the top would burn by the time the inside would cook through.

Cupcakes are smaller, so more of their surface is exposed to the hot air. This means that a standard tray of cupcakes can bake in 15-20 minutes at 180 C/356 F, while a standard 9″ cake will take 35-40 minutes at the same temperature.

Cakes are also very likely to dome, unless you use cake liners or bake them in a water bath to keep the sides from heating too much.

If you’re making the sweets yourself, then you’re limited by the tools you have. So if all you’ve got is a cake tin ad no time or way to get cupcake tins, then you’re baking a cake.

If you’ve got both, then you can easily choose which you make. But not everyone has both, and cupcakes need paper liners as well.

You can make nearly any cake into a cupcake

The upside to all of this decision-making nightmare is that nearly all cake recipes can be used to make cupcakes without altering the recipe. Conversely you can use a cupcake recipe and turn that into a cake.

The only downside to doing this is that you won’t be sure how many cupcakes will result from that particular cake recipe, and vice versa. Always remember to fill cake and cupcake tins only halfway. The batter will rise and spill over if you don’t.

Can’t I just cut a big cake in squares ?

The big, rectangular cake cut into squares is called petit four, and it’s different from a regular cake. It’s built in such a way that each and every piece is a sort of stand-along cake, and it’s very different from a cupcake. It’s more informal and you almost always see the different layers of cake and frosting.

Of course you ca get them in individually decorated portions. This means more frosting, which we’ve never heard anyone complain about. And this brings them even closer to the idea of a cupcake .

Read also: Should Cupcakes Be Cold Before Icing ?

Is a cupcake the same as a fairy cake ?

In some English languages fairy cake is the same as the American cupcake, while in some it means a cupcake that is filled, with the top part cut off and the in two, and stuck in the filling like little wings. This was usually done to make more room for filling, and to fix domed cupcakes.

And that’s it ! Hopefully now you know which to choose for your particular event. We’ve grown up with cake at most formal gatherings, including birthdays, or places where there was a specific celebratory moment in the day. Still, cupcakes are a small reminder of those celebrations and we’re love them as well.