Cupcakes and muffins are probably the first things to draw your attention in a bakery, with maybe donuts close behind. And what’s so perplexing is how similar yet different muffins and pancakes seem to be. So much so that no one’s really in agreement if they’re different foods, or just slightly different versions of the same thing.

Well today we’re going to take a look at muffins and cupcakes, and see if they’re really the same thing or not. 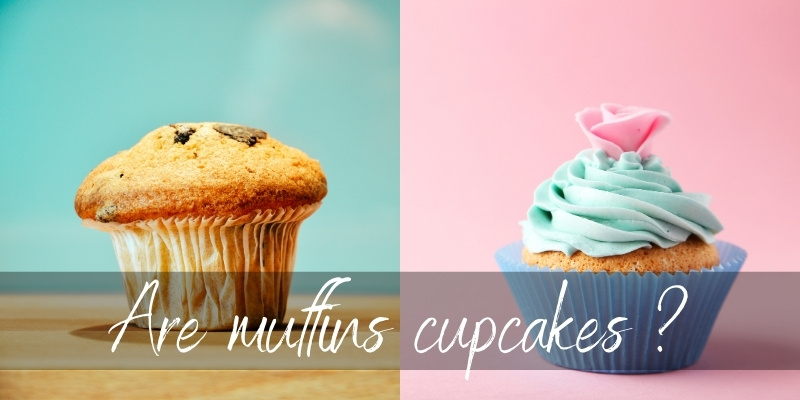 Table Of Content show
1 Are cupcakes and muffins the same ?
1.1 1. Cupcake batter is lighter, has a finer crumb
1.2 2. Muffins usually have chunky ingredients in the batter
1.3 3. Cupcakes are always decorated, muffins not so much
1.4 4. Muffins are less sweet, may be savory in some cases
1.5 5. Cupcakes and muffin batters are mixed differently
1.6 6. Muffins are encouraged to form an overflowing top
2 Can you frost a muffin and call it a cupcake ?
3 Are muffin pans different from cupcake pans ?
4 In the end they have roughly the same ingredients

Are cupcakes and muffins the same ?

No, muffins are different from cupcakes because of the way they’re prepared, their overall texture, and their decorations. Muffins generally have a coarser crumb and have different ingredients as fillings. Cupcakes are smoother, like a cake, and use liberal amounts of frosting as both a filling and frosting.

There is also the shape of these two sweets to consider. The muffin is usually larger, taller than a plain cupcake. It also has a vaguely mushroom-like shape, creating a muffin top. Cupcakes are usually wider than they are tall, to accommodate all the frosting on top.

Of course there are more differences than this, and they need to be discussed in detail. By the end of this post you may or may not agree with us that muffins ad cupcakes are not the same. The line between them is very fine and they have considerable overlap. Let’s take a closer look.

1. Cupcake batter is lighter, has a finer crumb

When you bite into a cupcake, you notice how fine and fairly smooth it is. Small, moist crumbs and a whole lot of frosting. They also taste very rich and are rarely dry, simply because they have all that butter in. 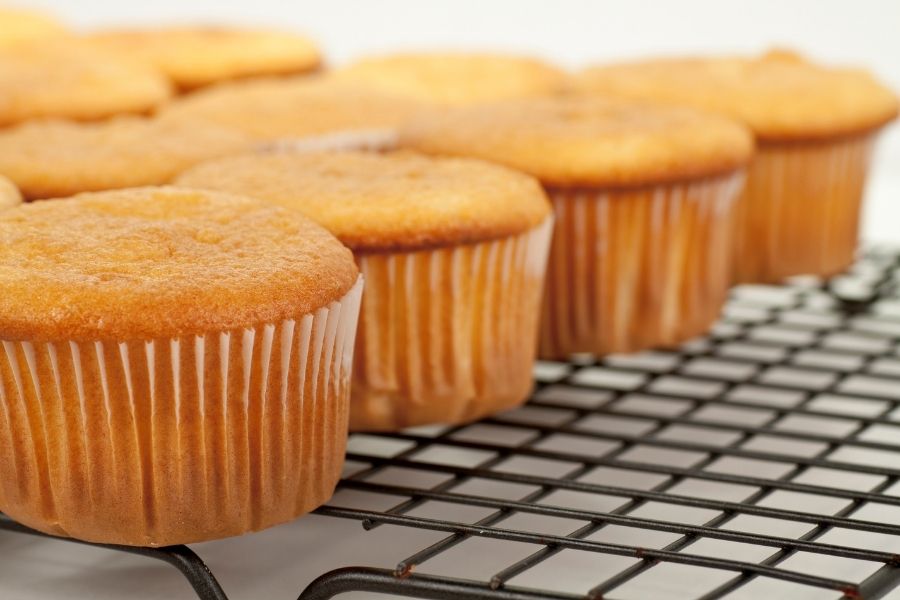 Muffins have a coarser crumb, as they’re mixed differently and may often have lumps. When you mix muffin batter, you stop just as all the ingredients are incorporates. This creates a looser, fluffier crumb and texture. Gluten isn’t developed that much.

Read also: Why Are My Cupcakes Sticky On Top ?

When you mix cupcake batter, you mix it longer, creating a tighter, smoother texture.

The crumbs and texture are also derived from the type of flour you use. Cupcakes are almost always made with plain, fine flour. This is what helps the batter be very smooth and have fine crumbs. Whereas muffins may be made with coarser flour, such as cornmeal, whole wheat, oat flour, and so on. This makes bigger, coarser crumbs.

2. Muffins usually have chunky ingredients in the batter

You can have both muffins and cupcakes with large ingredients in the batter, but that’s usually the case with muffins. This is because chunky ingredients like whole blueberries or chocolate chips do not rise the batter evenly, and may even produce less cooked pockets. With a coarser flour this is not an issue.

But with cupcakes, which use fine flour and must rise evenly, this can easily turn into a problem. Put simply, cupcake batter is too delicate for coarse ingredients, so it’s almost always plain.

Over time muffins have come to be known and recognized by their ‘something something’ filling. You have blueberry muffins, chocolate chip muffins, coconut flake muffins, and so on. The cupcakes get their flavor mostly from the frosting, not the batter itself. 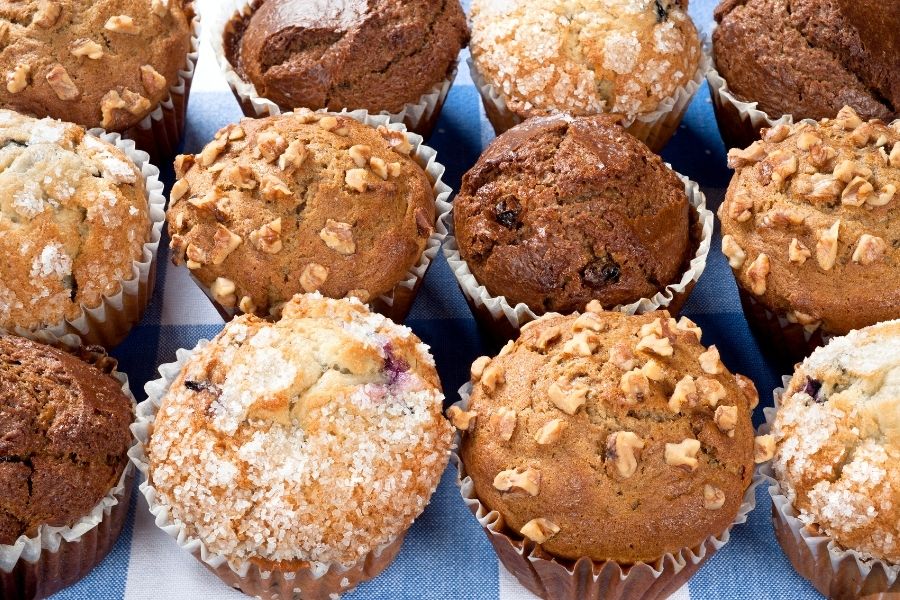 3. Cupcakes are always decorated, muffins not so much

As cupcakes need something else to give them that extra flavor, they’re always decorated in some way. Be it buttercream, ganache, whipped cream, chocolate glaze, you name it, it’s got it. The cake part is always plain, a mild single flavor like vanilla or chocolate. It’s the frosting that gives cupcakes their appeal. Much like cake !

Muffins rely on their filling for flavor and texture, so they’re usually not decorated. Or if they are it’s a very simple one like icing sugar, chopped nuts, streusel, granulated brown sugar, or nothing at all.

4. Muffins are less sweet, may be savory in some cases

Because muffins rely on their flavorful ingredients more, they don’t end up as sweet as a cupcake. Oh they’re sweet alright, they’re just less sweet than a cupcake.

Cupcakes get most of their flavor but also their sweetness from the frosting. And that frosting is almost always buttercream, which is simply butter that’s been creamed with sugar. This results in a very sweet frosting that stands out, compared to muffins.

There’s also that high frosting to cake ratio on cupcakes. Cupcakes usually have frosting piled high and are delicious because of that. But it also means they end up sweeter than anything else.

The way muffins batter and cupcake batter are mixed is very different. Nevermind the long vs short mix time, it’s the order of the ingredients that matters here.

Muffins usually have all their wet and dry ingredients mixed separately. Meaning eggs and sugar and butter are beaten in one bowl (sometimes the egg whites separately), while flour and baking soda are in another bowl.

When it’s time to incorporate them both, the mixing is minimal. There is overall less butter and less egg in a muffin batter, compared to cupcakes. So you need to stir more, to make sure all the flour is incorporated. But mixing too much activates the gluten, so there’s a delicate line you don’t have to cross.

Meanwhile cupcakes usually have all their ingredients mixed in the same bowl, via different methods like creaming or chiffon cake.

6. Muffins are encouraged to form an overflowing top

When you fill a cupcake liner, you stop halfway. The cupcake will rise and barely touch the top part of the liners. That’s the ideal way to make them, so they can have enough room for frosting. This also means they have less chance of doming, which will make frosting slide right off.

Muffins have no frosting, so it’s fine if they rise. In fact, muffin liners are filled more than cupcake liners. This is to encourage the muffins to spill over and create that cute muffin top shape we all know. This also results in a severe dome, which is considered desirable in muffins.

Can you frost a muffin and call it a cupcake ?

No, you can’t frost a muffin and call it a cupcake, since it has a very different crumb and texture. This doesn’t mean you can’t add frosting to a muffin, but it does not turn into a cupcake just because of cream.

As discussed before, the muffin method of mixing and its ingredients yield a different type of quickbread than cupcakes.

No, the type of pan you need to muffins and cupcakes is the same. There are different sizes, but they can work for both cupcakes and muffins. The difference in shape between cupcakes and muffins is due to how the batter was mixed, how much batter is added to the liner, and the resulting dome or lack thereof.

Read Also: Why Are My Pancakes Dry ?

In the end they have roughly the same ingredients

It’s true that in the end, the difference between muffins and cupcakes is not that big. When you compare them to something drastically different like bread or donuts, they seem very similar.

Only when you compare the two do any actual differences surface, aside from frosting. So in short, we stand by what we said. Muffins are cupcakes are not the same, as they’re made very differently and end up as very different bakery products.