Whether you’re a beginner cook or a seasoned chef, you’ve got it in your head that onions are love, onions are life. There is basically no recipe without onions. But why ? Why are onions so popular, when so many complain of that ‘oniony smell’ ?

Has anyone stopped to think why we use onions so much in our cooking ? They are the centerpiece of pretty much any cuisine around the world. No matter where you’re from you most probably have to chop an onion before anything else.

So let’s see why onions are so popular, why they came to be so common around the world, and even take a look at a few milder substitutes. 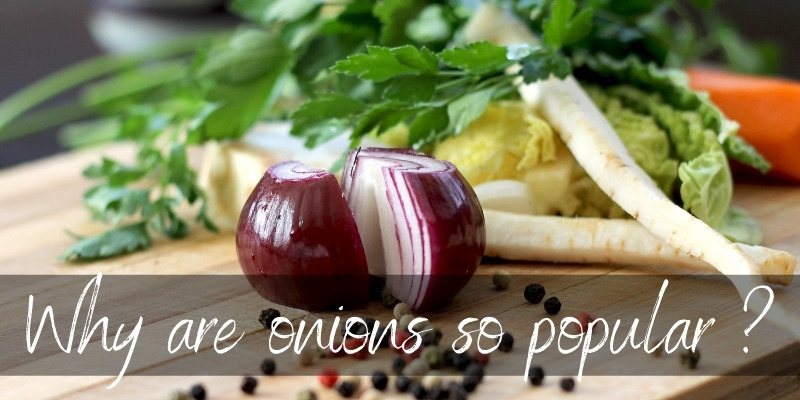 Table Of Content show
1 Why are onions so popular ?
1.1 The onion smell is mostly sulfur
2 Onions grow easily and in most climates
2.1 It’s not clear where onions are from
2.2 Onions are very easy to store
3 Why do we fry onions as a base for so many recipes ?
3.1 Caramelized onions get a sweet taste
4 Onions substitutes to try
4.1 Shallots
4.2 Green onions
4.3 Leeks

Why are onions so popular ?

Onions have been used in cooking for thousands of years, with records going as far back as 5000 BC. They are an easy growing crop, store very well, grow abundantly, are cheap, and provide a lot of flavor to any dish.

In fact, onions are better as a secondary vegetable, like the canvas on which other vegetables and meat can showcase their flavors. Think about the common onion-carrot-celery base so many dishes use.

A dish without onions would be very sad, and a little flavorless. That being said, it’s not the onion itself, but any of the Allium genus. So any garlic, leek, shallot, chive out there can stand in for onions and be the base for a meal.

The onion smell is mostly sulfur

This also means that most dishes using onion will smell similar, or at least have a common thread. The oniony smell folks get a whiff of is actually sulfur, but not quite like boiled eggs. When onions are cooked they release their pungency, and the more you cook them the stronger the smell.

There are ways to remove the onion smell, like placing a bowl of coffee grounds, or burning a few coffee beans in a pan. It’s the carbon in the coffee that absorbs the pungent onion smell, but only for so long.

If the smell is the biggest concern, always cook with a wide open window and keep the kitchen door closed. If your kitchen is connected to the living room, all you can so is close off the other doors in the house and air out the living room, as best you can.

Onions grow easily and in most climates

Okay so onions provide a lot of flavor and are used in many cuisines. But are they commonly used because they’re so abundant, or are they abundant because we’ve planted them everywhere ? 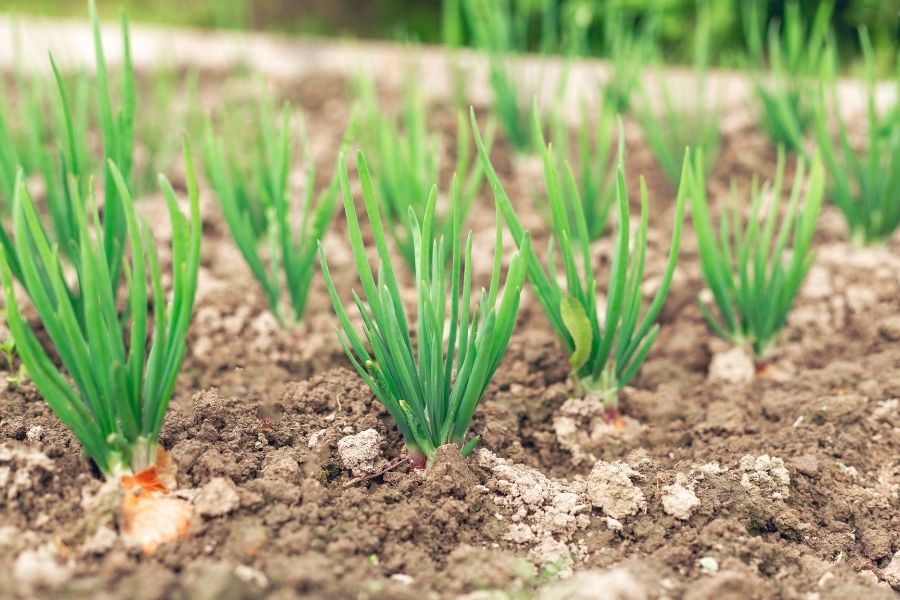 Well that’s a chicken-or-the-egg kinda question and we honestly have no idea if anyone’s ever documented an official answer to this. We’ll go out on a limb here and guess that it’s both.

Onions grow very easily, in all types of soil, and in nearly all temperature zones, and ever survive in very cold climates too. So they’re kind of like the perfect vegetable. Whether humans simply love the taste of cooked onions, or we’ve evolved to love it because we used it continuously, because it’s the primary vegetable, no one really knows.

We just know it’s everywhere, and food would be very different without it. Even if you can’t pinpoint the exact flavor of onion in a dish, you definitely notice it when it’s gone. It’s that homecooked taste and feel, and nothing can really replace it.

It’s not clear where onions are from

The exact origin of onions is unclear. The oldest recorded onion use is in ancient China back in 5000 BC, but the wild onion is extinct. All we know of is the cultivated, domestic onion.

Due to records of dishes from ancient Egypt, Persia, and India, along with China, most historians assume onions were most probably first domesticated in the region between East Asia and the Arabian Peninsula.

Since then onions have been brought to all the continents through trade and/or conquest.

Onions are very easy to store

Aside from onions being so darn easy to grow in terms of soil and how much they yield, compared to how many you need for each meal, onions also store very well. 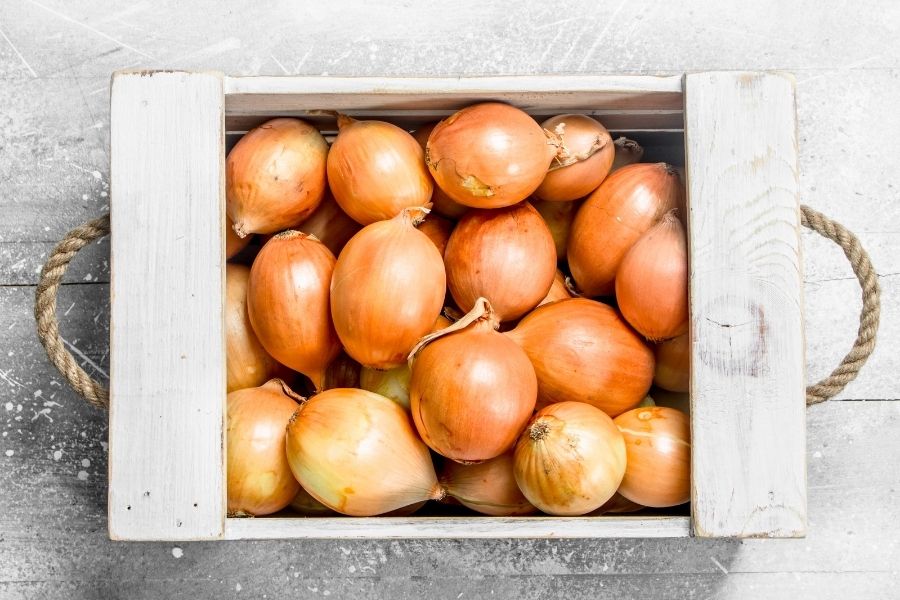 As long as your onions are kept at room temperature, in a well ventilated room, it’s cool, it’s dark, and not very moist, they will keep for up to a month before starting to soften.

If you want to keep the onions in the fridge, you risk getting them frostbitten. They will cook just as well, but their texture will be much softer.

Why do we fry onions as a base for so many recipes ?

When onions are cooked they provide much more flavor, and it’s less pungent than when they’re raw. Whether it’s fried onions, sauteed, or straight up caramelized onions, they provide depth of flavor to any dish.

That, combined with the fact that most flavors are better drawn out through a bit of heated fat, means that nearly everything has to be lightly fried before cooking.

Even if the main cooking method is boiling, like for a soup, lightly frying the onions, celery and carrots beforehand will give it more flavor. If you were to try and simply add raw onions to a soup, the texture would be off and the flavor would be too pronounced.

A cooked onion is a much friendlier flavor, and doesn’t take over everything, but instead supports the other flavors.

Caramelized onions get a sweet taste

If you’re taking fried onions a little further, you get caramelized onions. Those are onions that have already cooked through and are now on very low heat and have developed their sugars.

Yes, onions have a small amount of sugar in them, just like carrots or celery or any other vegetable. It’s just that once onions are cooked, their cell walls break down and the sugars can caramelize and get even sweeter.

Read Also: Why Do Onions Have Layers ?

If onions ware too much for you and your taste buds, then consider an onion substitute. While onions are the most pungent of the Allium genus, they’re not the only members. You can easily get the same effects with other Allium members or simply use less onion. SO let’s take a look at the substitutes.

Shallots are possibly the first choice. They’re milder than onions, but still have a nice flavor to them. They may also remind you of garlic a little, but they’re an overall milder option.

Green onions haven’t has the time to develop as strong a flavor as full-on onions. Yes, green onions and spring onions are the same, and they’re both just an underdeveloped, young onion that’s just sprouted.

The best part to use in sauteeing is the white, bulbous part. The green leaves/shoots are no good for frying, only blanching or using raw.

Leeks are like oversized green onions. They’re a little milder than regular onions, but have a bit of a ‘fresh’, green flavor to them. They’re also way more fibrous, so remember to chop them very finely when using in a dish.

Any of these will work very well in place of onions, and remember that you can always just sue less onions. If you really want to bypass all of this, consider onion flakes or ground onion, like onion powder. The flavor will be a little milder, different, but it will still have a hint of onion.