By this point we think everyone’s had watermelon at least once in their life. Some like it, some hate it, but we all know what a watermelon looks like. For such a juicy and delicious fruit, it’s fairly cheap and it can feed you for days.

But why are watermelons red ? Specifically, why is the flesh red but the rind green ? And what’s this about different colored watermelons ? There’s a reason for watermelon’s color, and it answers both questions. Let’s have a look. 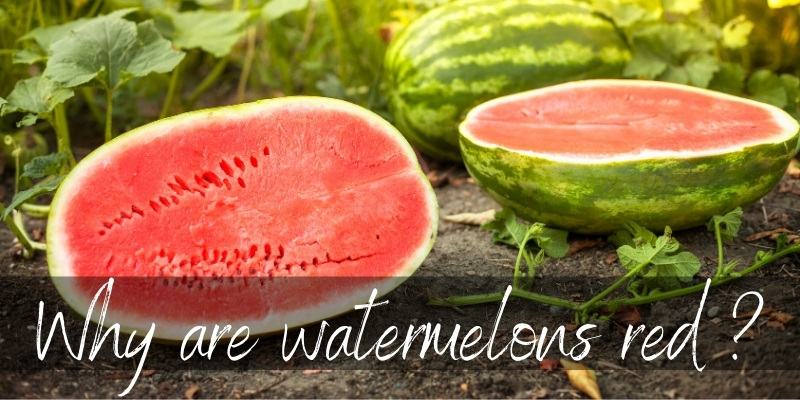 Table Of Content show
1 Why are watermelons red ?
1.1 Is there red dye in watermelon ?
2 You can find different colored watermelons
2.1 Is yellow watermelon safe to eat ?
2.2 Why is my watermelon pink ?
3 How to choose a good watermelon
3.1 Tap it lightly, it should feel like a full water bottle
3.2 Look for a yellow field spot
3.3 Make sure the stem is dried and browning
3.4 Webbing is actually a good sign

Why are watermelons red ?

Watermelons are red because the flesh contains lycopene, a natural red pigment from the carotene family. This means it ranges from yellow to red, and a fully ripe watermelon is a hot pink, nearly red type of shade.

As for the rind, it’s green because it has chlorophyll, the same pigment that aids photosynthesis. Most fruits and vegetables stop producing chlorophyll in their fruits once they develop, but in watermelons this is the standard look.

You may find watermelons with different rinds, but all of them will have a green base, without or without stripes.

Is there red dye in watermelon ?

You’d think watermelon is dyed red if you’ve only ever seen the flesh, cut up and sold in containers. There is no red dye added to watermelon, only the natural red pigment lycopene. You will also find lycopene in carrots and cherries.

You can find different colored watermelons

Actually watermelons, the ones we know and love today, are just one version of the original. The original watermelon was green-skinned with sweet white flesh. But since that white flesh still developed some lycopene, it later mutated into yellow, orange, and red watermelon.

It’s unclear why the red watermelon became the most widely known, but it’s the standard, traditional watermelon. You may also find different colors. Orangeglo is and orange watermelon cultivar. Cream of Saskatchewan is a white flesh watermelon, and it’s supposedly very sweet.

Is yellow watermelon safe to eat ?

Yes, yellow watermelons are safe to eat as they’re a different cultivar but still sweet and edible. If you’re unsure it’s best to ask your local grocer where the watermelons are from. You’ll find most differently-colored watermelons in America, as that’s where most cultivars have been developed. 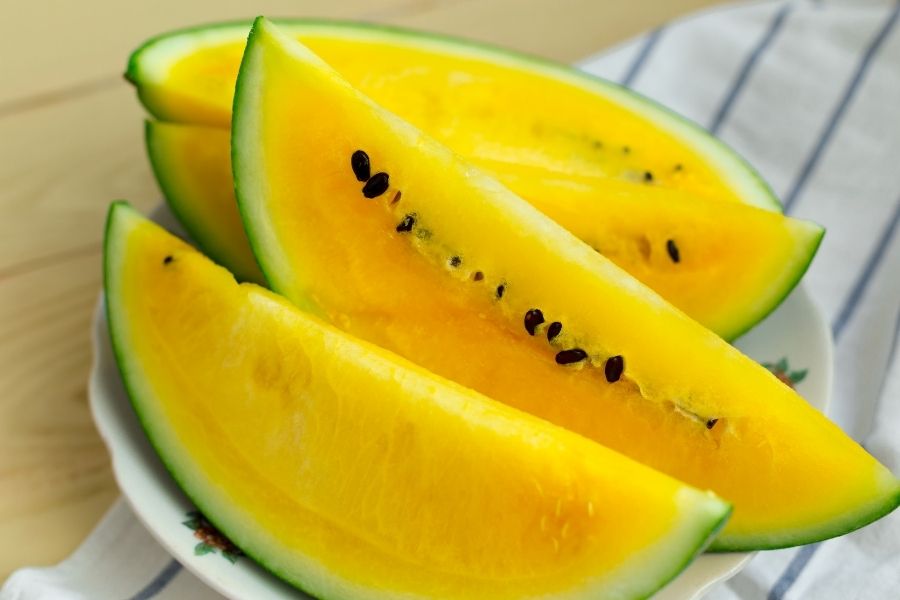 In Europe watermelons are still red, at least in supermarkets.

Why is my watermelon pink ?

Pink flesh watermelons are usually overripe. Watermelons may dry out from the inside, just like a coconut can dry out in side. A pink watermelon is usually a dry, aged watermelon with less flavor and a grainy texture.

This is because the watermelon juice is no longer present in most of the flesh, leading to an almost see-through color. This in turns looks pink, and you’ll find it especially towards the minddle of the watermelon.

If you have the misfortune of finding such a watermelon, there’s no point in eating it. The flavor will be off and the texture will be grainy, it will fall apart in your hands.

How to choose a good watermelon

Let’s see how to choose a good watermelon, since it always seems like a gamble. You slap it, tap it, smell it, listen to it, and you’re still not sure if it’s a good watermelon or not. Here’s what to look for.

Tap it lightly, it should feel like a full water bottle

This is probably the one we all grew up with. You’ve seen people tap, slap, hit, knock on, or just poke watermelons. Most people have no idea what they should be looking for when they do this.

Well, the point is to get the water content in the watermelon to vibrate slightly. Imagine a plastic water bottle, it’s completely full, and perfectly sealed. If you tap it lightly it should reverberate, and it will sound full. Apply that same principle to a big watermelon.

It’s over 90% water and perfectly sealed. If you tap it lightly, it should not sound empty of hollow. And if you keep a hand on it, you should feel the vibrations form that tap.

If you’re unsure, pick it up and weight it with your hands. If it’s good, it should be heavier than it looks for its size. More water means a heavier watermelon, but not always a sweet one. So let’s more to the next point.

Look for a yellow field spot

You may have noticed some spots on watermelons. Not always, because these guys are big and you’re not rolling them on their side all the time. Still, some may have the spot facing upwards when placed in the market.

When selecting your watermelon look for a yellow spot. It shouldn’t be white, as that means it’s not done ripening. And it shouldn’t lean towards brown/orange because it’s starting to rot.

A nice yellow is a good sign. Why ? It’s the side the watermelon was sitting on when it was ripening in the sun. Some farmers actually bother to rotate the melons every now and then, but that’s not the norm.

Look for a field spot. If it’s there and it’s yellow, it’s a ripe watermelon for sure.

Make sure the stem is dried and browning

Another sign to look for is the stem of the watermelon. Most of the time a small bit of stem should be left attached to the fruit, just like with apples.

The stem should be dry and lean towards a greenish brown. If it’s still fully green, it’s likely underripe. It’s the same thing as with avocados. Once the avocado stem is brown and dried and can be pushed off with your thumb, it’s ripe.

Now, you can’t push off the stem of a watermelon but you can definitely check to see the color.

Read Also: Why Are My Stuffed Peppers Bitter

All our lives we’ve been used to fruit being nice and uniform, without bruises and cuts and webbing. We’ve personally skipped over webbed watermelons thinking they were scars and thus the fruit was somehow bad.

In fact it’s a sign the watermelon has developed its sugars and will be very sweet. So do yourself a favor and get the gnarly-looking oens because they’re the most likely to actually be good.