Cabbage may not be everyone’s favorite, but there are some recipes you just can’t make without cabbage. Partly because it’s the wrong texture, and partly because they rely on the cabbage’s strong flavor. Still, you can’t deny how flatulent cabbage can make you, especially when it’s raw cabbage.

But why does cabbage cause gas ? For a food that’s rich in fiber you’d expect it to be more manageable. Well it seems all cruciferous vegetables, cabbage included, share two common traits and it’s what makes them so gas-inducing. 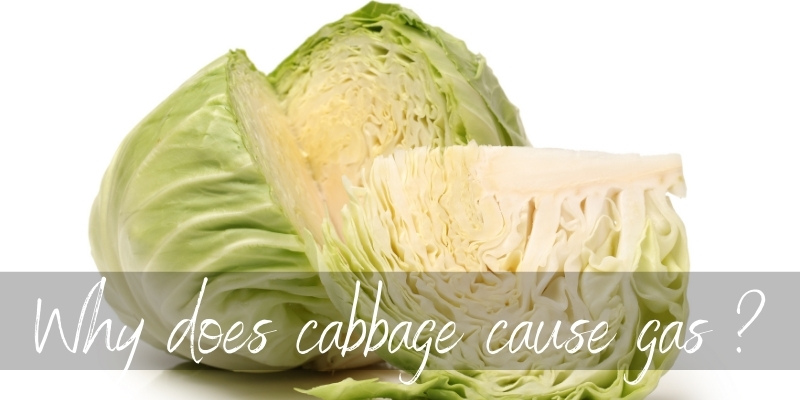 Table Of Content show
1 Why does cabbage cause gas ?
1.1 It’s the fiber in cruciferous vegetables
1.2 The sulfur in cruciferous veggies makes gas that much stronger
1.3 Cooking cabbage will minimize the effect
1.4 Fermented cabbage produces less gas
2 How long after eating cabbage do you get gas ?

Why does cabbage cause gas ?

Cabbage causes gas due to its high fiber content, which does not break down completely in the stomach. When the digested cabbage reaches your intestines, the friendly bacteria try to break it down. As they break it down, they release gas. The more fiber there is to break down, the more gas. Hence, cabbage and other related vegetables are very likely to make everyone more gassy than usual.

And if you’re wondering why the wind is so, um, strong and very hard to ignore, it’s because of the sulfur in cabbage. You see the sulfur will come through and curl everyone’s nose hairs, since all cruciferous vegetables are really good sulfur bearers.

It’s the fiber in cruciferous vegetables

Let’s talk about the fiber in cruciferous vegetables. If you’re not sure which those are, it’s cabbage, broccoli, cauliflower, Brussel sprouts, asparagus, kale, bok choy, and a few others.

This fiber is soluble and can be digested by the stomach, but not all the way. The result is that once the food passes the stomach and reaches the intestines the gut bacteria will try to extract whatever nutrients are left. This includes breaking down the fiber in our digested food.

There is fiber in other foods, such as meat (protein and fiber). The bacteria in our gut has to break down that fiber too, it’s just easier to get through so there is less gas produced.

And if you’re wondering about the bloating when you eat or drink dairy, that’s a bit different. As we leave infancy, we’re no longer equipped to deal with the lactose in milk, or not as well. The enzymes in our stomach can’t handle it as well as they used to, so you get a lot of stomach cramps. Then as the food passes into the intestines, the bacteria have a harder time as well.

The sulfur in cruciferous veggies makes gas that much stronger

Do not tell us you haven’t noticed how rancid cabbage, broccoli and Brussel sprout farts are. Well, aside from the high volume, brought on by the fiber, the smell is from the sulfur in these foods.

So, cabbage. Just like eggs and onions and garlic, it has a lot of sulfur in it. It’s what smells so bad when you’re cooking fresh cabbage. And it’s the common smell/flavor between broccoli, cauliflower, asparagus, and all the other veggies kids hate.

This translates into the smell of the gas you pass. The more raw or just partially cooked cruciferous veggies you eat, the stronger the smell.

Cooking cabbage will minimize the effect

There is a way to minimize the strength and the smell of the gas. You simply cook the cabbage, which makes it much easier to digest. This means the fiber in each piece of cabbage will already be softened and broken down, more manageable for the gut. And a good portion of that sulfur will exit the cabbage as it’s cooking. Keep an open window then cooking cabbage or anything similar. 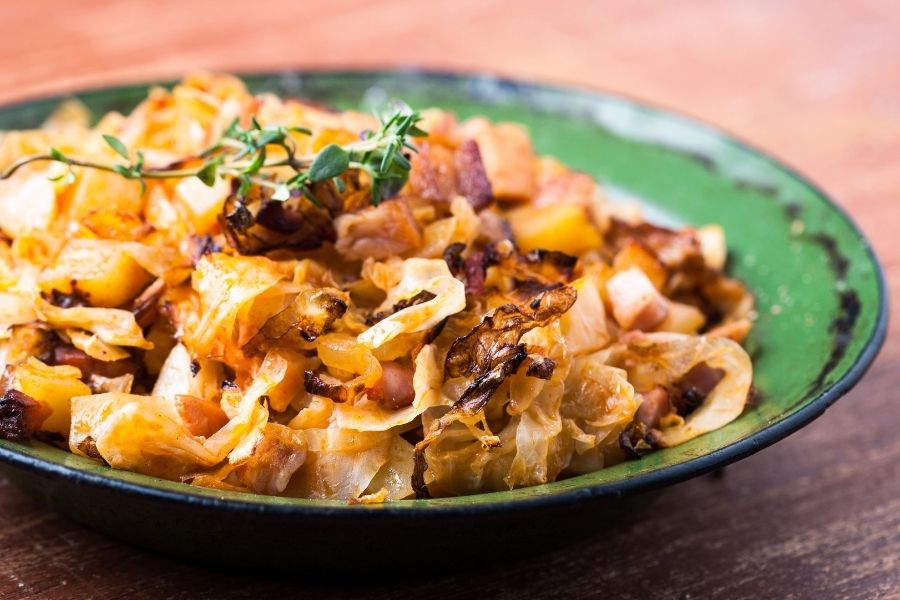 Fermented foods, cabbage included, tend to produce less gas. This is because the fiber is already broken down by the fermentation process. And it comes with helpful probiotics that end up helping the bacteria in our gut ! This includes yogurt and kombucha, yes.

Back to fermented cabbage, it’s normally going to produce less gas. But too much of it, and too often, will lead to an imbalance in the gut. The probiotics you bring can help, but they can overpower the bacteria in the gut if you bring too much of it. This is not a problem if you eat fermented cabbage every now and then, but it can be a problem if it’s your main vegetable, week in and week out.

Read Also: Why Is Cabbage Purple ?

How long after eating cabbage do you get gas ?

Cabbage, raw, takes about 40 minutes to digest. This means that you may experience gas about an hour after the meal, and the first couple of hours as the bacteria breaks down the leftover fiber. Fermented cabbage and cooked cabbage will go down much easier.

And that’s pretty much it. Now you know why that coleslaw made you bloat and pass gas. It’s pretty much normal when dealing with cabbage, there’s no real way around it.