Ever bitten into a delicious-looking cucumber, only to find out it’s the most bitter thing ever ? If yes, you may wonder why cucumbers are bitter sometimes, and what to do about it.

After all, no one’s happy to buy a whole bunch of cucumbers and not use them because they’re too bitter. We found this out the hard way, when we made a beautiful Mediterranean salad that included cucumbers and has to pick out nearly every cucumber slice. They were just uneatable.

If you’ve ever been in a similar situation then read on to find out why cucumbers can get bitter, and what we can do about that. 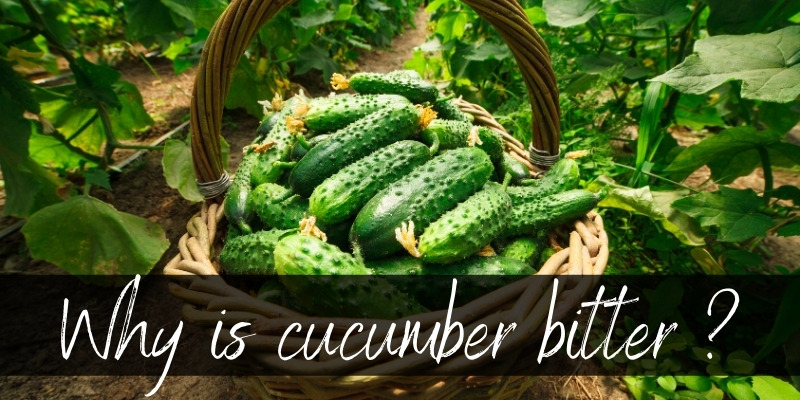 Table Of Content show
1 Why is cucumber bitter ?
1.1 Is cucurbitacin toxic ?
2 Is it ok to eat a bitter cucumber ?
2.1 Can I use bitter cucumbers for pickles ?
3 How to remove bitterness from cucumber
3.1 Peel cucumber and slice off both ends
3.2 Does milking cucumbers help reduce bitterness ?
4 How to tell a cucumber will be bitter
5 Conclusion

Why is cucumber bitter ?

Cucumbers are bitter because they contain too much cucurbitacin. All cucumbers contain a small amount, but the bitter ones will have a much higher dose.

This happens when the growing conditions of cucumbers are too dry, or too hot. Cucurbitacin is usually found in cucumbers’ ends and skin, so removing those will help remove bitterness.

To be clear, all veggies in the Cucurbitaceae family – zucchini, cucumbers, pumpkin, watermelon, melon – have some amount of cucurbitacin. It’s a fairly toxic compound, and it’s the natural defense these veggies have against herbivores.

In short it’s how the cucumber protects itself from being eaten. It’s just that humans have managed the growing conditions of cucumbers so they don’t produce as much cucurbitacin. That, and we’ve probably developed a tolerance to it, like we did with the capsaicin in chili.

Yes, cucurbitacin is fairly toxic. You shouldn’t eat an entire cucumber if it’s bitter. In fact it’ll probably be so bitter you can’t even eat it all the way, even if you add salt.

All the better, because reactions to cucurbitacin include nausea, vomiting, and diarrhea. It’s best to stop eating any food made from a bitter cucumber, pumpkin, zucchini, squash, etc.

Read Also:Why is My Rutabaga Bitter?

Is it ok to eat a bitter cucumber ?

No, you shouldn’t be eating bitter cucumbers. Please be sure to peel it and cut off the ends, otherwise, you may just get a bad indigestion. Conversely, don’t give bitter cucumbers to pets or any domestic animals. They will have a stronger reaction than you, as cucurbitacin was originally intended to deter animals from eating the veggies.

Can I use bitter cucumbers for pickles ?

Worse is that the bitterness may spread to other pickles in the jar. 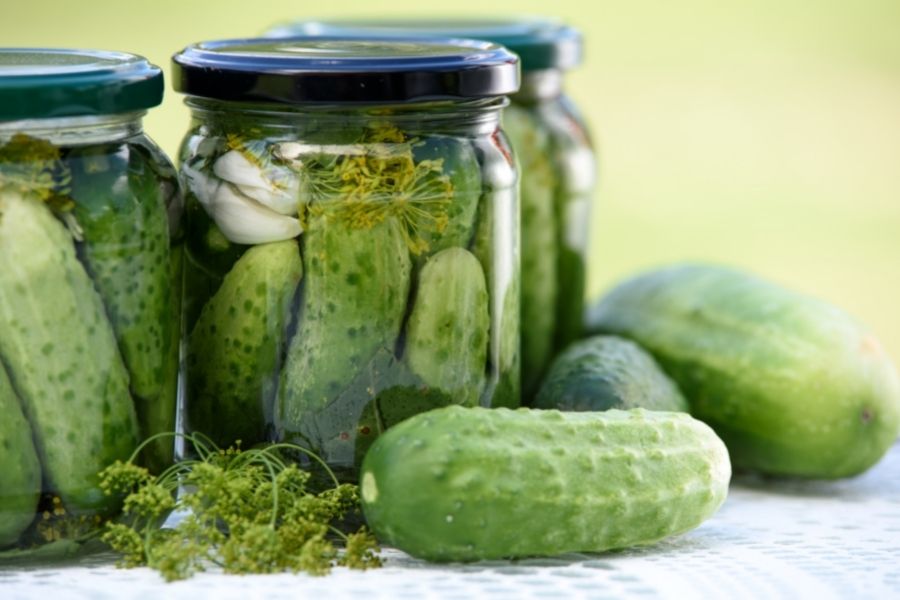 How to remove bitterness from cucumber

There aren’t many ways of removing bitterness from a cucumber. We know of one method that works for sure, and we’ve heard of another that may or may not work. We’ll start with the one we can vouch for.

Peel cucumber and slice off both ends

Yes, it’s as simple as that. If a cucumber ends up with too much cucurbitacin, it’ll be mostly in the skin and the cucumber’s ends. Some folks stay the stem end, some say the flowering end. Just cut off both ends and you’ll be fine.

Now it’s true that you may sacrifice some nutrients this way, since a lot are found in the cucumber’s skin. But it’s that or keeping a bitter toxin in your food.

There’s an upside to this though. By peeling and cutting off the ends you’re also removing any dirt or gunk that may be still stuck the cucumber skin after washing. As you know, cucumber can get a little sticky, like zucchini. Once dirt gets stuck to the sticky liquid, it’s hard to wash off. 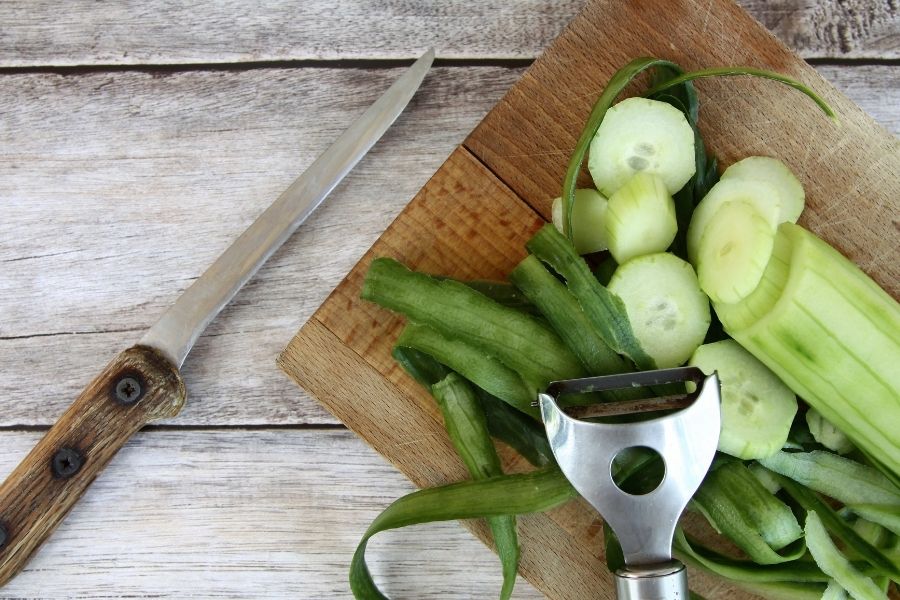 We honestly don’t know, but we’re inclined to say it doesn’t help. There’s no real science behind it. As in, cucurbitacin is distributed evenly throughout the cucumber’s skin. The way we see it, milking one end will not draw the bitterness from the other end and all the skin.

However we do believe that believing something may have a placebo effect. Suppose it’s knowledge passed down from generation to generation. In that case, you may end up believing and tasting no bitterness in cucumbers after milking them. Even if the cucumbers are objectively bitter.

If you want, you can try it yourself. Try having a few cucumbers milked, and a few regular. Compare and see the results. We’d like to believe that we’re wrong and milking a cucumber really does help.

Confused about the milking part ? It sounds weird but it’s actually kind of simple. You need a fresh cucumber, and you need to slice off an end. Rub the flat part of the end on the flat part of the cucumber. A white foam will appear as you’re ‘milking’ and people assume that’s the cucurbitacin.

Rinse the whole cucumber, and you may or may not have a not-bitter cucumber. We think the white foam is actually the natural juice in cucumber. That’s just how it reacts when it’s ‘beaten’, kind of like beating egg whites or aquafaba. Not the cucurbitacin.

How to tell a cucumber will be bitter

Unfortunately there’s no clear way to tell exactly which cucumber from a bunch will be bitter. There are a few tell-tale signs, but they may not always apply and they may be misleading.

If you’re growing your own cucumbers and have had a dry, hot season you can expect bitter cucumbers. But if you’re just shopping in a supermarket there’s only one thing you can look at, and even this won’t always be true.

Cucumbers are usually a deep, dark green. If you see lighter green ones, or have stripes going down the length, those may be bitter. That’s just our personal experience with the ones that were bitter in our salad.

If all the cucumbers are an equally deep shade of green, we can’t help.

Hopefully you won’t run into too many bitter cucumbers. They can ruin your food and even make you feel sick. We’ve noticed that English cucumbers (the big, long ones) are the least likely to be bitter. They may have a watered down taste, but at least they’re safe.

So, cucumber is bitter due to its high cucurbitacin content, which can harm you, making it not entirely safe to eat.

I hope this article helped you know what to do with bitter cucumbers because you will have some that are bitter from time to time since it’s not easy to tell if they will be bitter or not.