You may have noticed how similar cucumbers are to zucchini, and by extension many squash types. Does that make the cucumber a part of the squash family ?

If yes, does that mean those with a squash allergy should avoid cucumbers too ? And if cucumber is a squash can you easily swap it for zucchini or courgette ? Let’s find out. 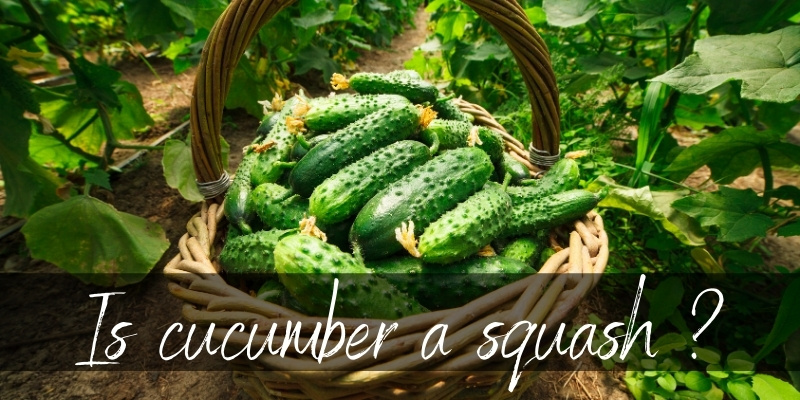 Table Of Content show
1 Is cucumber a squash ?
1.1 What is a squash ?
2 The Cucurbitaceae family is very inclusive
2.1 Cucumber vs zucchini
2.2 You can swap cucumber for zucchini
3 Cucumbers can be bitter too

Is cucumber a squash ?

Cucumber is not a squash, but is closely related to the squash family. Cucumber is a member of the Cucurbitaceae family, and the Cucumis genus, while squash is in the same family but the Cucurbita genus. The two genuses are closely related, which is why cucumbers may have such a confusing status in the culinary world.

The fact that zucchini looks and tastes a lot like cucumber doesn’t help clear things up either.

What is a squash ?

To make things easier, squash is a loose term that is widely applied to zucchini, butternut squash, gourds, and even pumpkins. It generally refers to Cucurbitaceae members that develop a thick outer skin, even the summer ones.

Summer squash is different from winter squash because the outer skin remains thin, as opposed to a winter squash’s thick rind. Think of the difference between zucchini (summer) and pumpkin (winter).

You may be wondering why cucumber isn’t classified as a summer squash. Well, every veggie in the squash family is in the Cucurbita genus, while cucumbers are in the Cucumis genus. So they’re something like cousins. Related, similar, but definitely not the same.

The Cucurbitaceae family is very inclusive

The Cucurbitaceae is very large and includes a wide range of vegetable and fruits that might not seem related at first. But once you sit down and take a good look at each of them, you notice the similarities.

A member that may seem surprising is the watermelon, and melons in general. Yes, the big, green fruit is another cousin of the cucumber and zucchini. It has its own genus, namely the Citrullus genus. Despite the name it has nothing to do with the Citrus genus in the Rutaceae family.

An interesting point about about the Citrullus genus, it’s actually classified as a desert vine ! So much like a cactus, a watermelon stores a whole lot of water in its fruit. Does this mean you’ll stumble across a watermelon in the dessert ? No, but it does mean that watermelons need hot, hot summers to develop.

Who else is in this big family ? Butternut squash and pumpkins, they’re a fan favorite and manage to be in everyone’s house when the cold season hits.

Let’s talk about cucumbers and zucchini for a bit. These two are so similar you could swear they’re actually slightly different versions of the same thing.

Well, for one you need to look at the ends of both. Zucchini has the stem still attached, while cucumber has a barely noticeable stem. The bumps on cucumber are also a big difference, as zucchini has no bumps but may have very fine, short hairs.

There’s a bit of a difference in flavor as well. Cucumbers taste fresh and watery, and their very smell can instantly trigger hunger in some people the same way freshly cut garlic does.

Zucchini is much milder in flavor, neutral actually. It’s also not as watery as a cucumber, but it will release a fair amount of water when cooked. 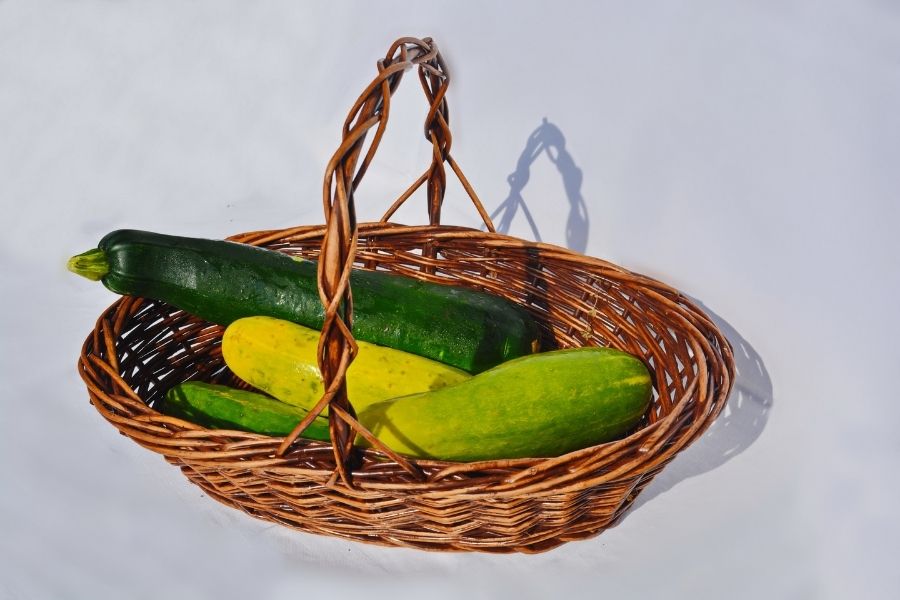 You can swap cucumber for zucchini

If you’re in a tight spot and really can’t find the right veggie, you can swap one with the other. So for example if you’re making a salad you can throw in some zucchini but don’t expect it to be just as tasty as a cucumber. You may need to add a little seasoning.

Conversely, if you’re making ratatouille and can’t find any zucchini you may try using a cucumber instead, but be sure to cut it thicker. Cucumber has more water so it will wilt even more when cooked.

If you do swap zucchini for cucumber or the other way around, remember that they’re related, but not the same thing. Meaning they will give you roughly the same texture and flavor profile, but it’s not the exact same.

Cucumbers can be bitter too

Since cucumbers are related to zucchini, you may be wondering if they can get bitter too. The answer is yes, cucumbers can be bitter too and it’s all because of cucurbitacin. That is a class of compounds that is common in Cucurbitaceae members, and it’s a defense mechanism. It’s bitter, and mostly found in the outer skin and ends of the vegetable. The point is to deter animals from eating them.

It seems humans have successfully grow crops that do not have a high amount of cucurbitacin, though some mishaps happen from time to time. It’s mostly when the crops suffer hot, dry weather and/or they are too mature when picked. There’s no sure-fire way of telling which cucumber is going to be bitter. You may avoid the ones with a yellow tinge, but they can sometimes be alright too.

The best way to remove the bitterness from a cucumber (or zucchini) is to peel the outer skin and cut off both ends. It may be wasteful, but if you take a bite and it’s bitter you’ll likely want to peel it.

In short no, cucumbers are not squashes but they are related to the squash family. Meaning that you can substitute zucchini for cucumber most of the time, but do not expect the same exact flavor.