Whether it’s the nutritional value or the lovely way it looks, kiwi is surely an extraordinary fruit featuring vibrant green insides studded with tiny black seeds.

Its great flavor makes it a wonderful element of fruit bowls as well as several desserts and drinks. The fruit came to be recognized as the national fruit of New Zealand and is often linked with a high price around the globe.

Purchasing the fruit at the general store or the farmer’s market, have you ever wondered why is kiwi so expensive? If yes, scroll down to learn the reasons as well as to know how you could cut on some cost while buying kiwi. 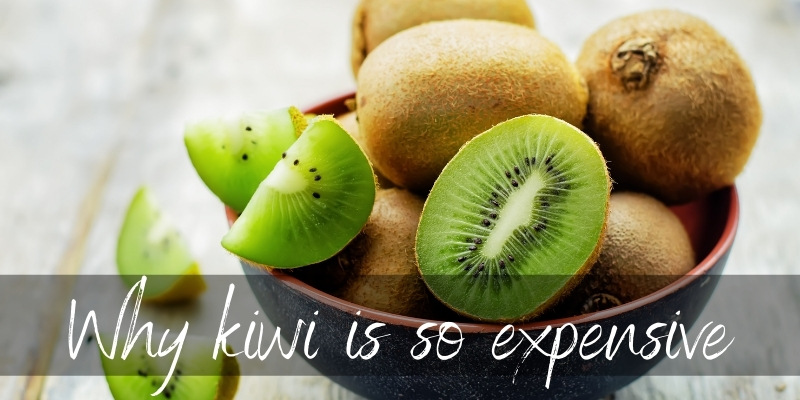 Table Of Content show
1 Why is kiwi fruit expensive?
1.1 Kiwi is often imported (more taxes and markups)
1.2 Kiwi is in high demand, low supply
1.3 Kiwis has a short shelf-life
1.4 Kiwi’s nutritional value makes it pricey
2 How to Save Costs on Kiwi
2.1 Buy frozen or canned kiwi
2.2 Buy kiwi when it’s in season
2.3 Buy kiwi in bulk, freeze for later
2.4 Grow your own kiwi !

Why is kiwi fruit expensive?

Kiwi is so expensive because it’s a fruit that perishes quickly, and has to be imported into most countries. The main producers are China, Italy, New Zealand, Iran, and Chile.

Because of the many middlemen, kiwifruit’s final price rises significantly. Export-import taxes, transport, price markups from farmers to sellers to further sellers to exporters and so on

Kiwi is an exotic fruit that can sell for very high prices in most local stores. It has a lot of dough for a fruit its size, and is delicious at the same time. There are a few reasons for the huge price tag.

On a global level, New Zealand which 90 percent of its kiwi production, but not the total global production. Europe which exports 80 percent of the produce it makes.

As kiwi mostly has to be imported, it involves higher risk of damages, taxes, and more transportation costs – all of which makes it an expensive fruit. A higher demand and lesser supply is the chief reason why its prices are high, while the other factors include the weather conditions and season.

So let’s get to explaining these reasons more thoroughly, shall we ?

As stated above, kiwi is native to New Zealand. But it’s grown in huge amounts in China, followed by Italy, New Zealand, Iran, and Chile. A lot of it is for export.

That itself makes it more expensive than most domestic fruits of various regions. The produce distributors depend on the main growing areas. If a major growing spot falls on hard times due to unsuitable weather conditions, the yields can decline and lead to price rise. 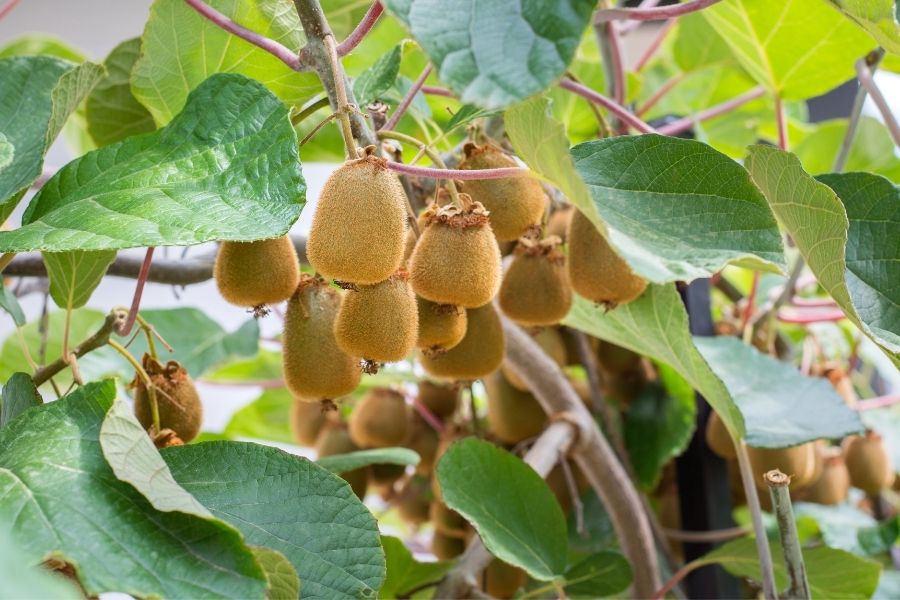 When the fruit is majorly an import, a significant share of the prices is influenced because of the shipping and handling costs.

The law of supply and demand influences the cost of almost everything that you buy, and kiwi is no different. When you consider the appeal of kiwi, it’s surely been hyped up over the last decade.

The demand for kiwi in major parts of the world exceeds the supply available — thus a higher price at all the stores and local fruit stands.

Kiwis has a short shelf-life

Short shelf-life and frailty also play a key role in making kiwi pricey. The fact that spoilage happens during the whole transportation ordeals cuts into the sales margins, thereby calling for higher prices to compensate for the same.

Just like other fruits, kiwi produce is also subject to the harsh effects of climate. The price built into bumper fruit produce needs to account for the years when weather effects cause loss of healthy produce.

Kiwi is highly perishable. Its tangy, juicy consistency can only be maintained if it is stored under certain conditions and transported following some specific guidelines.

The preparations done before storing kiwi for transport or in warehouses also play a major role in the shelf life, and eventually, the cost determination.

In fact, a ripened kiwi cannot last for more than 4 weeks in the refrigerator. The fruits that are not fully ripe need to be stored at a temperature ranging between 18 C to 21 C for about 2 months.

Storing kiwi t also cannot be done along with other fruits that produce ethylene, including apples and bananas. It speeds up the ripening process, and by the time the fruit is out, it turns all mushy.

Apart from its great taste and cute appearance, kiwi is loaded with nutritional value. The fruit’s fuzzy brown exterior with the bright colored flesh hides a bundle of essential vitamins and minerals, which makes the fruit costly.

It has got lots of Vitamin C, dietary fiber and folate, along with amazing antioxidant effects. Fruits that are accompanied by multiple health benefits often come pricey.

How to Save Costs on Kiwi

A few quick tips can help you cut your kiwi fruits’ cost and make it all fall in a reasonable budget.

The fact that producers go for freezing the fruit in bulk several times a year makes sure that the price point stays the same. That’s why frozen kiwi prices are not affected as the fresh produce, which makes buying frozen fruit a good idea. 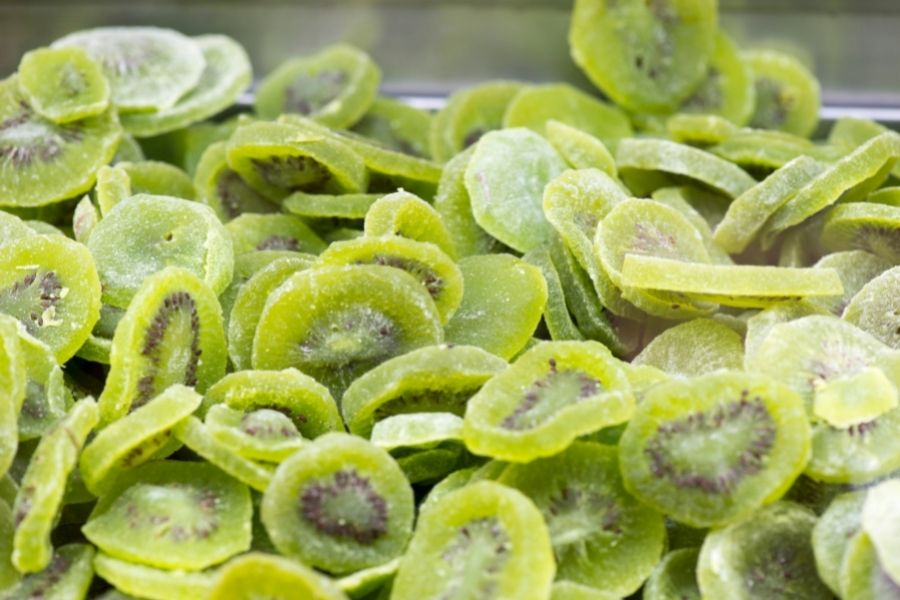 Canned kiwi is also a goo option, because it’s definitely soft enough to eat, and it’s often sweetened. This makes it a perfect candidate  for fruit salads.

Buy kiwi when it’s in season

Eating what’s in season directly implies to saving money. If you are someone who loves to have kiwi throughout the year even when it’s out of season – simply get loads of it when it’s in season and freeze it.

No doubt buying the fruit in bulk is going to cut on the cost. However, make sure you buy in bulk only if you have the means to use all the produce. Some people simply make bulk purchases and split them between family members, friends, coworkers, or neighbors.

You can actually freeze kiwi if you have too much leftover. We recommend you freeze it peeled and cut into pieces. The texture is mushy when you thaw it, so it’s best used in smoothies or fruit jellies.

Grow your own kiwi !

The good news is that if you live in temperate climates with adequate summer heat, but not excessive heat, you can surely avoid buying expensive kiwi and grow some your own. Those who are fond of gardening love to grow their own exotic fruits if they live around favorable weather conditions.

One can grow kiwi from its seeds or through stem cutting of an existing kiwi plant. However, going for stem cutting is a better option for some as plants grown from the seeds of the fruit can take a few years to yield fruit.

Gardeningknowhow have a really good guide on growing your own kiwifruit. Just know that the kiwi you grow at home may end up smaller than store-bought kiwis. It depends on that variety you buy, and how good the soil is.