Are you making the loveliest cake ever, and can’t decide between a ganache or frosting on the outer layer ? Both have their good parts, and both can be used to lock in moisture in the cake.

But which is better ? What are the main difference between ganache and frosting ? And what is each of these, anyway ? You hear people talking about them as if you already know. Let’s take the time to explain and compare, shall we ? 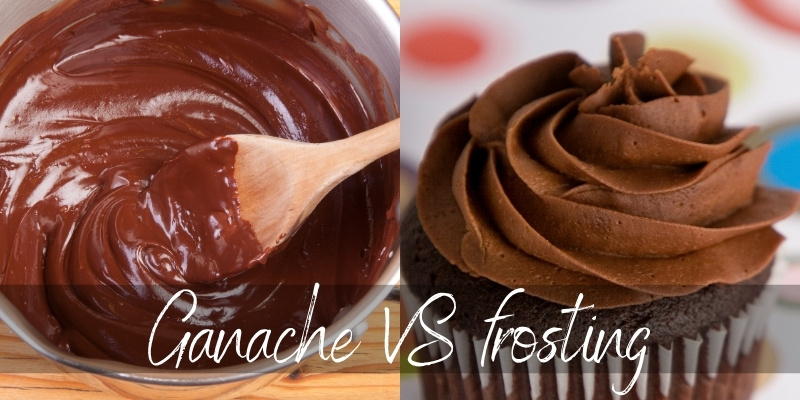 Table Of Content show
1 Ganache vs frosting
1.1 What is ganache ?
1.2 What is frosting ?
1.3 1. Ganache is more of a glaze
1.4 2. Frosting is butter-based, ganache uses cream
1.5 3. Ganache has a stronger chocolate flavor
1.6 4. Frosting is easier to slice through
2 Ganache can be made into a frosting
3 Is ganache better than buttercream ?
4 Does ganache get hard ?

Ganache is a much heavier cream than frosting, in that it has more cocoa solids and it’s not whipped. Frosting is lighter, fluffy, and relies on the friction between butter and icing sugar to get a fluffy finish.

Ganache is compact, and can even be poured several times, making for a very thick or thin coating. In some cases ganache may not even set completely, but instead remain moist and sticky.

An important point is also that ganache can get downright hard, almost like dark chocolate. Frosting is much easier to slice through, as it’s lighter and has millions of tiny air bubbles.

Now let’s take a look at how each of these two is made, and then their main differences.

Ganache is chocolate melted into hot cream. What kind of chocolate you use has a huge impact on how the ganache behaves, Dark chocolate has a whole lot of cocoa butter, which will harden at room temp and even more in the fridge. White chocolate ganache is much softer and will need much less cream if you want it to set hard.

When making ganache, it’s important to get the ratio of chocolate to cream right. Too much chocolate and you end up with a shell that’s way too hard. But that is useful for coating fruit in chocolate or making pralines.

Too little chocolate and you get a runny ganache that will never set, but instead get sticky when you put it in the fridge. Ganache will rarely remain shiny, even if you add a bit of butter.

The trouble is that cold ganache is matter, while warm ganache will stay relatively shiny. SO if you want some shine, bring the cake out about an hour before serving.

Frosting is unsalted butter beaten with sugar until it forms a light and airy mixture that may remind you of mousse. You can then use the frosting as a filling, outer coat, or use it to design flowers or different ornaments on your cake.

You can get chocolate frosting, you it’s a bit more complicated. You need to first make a medium thickness ganache, let it cool to room temperature, then blend it with the butter and sugar. It may end up a little grainy, so it’s important to not make the ganache too hard.

Alright, not let’s take a look at how these two chef favorites are different.

1. Ganache is more of a glaze

Ganache is usually used as a glaze, to decorate cakes or eclairs or anything, really. If you make your ganache thick enough it could even be piped like frosting and used as decoration. If you want to make some really nice dripping chocolate effect, use ganache and let it get thick. Then let it drip down the sides, maybe even add extra on the side to get the right drip. 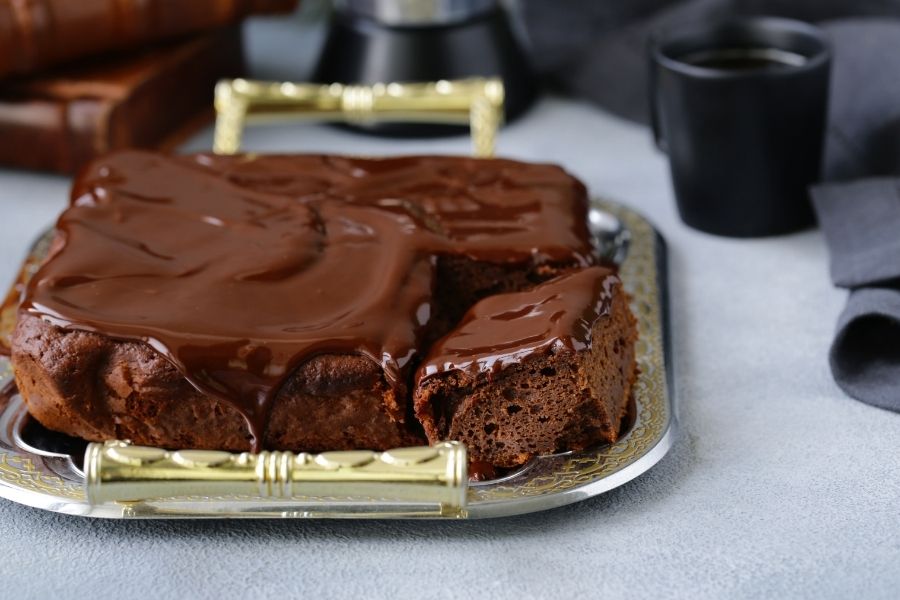 The trouble with ganache as a glaze is that it can get too hard, and this could ruin the cake when you cut into it, especially if it’s a very moist cake with lots of cream.

Frosting can and will harden too, if you let it sit in the fridge until serving. It won’t be as hard as butter, but it will firm up. Leave it on the counter overnight and it may just go bad !

Another important distinction is the way each of these is made. Depending on your personal preference in terms of flavor, one of these may be too heavy for you.

Frosting is butter, pure putter mixed with sugar and beaten together until it gets light and fluffy. You can add food coloring to get a specific color, but most of the time it will be off-white. For some, this kind of frosting is incredibly thick, heavy, and can’t get over the fact that they’re eating sweetened butter. 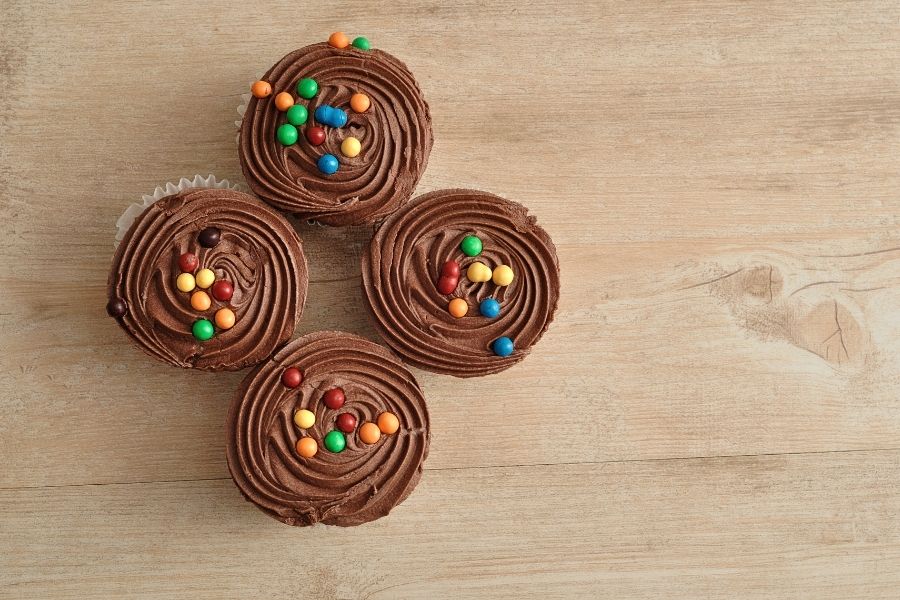 Ganache can be overwhelming too, in that it’s essentially chocolate melted into cream. How much chocolate and how much cream depends on your particular recipe. There is no butter in ganache, but if you don’t have cream, you may try use butter instead. The results will be a little iffy, and the result will set very quickly and much harder than regular ganache.

As for frosting, you can get vegan frosting by using margarine or shortening, but it may not set the same way as buttercream frosting. Still, it’s definitely something you can try.

3. Ganache has a stronger chocolate flavor

Say you made chocolate frosting, either by adding cocoa powder or some melted chocolate into the buttercream. You will still have much more of a chocolate flavor in the ganache than in the frosting.

So if you’re looking for a chocolate-heavy cake coating, go for ganache because it’s definitely the winner here. If you want it to be softer, just use more cream, or not as much chocolate.

4. Frosting is easier to slice through

When you’re slicing cake or pastries, it’s very important to get a nice cut going. One without crumbs of extra cream, a nice clean cut each time. Well, ganache can be a bit of a pain, even for a hot knife. The thing is, if you let your ganache set and it’s the very hard kind, it will break along the line and if your cake is also very moist, it may even take parts of the cake that it’s not supposed to.

Frosting is much softer and you don’t necessarily need a hot knife to cut through it. You still need to clean it after each slice, but you get a nicer line each time.

Ganache can be made into a frosting

Of course, you can have the best of both worlds and make your ganache into a frosting. Or at least something very similar to frosting. For this you need ganache that is semi-liquid, very soft, meaning it should have more fat than cocoa solids. So if using dark chocolate, use less chocolate and more cream. If using milk chocolate do 1:1, and if using white chocolate, use more chocolate than cream.

When it’s melted, let it cool close to room temperature. Then whip it like there’s no tomorrow, and the fats in the ganache should keep it fluffy. If it’s warm, it won’t work, it needs to be room temperature or a bit colder. To make sure you get a better result, you can add some room temp unsalted butter and mix the two.

Is ganache better than buttercream ?

Buttercream is great on its own, but when it comes to sealing cakes and making sure you get the chocolate flavor down pat, ganache wins. OF course, it really depends on what you’re making. It’s like asking if baked apple is better than applesauce. What are you making ?

There is one thing though. Since chocolate keeps for a long time, and ganache is chocolate-based, your dessert has a higher chance of staying intact if you use ganache.

Also a ganache glaze is sturdier than buttercream frosting. If you nick the ganache, it’s less visible than in frosting.

Read Also: What Is Gianduja ?

Does ganache get hard ?

Yes, ganache can get hard if the cocoa butter is most of the recipe. Not only that, but cocoa solids help set the ganache even harder. So ganache made with dark chocolate (85% for best results) will definitely set. 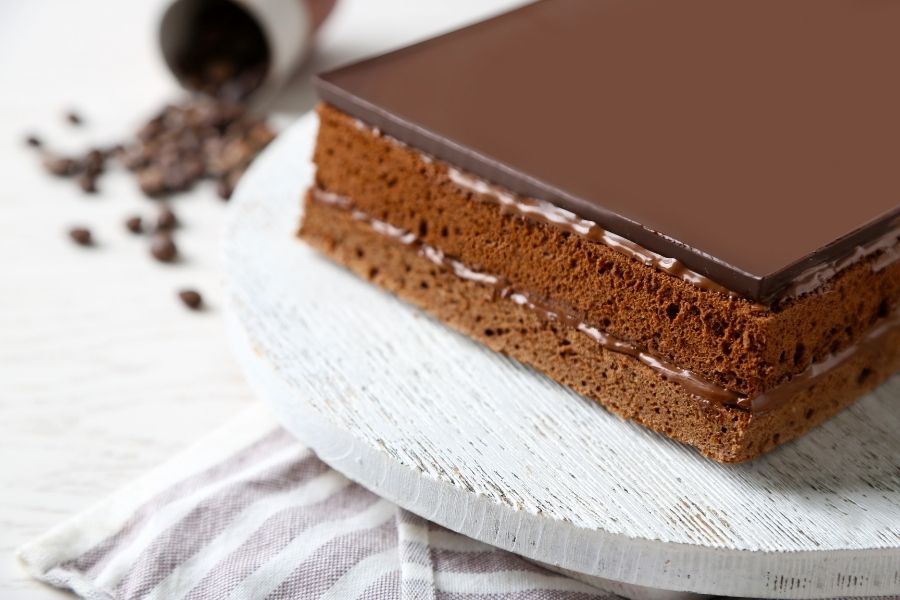 Ganache made with milk chocolate will harden a little, but may be sticky to the touch and never completely harden.

White chocolate ganache needs very little cream because while chocolate is incredibly thin and melty. You’re better off using a 1:3 cream to white chocolate ration in such a ganache if you want to to get hard and stay on the cake.