Shrimp is a great source of protein and it’s always great at a dinner party, but there’s a bit of a conundrum going on.

Folks aren’t really sure what shrimp actually is.

None of the above ?

This is especially important for those who have a food allergy and need to know what’s on their plate.

So this is what we’ll be talking about today. What shrimp is classified as, and then answer a few common shrimp questions. 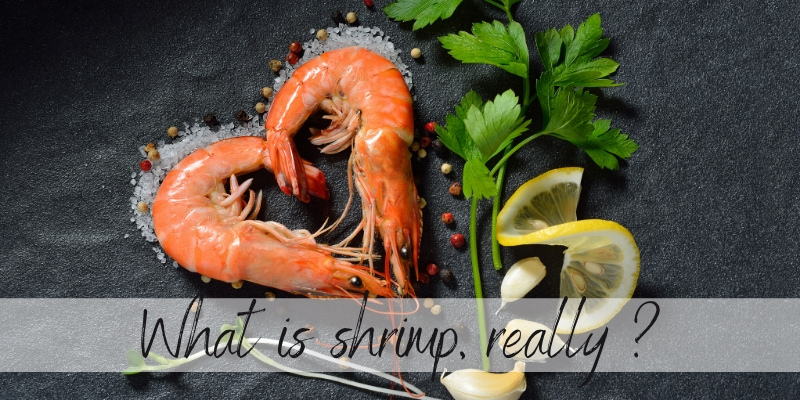 No, shrimp are not classified as fish. This is because fish have a few prerequisites that shrimp don’t meet, like:

Shrimp have their skeleton on the outside, an exoskeleton. The very shape of their exoskeleton is very different from the shape of a fish.

Where the head, neck, and thorax of the fish are somewhat flexible, with muscle under the skin, over a bone frame, shrimps simply have a thick, hardened casing that serves as a sort of armor.

Their abdomen is segmented and encased in segmented shell armor.

Fish have no discernible limbs, instead using their fins to swim through the sea. Shrimp have 10 sets of limbs with which they roam the sea floor, and they may propel themselves with their tails if they have to.

They also use the first 3 sets of legs (or arms, in this case) closest to their mouths to feed.

So in short no, shrimp have very little in common with fish. They both live in the sea, but their bodies and eating habits are very different.

You may see shrimp classified as a type of fish, because some folks refer to any seafaring creature as ‘fish’, so keep that in mind.

Yes, shrimp is considered a type of seafood. This is a sort of umbrella term that comprises of animals like crab, crayfish, lobster, oysters, clams, squid, octopus, sea urchins, and fish.

Seafood has been around for thousands of years, in terms of dishes and traditional foods in regions where the seaside is vast.

Shrimp in particular are native to the coastal floor, and don’t venture very far into the sea. They can also be found in fresh water, in rivers and lakes though there are many species.

Yes, shrimp can be classified as shellfish.

The term shellfish was first used in fisheries and by fishermen in relation to seafood that has an exoskeleton, like the shrimp, crab, lobster but may also include oysters, mollusks, scallops, and very rarely starfish.

Should I be worried about shellfish allergies ?

Yes, those with shellfish allergies may want to steer clear from shrimps, as well as any other seafaring animal that has an exoskeleton.

It’s best to get the allergy checked out, so your doctor can tell you exactly when foods to avoid.

For example some folks may be allergic to shrimp, lobsters, prawns, crayfish but somehow be okay when eating oysters, mussels or scallops.

Other may have a reaction to any sort of seafood, be it shellfish or not, but not know it’s a general one.

Shrimp is a seafaring animal that’s in the same family as crabs, lobsters, prawns, crayfish.

It has an exoskeleton like its cousins, and has no skeletal frame on the inside.

And much like its cousins it turns a reddish, coral color when exposed to heat, despite being initially gray and a little translucent. 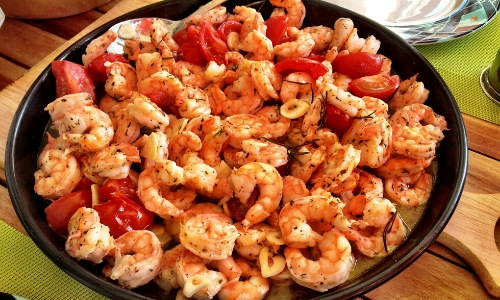 Not all shrimp is eaten, since there are many species and and most of them are too small to be a adequate food source.

As for the producing countries, the biggest producers are China, Thailand, Indonesia, India, Vietnam, Brazil, Ecuador, and Bangladesh.

It’s mostly America and Europe that import shrimp, since most other markets have the producers much closer (like East and Southeast Asia).

In general shrimp is regarded as one of the easiest seafoods to eat, in terms of flavor, how well it pairs with other foods, and how easy it is to cook.

Most of the recipes involving shrimp come from coastal areas, such as the Spanish paella, a form of Italian pasta (pasta marinara), and many East and Southeast dishes (most notably sushi).

Shrimp are so common in recipes that you’ll find them included in more western foods, so you’ve probably got a question or two on your mind.

This section will cover some common shrimp questions, and hopefully you’ll find your question answered here.

What’s the vein in shrimp ?

The vein itself does not carry blood, but is instead a tube that serves the same purpose as the intestines in humans.

Most often it’s filled with grit, or rather whatever was left inside the shrimp’s digestive tract at the moment it was harvested.

Should shrimp be deveined when cooked ?

Deveining shrimp is a personal preference. Objectively the vein is not harmful to humans, but many find it ruins the presentation of the dish, or they simply don’t want to eat it.

In this case deveining the shrimp is fairly easy, since it’s located right under the shrimp’s meat, on the backside.

You sill need a thin, sharp knife to gently score the skin right next to the vein, alongside it, and you can then pull out the vein with the tip of the knife.

Do not cut right on top of the vein, since you may cut the vein open and it will be very messy.

If you’re working with a large batch of shrimp this will take a lot of time, paired with removing the head and torso and generally cleaning things up.

To get around this you can find shrimp that’s already been deveined, but it will come with a higher pricetag.

Know that larger shrimp – like tiger prawn – are much easier to devein.

Are shrimp and prawn the same ?

No, shrimp and prawn are not the same animal.

Some say that shrimp is just a smaller prawn, but there are anatomical differences between the two.

Prawns are larger, yes, but they also have less of a bend to their bodies than shrimp do. A few other differences include:

For culinary purposes though, they are used the same and you will find the name used interchangeably.

The famous tiger prawn is actually a real prawn (Penaeus monodon, suborder Dendrobranchiata). It’s one of the largest prawns out there, and it dwarfs any shrimp by comparison.

From a vegetarian and vegan standpoint, all animals are considered meat. This includes seafood, and thus shrimp and prawns.

The reason some folks may be confused about this is because there are several types of vegetarians, such as:

Keep in mind that not all vegetarians are vegetarians for personal reasons, some have this diet and lifestyle for health or medical reasons.

Variations will occur in any sort of eating habit, and you may encounter vegetarians who may have to include some form of meat on the menu every now and then. 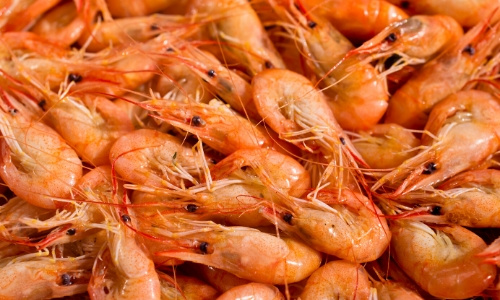 Can you eat raw shrimp ?

In order to avoid food poisoning shrimp should be cooked.

Eating raw shrimp may be safe, only if the shrimp is 100% disease free, has no bacteria or viruses in or on its body.

This is hard to make sure, so it’s best to be safe when dealing with shrimp and cook it on high heat for  several minutes.

There are some parts of the word that indeed treat raw or live shrimp as a delicacy, though the problem of food poisoning comes into play.

How long should you cook shrimp ?

Shrimp is very easy to cook, which is why it’s not supposed to be cooked for very long. You need to constantly keep your eyes on them, since they can overcook very quickly.

Raw shrimp has a gray, translucent look about it. When placed in a very hot skillet, it will start to turn orange-red, especially on its backside.

You will notice the meat has turned completely white (or light orange-pink).

The shrimp is done when the tails have curled in on themselves, forming a sort of ‘C’ shape. This usually takes about 2-3 minutes on each side.

Overcooked shrimp will be rubbery, but keep in mind that shrimp will not be very familiar in texture anyway. It’s a very different texture from chicken, turkey or beef, so it may fool you the first time.

Be sure to use a bit of butter when cooking shrimp to give it an extra boost of flavor.

Why Are Sardines So Cheap ? 3 Great Reasons

Why Are Scallops So Expensive ? 3 Reasons You Pay More

Why Is Sushi So Expensive ? Here’s 2 Very Good Reasons

Maki VS Temaki – 4 Differences & How To Tell Them Apart

Lox VS Gravlax – What They Are & How They’re Different

3 Reasons Seafood Is So Expensive