Have you ever had a hankering for sushi, but didn’t go through with it because a really good platter can get really expensive ? Don’t worry, nearly everyone who isn’t a sushi chef thinks sushi is very expensive.

We mean real, authentic, flavorful sushi. We’re not talking about the knock-off ones in supermarkets, those are affordable for most people.

So let’s see why sushi is so expensive ! 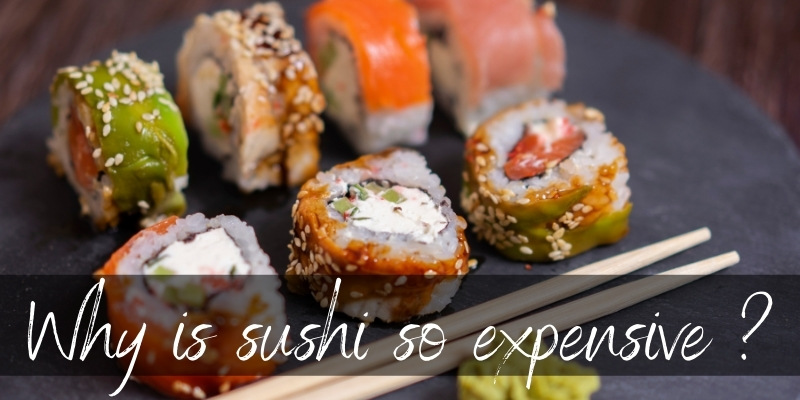 Table Of Content show
1 Why is sushi so expensive ?
1.1 Short history of sushi
2 Sushi requires an amazingly high skill
3 The ingredients in sushi tend to be expensive
3.1 Not just seafood, premium seafood
4 Some sushi types are cheaper, like ura maki
5 Is it cheaper to buy or make sushi ?
6 How long does sushi last ?

Why is sushi so expensive ?

Sushi is expensive because the skill of the chef must be very high to prepare a good roll of sushi. Aside from this, the ingredients in sushi are often premium grade, and sometimes have to be imported.

There’s a real, live person rolling the sushi, preparing the rice and the fish, and finally serving it to you. It’s a very old Japanese food, so expect the chefs to take great pride in their creations.

In fact, knowing the (shortened) history of how sushi came to be will put everything into perspective, and help us understand better.

The sushi we know and love today is derived from an ancient (think Bronze age) dish called narezushi. It was made using fermented rice, and raw fish. The rice would keep the fish intact for weeks or months at a time. In a period when fridges didn’t exist, preserving meat was crucial. The rice in this version wasn’t eaten, only the fish. But that’s how the idea of sushi started.

Over time the dish evolved into vinegar – infused rice, wrapped around thinly sliced raw fish. This removed the need for fermented rice, and the rice could now be eaten as part of the meal.

The addition of vinegar made sure the fish wouldn’t spoil for a few days or a couple of weeks (if properly kept), so sushi became both delicious and convenient.

As time went on, the seaweed sheet became more of a decoration than a necessary wrapping to keep everything contained. So chefs started experimenting, and we wound up with inside-out sushi (uramaki), the California roll, rainbow sushi, salmon sushi, and so on.

Alright, now let’s see why sushi is so expensive. We kind of got a glimpse of it in this history section, and you’ll notice both reasons are very well connected to one another.

When a chef or cook prepares sushi, they need to have several skills, and all of them at a pretty high level. Ranging from handling seafood, preparing the rice, properly rolling and shaping the sushi, adding just enough wasabi, all the way to deciding which flavors go together. 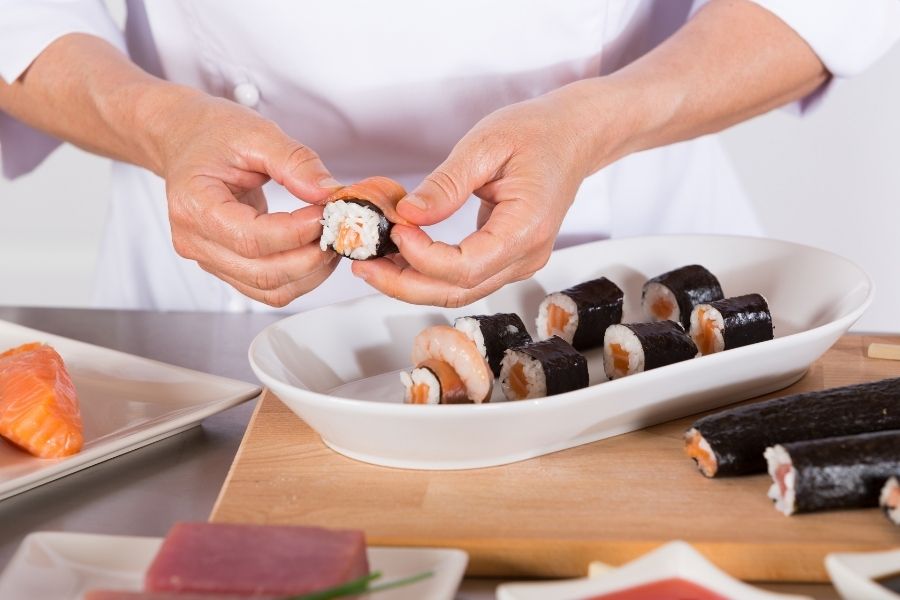 That’s not easy feat, especially when you think that they also need to be very precise, and have amazing knife skills. Have you seen a sushi chef thinly slice fresh salmon ? We couldn’t do more than roughly chop it into cubes, let alone any kind of slices !

But steaming rice just right (yes, it’s different from boiling), then mixing the right amounts of sugar and vinegar into the cooled rice is an art. Bad rice means bad sushi, even if it’s often overlooked.

Proper sushi rice still has each grain intact, but is somehow sticky and not wet, rather it’s moist. The rice makes the roll stick together, and keeps the fish on.

The nori (seaweed) is there to keep the sushi from sticking to the bamboo rolling pads, which by the way are crucial. They’re the main way sushi is shaped.

And yes, uramaki rolls are pretty difficult to make, you’re absolutely right ! In short the chef’s work is pretty much amazing.

The ingredients in sushi tend to be expensive

Skills are one thing, but ingredients are another. A skilled chef can work with any ingredients, but the perfect, delicious sushi roll is only made with high quality ingredients. Just like any other dish out there.

So what goes into or with a sushi roll ? Let’s take a look:

Most of the time the ingredients have to be imported, for a couple of reasons. Outside of Japan, the right type of rice and nori may be hard to find, even in Asian markets.

True wasabi is hard to find, most of the time it’s just horseradish dyed green, or a ‘preparation’ that includes only a bit of wasabi. So, it has to be imported from Japan. Yes, wasabi is a lot like horseradish but it has a slightly different flavor.

The rest of the ingredients (minus the seafood, we’ll talk about that separately) come at a higher price than regular food items, as they’re more of a niche than commonplace.

Ah, the seafood. The love and hate of sushi. Look, good sushi will make you forget you’re eating raw fish, okay ? Unless you have a fish or shellfish allergy, there’s no real reason to be icky about it.

In any case, seafood is pretty expensive to begin with. You know that if you’ve ever even looked at a slab of fresh salmon, or scallops. Shrimp are the most affordable, and you might find some crabmeat in sushi sometimes. 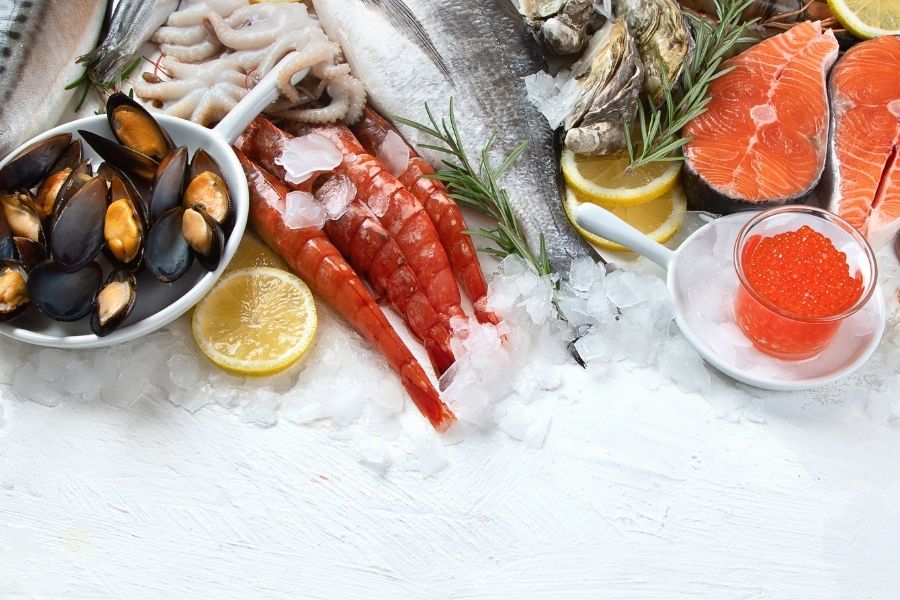 Fresh tuna for example. Deep red (much like beef), tastes slightly sweet and very meaty. Fresh salmon, also amazing and almost as expensive as tuna. Mackerel, halibut, squid, sea urchin, freshwater eel, jellyfish (yes !), albacore are all options for sushi that may both intrigue and repel you.

Of course, the more ‘exotic’ types like jellyfish or sea urchin may cost a little more, because they need to be prepared very well and take more skill.

For example the maki (regular, seaweed on the outside rolls) made with cucumber, avocado, or cream cheese will be the cheapest. The same type, made with tuna and avocado will be pricier.

The uramaki, with the nori inside, will be more expensive. It always has a delicious meat like tuna, salmon, or mackerel on the inside, requires more skill, and has some nice toppings like roe or sesame on top.

Then there’s the nigiri. The most basic, but cleanest in terms of flavor. It’s just rice, the smallest dab of wasabi, and meat on top. The meat is put kind of like a thin blanket on top of the rice.

This sushi is all about each individual flavor, so only the best ingredients are used. There’s no sesame or cream cheese to hide a bad shrimp flavor, so the chef has to know what they’re doing.

Is it cheaper to buy or make sushi ?

In terms of money it’s definitely cheaper to make your own sushi. In that the ingredients may be more expensive but you can make entire batches of sushi. And when you divide them by serving, the cost of each roll is smaller than store-bought rolls.

However. You most probably don’t have the skill to make sushi, most people don’t. So the overall quality of your sushi will be lacking, compared to one made by a chef.

It can be very good practice if you absolutely adore sushi and want to make your own. After all, the chefs had to learn to make them, so you can learn too. There’s tutorials all over the internet on how to make each type of sushi, what kind of ingredients to use, how much to use, and so on.

So in short, it’s a mixed bag. You get cheaper sushi at home, but you need to develop some serious skill and get quality ingredients to eat really good sushi.

How long does sushi last ?

Raw fish sushi is good for about 24 hours, while cooked seafood sushi will only keep for 3-4 days. Now, if you’re making your own sushi you should know that the vinegar in sushi rice is meant to protect the fish from going bad. This means that sushi with fish on the inside will keep longer, because the fish won’t spoil very easily.

That being said, it’s always a good idea to eat sushi immediately after you’re dome making it. The fish will start to lose flavor otherwise.

If you’ve made way too much and need to store it, then be absolutely sure to use an airtight container. Wrap it in clingfilm if you have to, but make sure it’s airtight. Keep it in the far back of the fridge, just don’t touch the back panel or it will freeze.

As for the store-bought sushi rolls, you should check the ‘best by’ date. It’s usually a 2 week period but we strongly recommend you eat the sushi much sooner than that. Always keep the sushi in the fridge, whether it’s fresh or leftover !