Looking for alternatives to cashew paste ? You’re in the right place. This product is useful in so many ways it’s bout to have a few alternatives that are easy to find or make.

Let’s get to them, and see all the different types of substitutes there are. 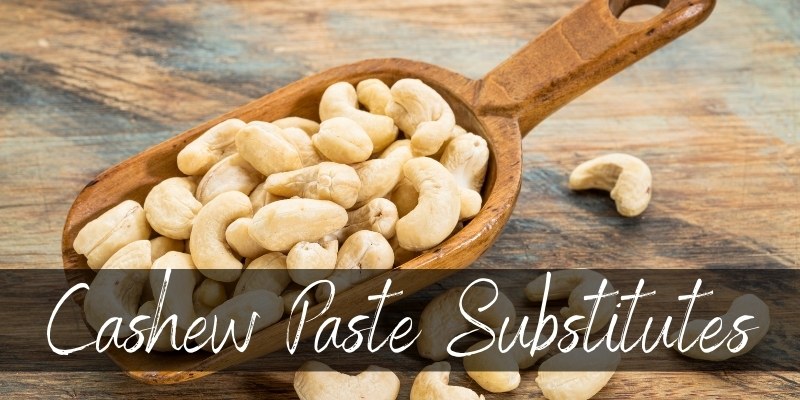 The best cashew paste substitutes are those that are also high in fat and can provide a creamy texture. Examples are hazelnut paste, almond paste, pine nut paste, tahini, sunflower seed paste, poppy seed paste. If you’re open to using dairy, you can use cream cheese, strained yoghurt, heavy cream, or sour cream.

If you’re not looking for a cashew alternative due to an allergy, why not replace cashew paste with that of a different type of nut? You’ll get that same wonderful, warm flavor provided by nuts as well as a new spin on your old favorite!

If you’re looking for an exciting, rich replacement for cashew paste, you might want to try hazelnut paste! We love this alternative for anyone looking to add a unique, earthy flavor to their dish.

Similar to cashew paste, hazelnut paste will provide that same luscious texture and nutty aroma, with that added pop of husky, hearty hazelnut. That being said, if you’re not looking to add this distinct flavor to your dish, hazelnut paste (and no, we don’t mean Nutella) may not be the alternative for you. 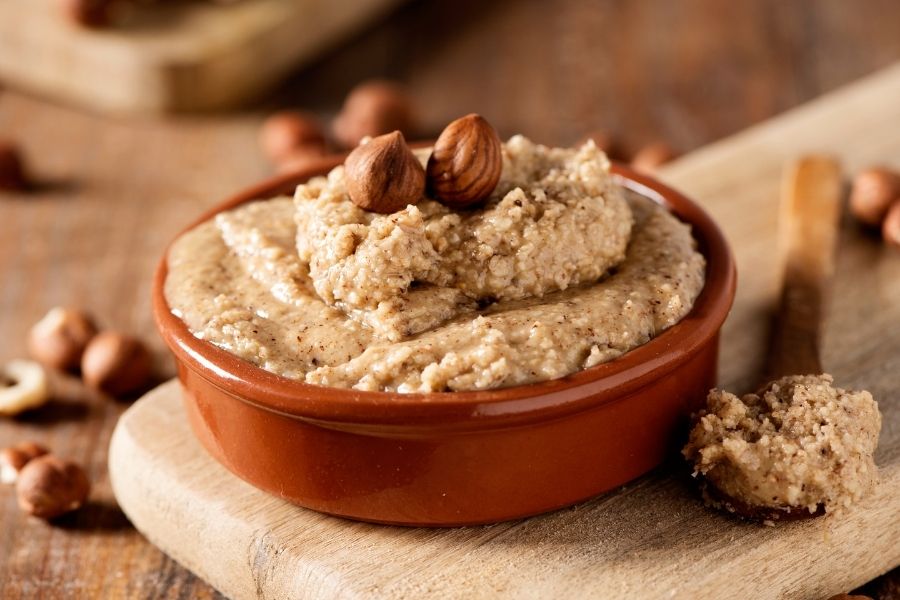 Due to pine nuts – or pignoli – high oil content, pine nut paste will be very, very creamy! You may not even need as much as you would of cashew paste, though cashews are also high in natural oils.

If you’re planning on using pine nut paste as a substitute, keep in mind that pine nuts have a very strong, distinctive flavor and scent. They are quite delicious – actually tasting a bit woody and yes, piney on their own – but if you aren’t very careful with your measuring, pine nut paste may end up overpowering your entire dish.

If you’re looking to make a meal that maintains its own flavors that simply don’t want to be outshined by this small, corn kernel-shaped tree nut, pine nut paste may not be the alternative for you.

If the above scenario pertains to you, you may want to almond paste as your cashew substitute. Although, when almonds are crushed, they do release a much stronger flavor than in their whole form, almond paste is certainly not as forest-flavored as pine nut paste.

Almond paste – also known as marzipan – will provide your dish with that same creamy, rustic texture received from cashew paste, with a slightly different nutty aroma. And, if you purchase almond paste from the store, it will most likely contain sugar, adding a hint of sweetness to your dish! If you’d like to smash up your own almonds to make a sugarless paste, you can certainly do that, too!

If you or a family member is allergic to nuts and/or dairy, you may like to choose a seed-based alternative. Just like nuts, seeds are vegan, gluten free, and quite nutty in flavor! Plus, in paste form, they will provide the same thick, smooth texture as cashew paste!

Also (sort of mistakenly) referred to as tahini, sesame seed paste is quite popular in dishes like savory hummus and sweet halva from the Middle East and the Mediterranean region! 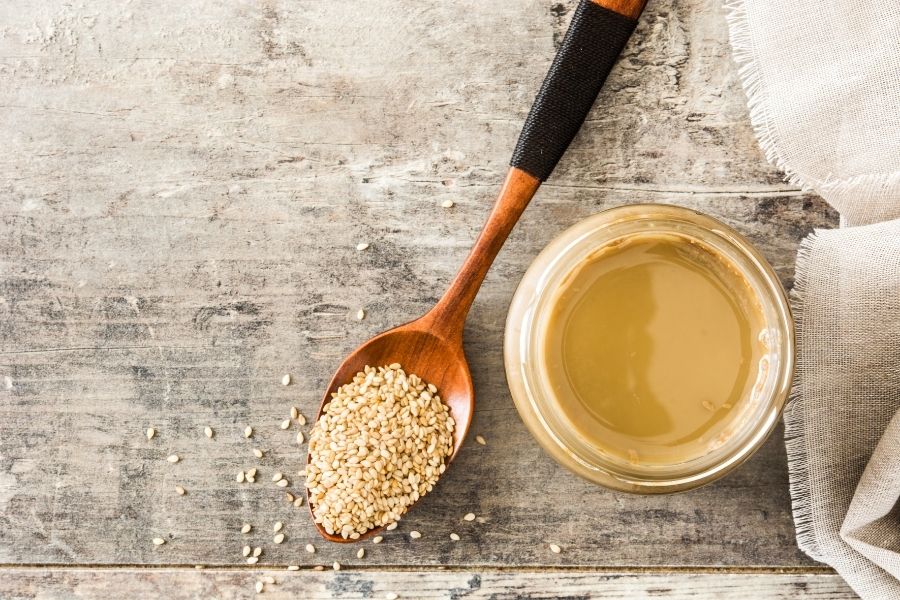 That being said, either can be used to replace cashew paste in a dish! If you’d like a thicker texture, go with the sesame seed paste. If you’re looking for a nuttier, tangy flavor with a bit more smoothness to it, try tahini (as long as it isn’t tahini sauce, which may contain extra ingredients like garlic or lemon juice).

Shockingly similar to peanuts in texture and flavor when buttered, sunflower seeds are soft, nutty seeds that should be a lot more popular than they are. Just like pine nuts, they have a great deal of natural oil, so the paste they make is nice and creamy!

Sunflower seed paste would make an excellent cashew paste alternative for all of these reasons! Just make sure you don’t accidentally buy sunflower seed butter; though it tastes delicious, it tends to contain sugar, which could throw off the flavors in your dish, especially if it’s meant to be entirely savory.

If you’re looking for a unique, colorful option to replace cashew paste, poppy seed paste may be the option for you! It’s consistency is quite similar to cashew paste, so no problems there! Plus, it has a slight nutty, woody flavor!

The only thing is that cashews tend to be naturally sweet and strong, whereas poppy seeds are quite plain, so make sure your dish is not centered around that full-bodied nutty taste if you’re planning on using poppy seed paste.

And of course, we have to talk about the elephant in the room! Poppy seeds – and hence, poppy seed pastes – are a navy blue color! So, if you want to add a beautiful, rich dark blue to your dish (especially a sweet treat or a bun filling), poppy seed paste is an excellent cashew alternative!

As long as you can substitute dairy for cashew paste, why not substitute cashew paste for dairy, right? Dairy products are commonly used in sweet and savory dishes as a thickening agent, so there’s absolutely nothing wrong with throwin’ in back to the tried and true classic.

The only things to watch out for when using dairy products as cashew paste alternatives are curdling and, of course, allergies or intolerances. When heating dairy products, you must make sure not to over boil them, as they will most likely curdle and become useless to your cooking needs.

And, if you are lactose intolerant (like 65% of the world’s population) or allergic to dairy, we do not suggest putting your body through that torture when there’s other alternatives listed above.

Depending on what you’re looking for, cream cheese could be an amazing replacement for cashew paste. It works best in dishes that are meant to be served cold, because you can’t really heat cream cheese.

It provides a creamy texture and a nice tangy flavor that pairs well with extra flavorful ingredients like curries. That being said, you can mix cream cheese into a warm sauce, and it will still be good.

If you’re looking for a cashew paste substitute that will provide the ultimate rich and creamy experience, look no further than heavy cream. This high fat, decadent ingredient is sure to make any dish irresistible.

The only thing to think about is flavor. Heavy cream doesn’t provide much flavor besides the telltale cream taste. So, if you need a cashew paste substitute that maintains a nutty note, heavy cream may not be the best option.

Another full bodied alternative can be found in the form of sour cream. Unlike its heavy cream cousin, sour cream will provide your dish with a pop of flavor. Sour cream is basically fermented milk, so you’ll get that wonderful, zingy note in your dish if you decide to use it as a cashew paste substitute.

However, similar to heavy cream, sour cream will not give that nice nutty flavor to your dish, so we suggest a different alternative if this is the flavor profile you need.

To wrap up the dairy-based cashew paste alternative section, we’ve chosen yogurt. Now, of course, you’re going to want to go for plain, unsweetened yogurt (regular or Greek, depending on your flavor preference), unless you specifically want a sweet or fruity flavor added to your dish. 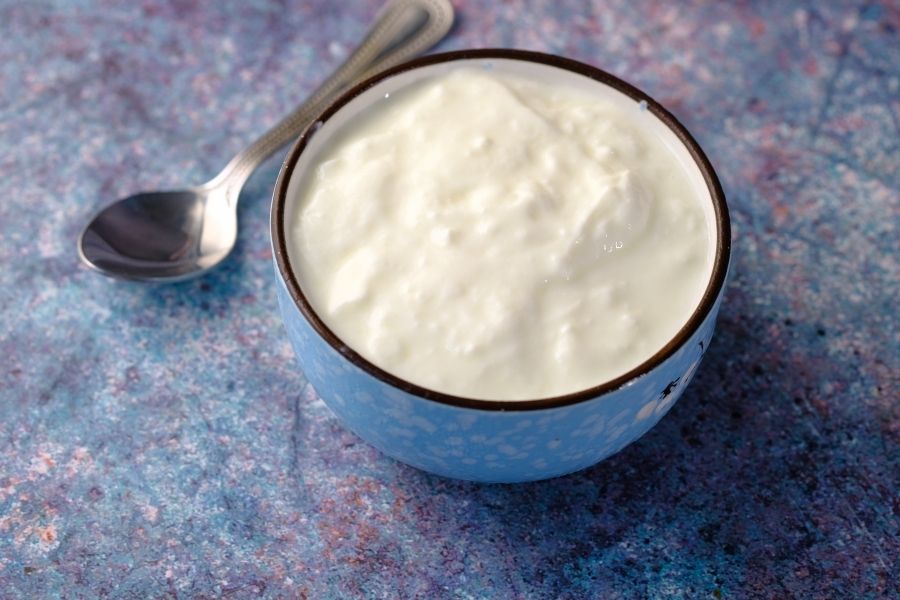 If you want that same nutty flavor, you could even vie for cashew-based yogurt! Just make sure not to add too much, as the consistency of yogurt, like its other dairy friends, is more viscous than cashew paste; you don’t want to make your dish too watery!

To top it off, we wanted to give you one more alternative to cashew paste that everyone will have in their cupboard! Are you excited to find out what it is? If so, just look down!

Yes! You can actually use that cornstarch you’ve had in your cabinet forever! Unless you have a pre-teen who loves making homemade slime, chances are, you rarely get to use your cornstarch. Even if you use it all the time, you probably still have a lot left since recipes never call for more than a tablespoon of this stuff!

Cornstarch is a thickening agent, which makes it a great cashew paste alternative! It has virtually no flavor, won’t break the bank, and it has a slew of other uses we bet you didn’t even know about, such as making firm pie crusts, perfect waffles, and even replacing eggs in many baked goods!

The only thing to think about with cornstarch is the taste. As we mentioned, it really doesn’t have one. So if your dish depends on that nutty flavor provided by cashew paste, try one of the nut or seed alternatives above!

Read Also:How To Store Tamarind Paste So It Lasts Longer

What is cashew paste used for?

For the most part, you’ll see cashew paste used in many Indian dishes, such as creamy cashew chicken, Indian Butter Chicken, and even traditional 7 Cup Burfi (also known as 7 Cup Cake)! To all of these dishes, cashew paste adds a wonderfully nutty, fragrant, and slightly sweet taste as well as a creamy, rustic texture!

But, in recent times, as vegetarianism and veganism have become increasingly popular, you may have found cashew paste used as a substitute itself, mostly for dairy products such as heavy cream! Again, it offers a luscious texture to cream-less vegan dishes, as well as a nice nutty profile that heavy cream simply can’t accomplish!

There are a lot of great substitutes for cashew paste but it really depends on what you plan to do with it. I hope the list I gave you helped you find at least one alternative that works in your situation.