Arugula and dandelions are two very similar-looking leaves, to the point where people often wonder if they’re not the same thing. Both are very common and both are actually very old plants, dating back to pre-Roman empire era.

So let’s take a look at dandelion greens and arugula leaves, see what their main differences are and whether you can use one in place of the other. 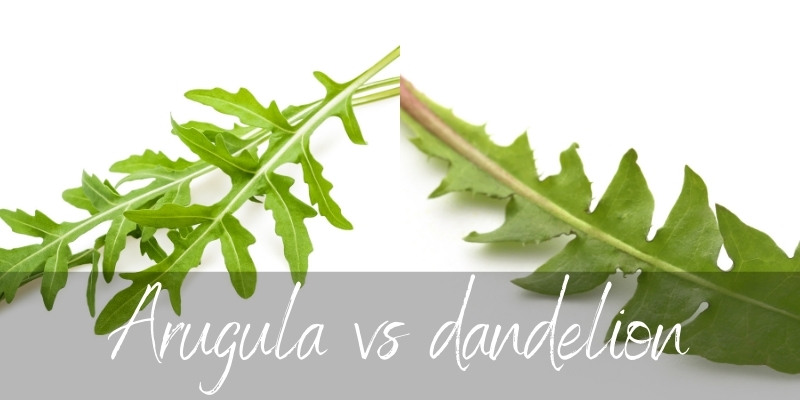 Table Of Content show
1 Arugula vs dandelion
1.1 Arugula is related to cabbage and asparagus
1.2 Dandelions are related to chicory and daisies
2 Can you eat dandelion leaves ?
2.1 Is wild dandelion safe ?
3 Can you substitute arugula for dandelion ?
4 What do arugula and dandelion go with ?

Dandelion leaves are sharp, and have long leaves with triangular sections that stick out like jagged teeth. Arugula leaves have longer, rounded ‘fingers’ and fewer sections, and are usually smaller-looking than dandelion.

Arugula and dandelion are two different plants, despite looking similar. Let’s take a look at their respective families to learn more about them.

Arugula is related to cabbage and asparagus

Arugula is more closely related to the Brassicaceae family than to dandelions. This means it’s related to cabbage, asparagus, broccoli, and even Brussel sprouts and yellow mustard !

This is the main reason arugula tastes the way it does: it’s pungent, mildly peppery, with a slight bitter undertone. This is common across all Brassicaceae family members, some showing it more prominently, like pungent mustard or deeply-sulfurous cabbage.

Overall, arugula is a well-balanced leaf but it can seem too bitter or too strong tasting for some. It may be especially unpleasant for people who can’t stand bitter foods.

Dandelions are related to chicory and daisies

Dandelions are not the same family as arugula, in fact the only thing they have in common is the fact that their plants eventually produce flowers. The resemblance to arugula leaves is mostly coincidental, and once you look at both leaves compared you’ll easily tell them apart.

In fact, dandelions are related to chicory plants, daisies, and sunflowers, and they all have in common the fact that they’re not just one flower. No, they’re a composite flower, meaning tiny little flowers all bunched together into what we see as a single flower head. 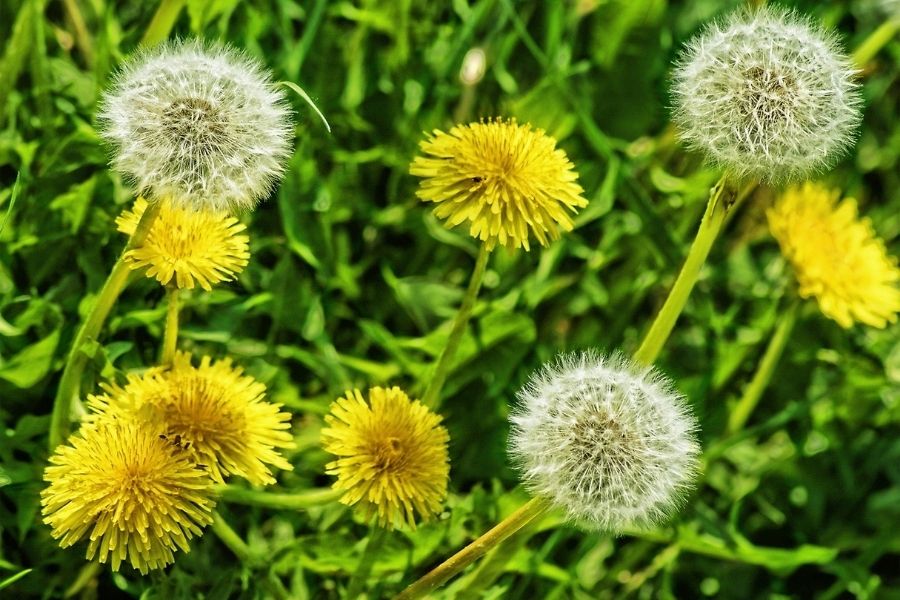 Can you eat dandelion leaves ?

Yes, you can eat dandelion leaves, as well as the stem and the flower head. The leaves taste a bit more bitter than arugula, while he stems and the flowers themselves are very grassy in flavor.

You can easily find dandelion flowers use din tea, mostly for their use in easing gastric issues and promoting healthy bile production.

Look for young, tender dandelions. You’ll mostly want their leaves, but try and leave 1 or two on the plant to it can continue growing on its own.

A word of caution: wild dandelions are wild flowers. As such they may have different insects living in or on them, and they may have been peed on by wild animals. While the dandelion itself is safe, we do not know what else came in contact with it. If it’s a random dandelion growing in your backyard it’s probably safe.

Can you substitute arugula for dandelion ?

Yes, you can use arugula in place of dandelion or dandelions in place of arugula. You will have to understand there is a slight difference in flavor, with dandelion leaves being a bit more bitter than arugula. Still you can swap them in a salad, soup, or throw them in with the spinach.

What do arugula and dandelion go with ?

Both arugula and dandelion go well with starchy foods like potatoes, rice, used as a pizza topping right after it’s baked. You may add them to a freshly made tomato sauce, but be sure to chop them finely before adding them.

We’re assuming you can throw in some arugula if you’re making home-made pesto, or completely swap the basil for arugula or dandelion or both.

A common place you’ll find arugula is in a salad, along with dandelion leaves and other leafy greens, such as lettuce or endives. Or, you may find them as the ‘greens’ in a simple sandwich.

Of course, these two leaves go well with nearly every meat or cheese you can throw into a sandwich, like pulled pork, leftover turkey, thinly sliced beef, prosciutto, bacon, what have you.

One of our favorites is a simple, savory bagel (sesame !) with cream cheese, arugula, and a bunch of different cheeses, like Emmental and sharp Cheddar, or Gouda and Parmesan.

If you ever decide to make a grilled cheese sandwich with arugula or dandelion, we recommend chopping them very finely. Like spinach, these things wild when subjected to heat, and they just look bad, all wilted and long. So, it’s better to have them chopped, the smaller the better. This way they’ll easily mix into the oozing cheese and you’ll get some in every bite.

And that’s pretty much it about arugula and dandelion. These are two similar-looking leaves and they also taste similarly good. If you’re looking for which is best, in our opinion arugula is better because it has a more delicate, complex flavor than dandelion.