Endives and escarole come from the same family of leafy greens – and are often mistaken for each other. These slightly bitter-flavored veggies are popular winter or spring salads, or a lovely addition to soups.

If you’ve found yourself wondering what’s the exact difference between the two, we’ve got you covered. 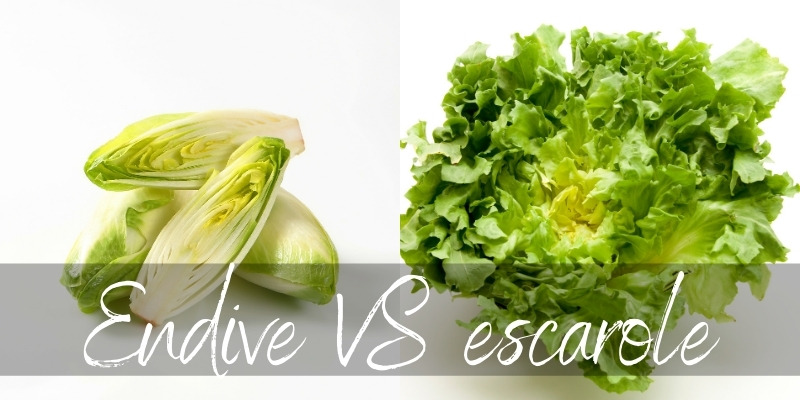 Endive is marked by finely cut, narrow, curly leaves, whereas escarole features smooth, broad, rounded leaves. The branch-like leaves for endives are quite frizzy, while escarole leaves resemble that of curly-leaf lettuce.

Endive or frisee doesn’t quite hold up to cooking like escarole and is best used raw in salads with salty cheese, bacon, or poached eggs.

Escarole is so similar to lettuce that it’s often bunched and placed on racks with heads of fresh lettuce, far from its close relatives endive and radicchio. A must-mention here is that escarole is usually less bitter than endive.

How to tell endive and escarole apart

Endive, or curly endive, or Belgian endive is more commonly denoted by the family name ‘chicory’ – and it’s a loose-headed plant. The leaves for this variety sport a light-green hue in the center which gradually turns into a darker green for the outer leaves. The inner leaves are taste mild, while the outside leaves are more bitter.

Endives usually come with a bit of a prickly texture, which turns slightly more tough as the weather warms. Some curly endive features a blanched creamy yellow tone, marked by flattened leaves due to blanching with a shingle or board. It’s marketed as riccia or frisée, the Italian and French names for curly endive respectively.

Escarole is more commonly called as batavia, Batavian endive, or broad-leafed endive – and it forms a flattened head. The leaves are more creamy yellow towards the center, but turn to light to dark green on the slightly ruffled ends.

Taste difference between escarole and endive

As compared to curly endives, escarole is somewhat tender and milder when it comes to the taste. It’s marked by a little more versatility and a pleasant bitterness. The latter comes with a fresh, vegetal taste that makes it different from curly endives and many other chicories.

The degrees of bitterness may vary throughout the head of the leaves for both, but escarole experiences a milder increase.

Whether it’s endive or escarole, the flavor for both of them is brighter and a lot more pronounced in the raw form, while turning mellower on cooking. The bitter tastes for both the greens can be nicely paired with strong salty and sweet flavors.

Differences in use and preparation

Endive as well as escarole can be savored raw or cooked, but most people prefer going for escarole more when it comes to grilling, saute, or braising.

Endive is a versatile leafy green that works best when integrated into salads, appetizers or even the main dishes. Curly endive is widely served raw with a vinaigrette charmed up with mustard, shallots, or garlic flavors. 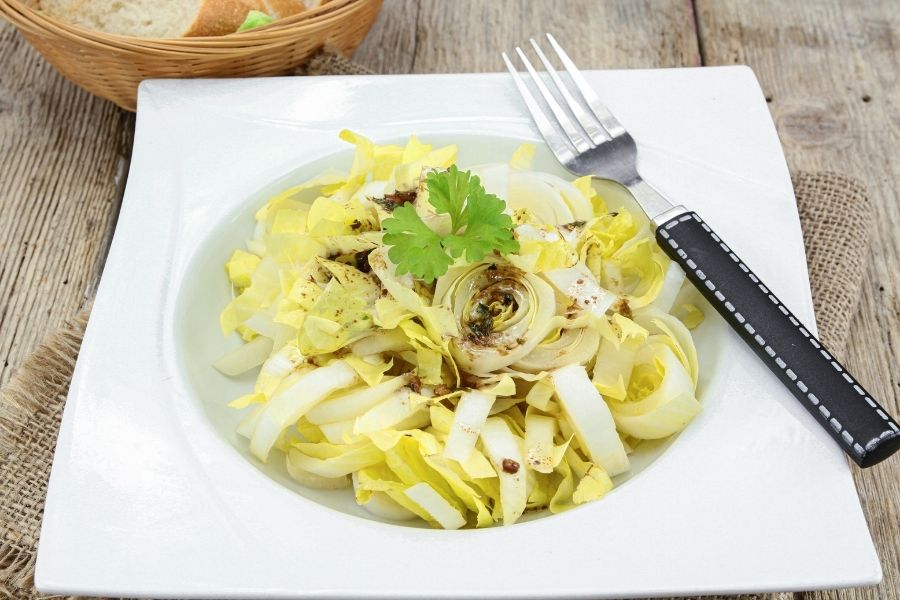 If the endive leaves are at all bitter or tougher, it is served cooked in vegetable ragouts or soups. At the same time, endive is also used in its baked, stuffed and sauteed forms.

Frisée aux Lardons is an amazing traditional dish that has frisée itself as the chief element, instead of simply working as a side treat. Endive leaves make a wonderful garnish on poached eggs.

Like other chicories, escarole is popular in Italian cuisine and has a more traditional use in salad. It ends up in a tasty and attractive salad base when mixed with other greens.

Another popular preparation method is to wrap fish or meat in escarole leaves before cooking them. Escarole can be boiled as a side dish to complement meat or seafood. It also adds an extra touch of flavor and texture to pasta dishes preparations.

Escarole has also got different preparation options for different seasons. To explain better, chefs love to add tomatoes, mustard or shallots to it during spring, while combining the leafy goodness with raisins and nuts in the winter.

The darker outer leaves are pleasantly chewy, which is the factor that takes the credit for making them ideal for cooking. The raw leaves can also be dressed with a creamy dip or garlicky vinaigrette.

An example of escarole clearly preferred over endives is soups. Escarole takes a quite mild flavor after it’s cooked. Tear it into smaller pieces and add to soups, such as white bean stew or minestrone. 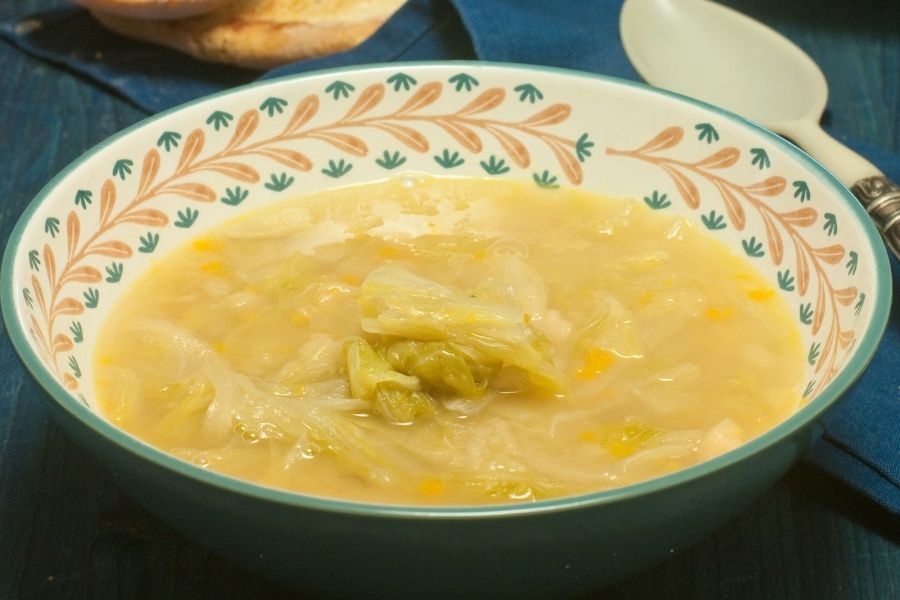 Similarities between escarole and endive

Apart from the uses of endive and escarole stated above, there are a few more things that make them quite similar. Both the leafy greens have the same peak season, i.e. winter through early spring.

The fact that they are from the same family and often confused with one another makes most stores use very clear labels for each. In fact, some also use signs to let the customers know of the differences in their taste and uses, while they are placed near other salad vegetables.

Both endive and escarole require to be kept cool and in a well-ventilated environment. Both must not be stacked more than two together, while also keeping away from heat.

Speaking of the shelf-life, both stay fresh and crisp for around 5 days, and shouldn’t be washed until you’re ready to prepare and eat them. Washing them with water before will only encourage deterioration.

Both the veggies should be consumed soon as they are likely to lose crispness the longer they are stored. Especially if you plan to serve them raw, make sure to use the leafy greens as soon as possible for the best flavors.

In the cooked form, endive and escarole will last in the fridge when put in an airtight container for up to 3 days. Freezing them is not recommended as this only breaks down the delicate endive or escarole leaves.

Can you substitute endives for escarole ?

The answer is yes! While there are a few differences and a few similarities between endive and escarole, if you plan to prepare a dish with one of them but can’t find it in the stores, you can always replace it with another.

Speaking of the taste and texture, the final dish will have only slight differences when substituting endive for escarole and vice-versa. However, in terms of appearance, one will easily differentiate between the two looking at the served dish.

Many people often find themselves confused when it comes to classifying escarole as endive or lettuce. But taking a look at the above study, we can say that technically, escarole is a flat-leafed variety of endive.

Both the leafy greens share so many similarities yet many differences that make them unique in their own ways.