Do you absolutely love rice ? Then you’re probably trying out fried rice, since it’s one of the clearest example of how versatile rice is. You can get is sweet or savory, and you can have it as a side-dish or as a main meal.

So what is the difference between fried rice and white rice ? Is one better than the other ? And if yes, why is it ? Is there something you should always be aware of when ordering rice from a menu ? Let’s find out. 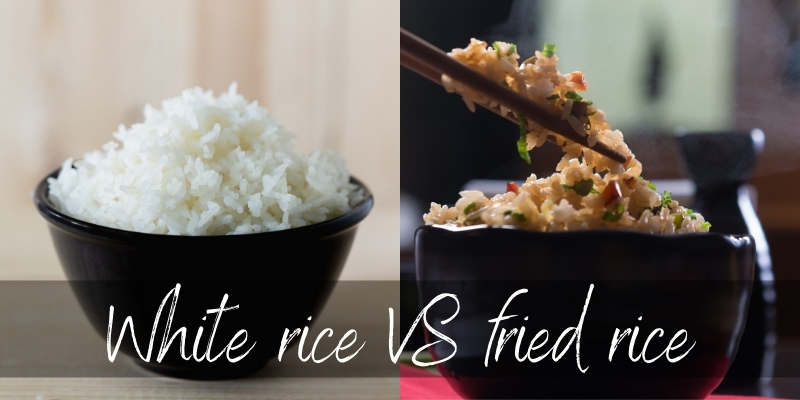 Fried rice is simply the done-up version or white rice. Day-old white rice is lightly fried in a wok with soy sauce, vegetables and meal, and egg, and served as a meal in and of itself.

One thing you can count on, white rice is always fresh, a couple of hours old at most. It needs to be hot and ready to serve for each meal for customers.

In short, the difference between white rice and fried rice is so big they’re a bit hard to compare. Still, we’ve compiled a list of their key points and how they’re different from each other. Know that each of these rice versions are great in their own way, so you shouldn’t discount one simply because it’s used in a different way. Let’s begin.

If you’re in an Asian food restaurant chances are the meal itself will be very flavorful, and not just from the soy sauce. For example the spicy and delicious Thai peanut chicken draws its flavors from the peanut sauce and garlic and chili. Or even the tamer Japanese dishes that offer a deeper flavor still need something plain and simple to go with them. 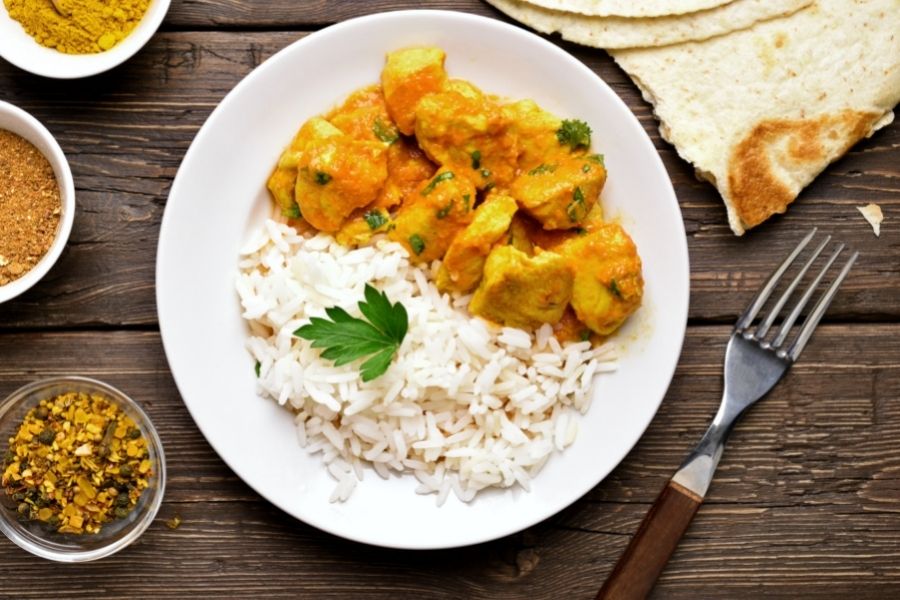 White rice is just the thing. It absorbs the sauces very well, and it’s very easy to make in large batches to feed an entire table. It’s simple and it does not compete with the other flavors. You’ll rarely see rice cooked as anything but a simple steamed version.

Fried rice is not a recent invention, it’s actually a very old way of using up leftover white rice. It’s flavored in many ways, and each family or region or country has its own unique style of cooking fried rice. This results in a multitude of delicious options whenever you’re at a restaurant with a specific regional profile.

Usually fried rice is rice, soy sauce, meat, vegetables, and thinly sliced omelette. It’s a meal by itself and it’s very filling ! One thing we’ve noticed though, you can buy a very plain version of fried rice as a side-dish in many Chinese takeout places or in mall food courts.

It’s usually a less seasoned version of the original fried rice, often having just a few veggies like peas and carrots. This results in a more flavorful rice, but it will not allow the other flavors of the main dish to shine.

Fried rice is an easy to make comfort food

A beautiful note we’ve noticed about fried rice: it’s a comfort food. The same way stew and pizza simply know what you need and give it to you, so does fried rice. It’s hot, it’s filling, it’s got all the right flavors, and it looks great too. It’s the kind of food that you can eat in bed white watchin you favorite show.

It’s also very easy to make, which is part of its charm. We personally have fried rice a couple of times a month when we feel like making a very simple but delicious meal that does not take long to put together.

White rice is simply steamed white rice, be it long grain or round or medium. It really depends on what region the food you’re eating is from. For example for Japanese food it’s always sushi rice, as that’s the rice they always use in their meals. In Thai food it’s jasmine rice, and in Indian food it’s almost always basmati.

The whole point of white rice is to be simple, plain, and be a side-dish. Not draw attention. It does its job beautifully, providing you with a neutral flavor but lots of texture. so that the other flavors of the main dish may shine upon it.

Day-old white rice is the basis of fried rice

You cannot make fried rice with anything but day-old rice. The problem is the moisture in freshly steamed white rice. It needs to stiffen and lose some moisture and be very cold when it hits the hot wok.

You may be wondering if you can’t simply use less water in steamed rice and use that instead. No, and here’s why. When you use less water the very core of the rice will be undercooked, which you will feel when eating the rice.

By steaming the rice completely and then letting it sit until the following day, it will lose moisture all over. This means the very core will still be cooked and edible and soft, while the outer part will start to dry. It’s a very different texture than undercooked rice and it cannot be replicated.

So one of the biggest difference between white rice and fried rice is how they’re used and made. Whenever you’ve got too much white rice, you can simply make fried rice the following day.

Fried rice has much more calories than white rice

You’ve probably heard that fried rice isn’t good for you. Well, let’s see why people say that. First it’s the fact that fried rice has all these extra calories from the cooking oil, which really add up. Oil and fats (9 kcal) have the highest calories per gram as opposed to protein (5 kcal).

So if you’re on a quest to reduce fat and lose weight, fried rice is not the way to go.

White rice is much lower in sodium, so this will help if you’re trying to keep your salt intake low. Of course Asian food is not known for being low in sodium, but you can easily find soy sauce that is low in sodium and use that.

In short, white rice has its own calories but fried rice is pretty much double. The majority of the calories come from the carbohydrates that both fried and white rice have. The problem is that fried rice pairs them with cooking oil, which adds more calories.

Is fried rice supposed to be crunchy ?

Fried rice can be a little crunchy yes, but it rarely turns out like that. Especially if you make it at home and don’t have a wok, getting crunchy rice is not feasible. You’re likely to crowd the pan, which will steam the rice and it won’t really have time to crisp up after you add the soy sauce.

There’s also a very big difference between making fried rice from steamed rice and from boiled rice. In short, the boiled rice will always have more moisture and end up a little mushy, compared to the steamed rice.

In short fried rice is a meal of its own, and definitely something you can easily fill up on. White rice is more of a side-dish to be used alongside very flavorful dishes.