Whenever you’re baking cupcakes you’re praying they come out perfect. Sometimes they do, sometimes they don’t. Unless you’re an experienced baker, you likely won’t know what went wrong with the cupcakes. You followed the recipe, set the timer, preheated the oven, and they still came out wrong.

You may be asking yourself ‘why are my cupcakes so dry ?’, and even ‘why are my cupcakes so dense ?’, and those are common problems. To be fair, baking is both a science and an art. Each oven is different and the ingredients will always differ slightly. Don’t be too hard on yourself, it takes a lot of practice. So let’s see why cupcakes can turn out dry, and why they come out dense. 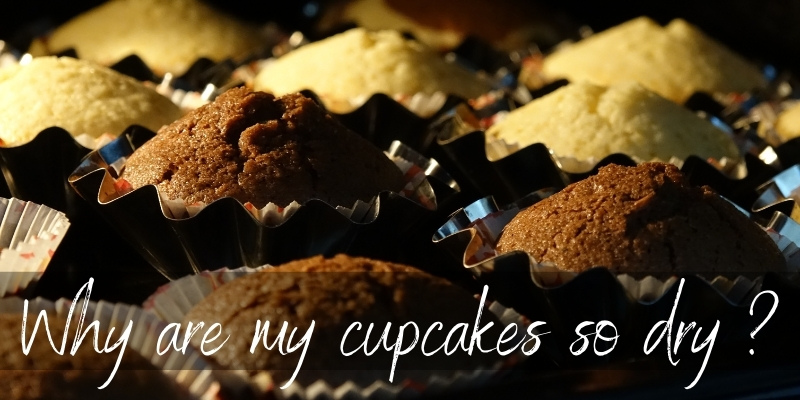 Table Of Content show
1 Why are my cupcakes so dry ?
1.1 Gluten-free recipes tend to come out dry
2 How to fix dry cupcakes
2.1 Add moisture with simple syrup
2.2 Add moisture with milk
2.3 Serve it with cream
2.4 Use a very fluffy, light frosting
3 How to make sure your cupcakes are moist
3.1 Be sure to add enough eggs
3.2 Add milk, oil, butter
3.3 Add fruit juice
3.4 Bake at 180 C/356 F and do the toothpick test
4 Why are my cupcakes so dense ?
4.1 Too much flour or dry ingredients
4.2 Too little leavening agent

Why are my cupcakes so dry ?

Cupcakes are likely to be dry if there isn’t enough moisture in the recipe, such as milk or butter, or oil, and if there are too much of dry ingredients, such as flour. You can also get dry cupcakes if you bake them too long, or at a temperature that’s too high.

The main problem behind all of this is that the gluten bonds can’t hold everything together, because they need a bit of moisture to form. If your recipe is too dry it may not form properly.

If you’re using gluten-free flour you have a higher chance of getting a dry cupcake. This is usually the case when you take a regular recipe and swap the flour for gluten-free. You have to account for one bonding agent that is missing.

So you will often have to add an extra egg, or aquafaba, or another element that will help the cupcake batter stick together when it’s done baking. And if you do not add enough moisture, be it through eggs, milk, butter, or oil, you will get a dry and crumbly cupcake.

How to fix dry cupcakes

Fortunately there are ways to fix dry cupcakes. You can’t unbake them and start over, but you can use a few of these tricks to help you out. All of these refer to cupcakes that are already baked. In the next section we’ll deal with how to ensure we don’t get them dry before baking.

This is probably the easiest way of adding moisture, and it involves simple syrup. We recommend using less than you’d initially think, letting the cupcakes sit for about 10 minutes, and the checking if they need more syrup. 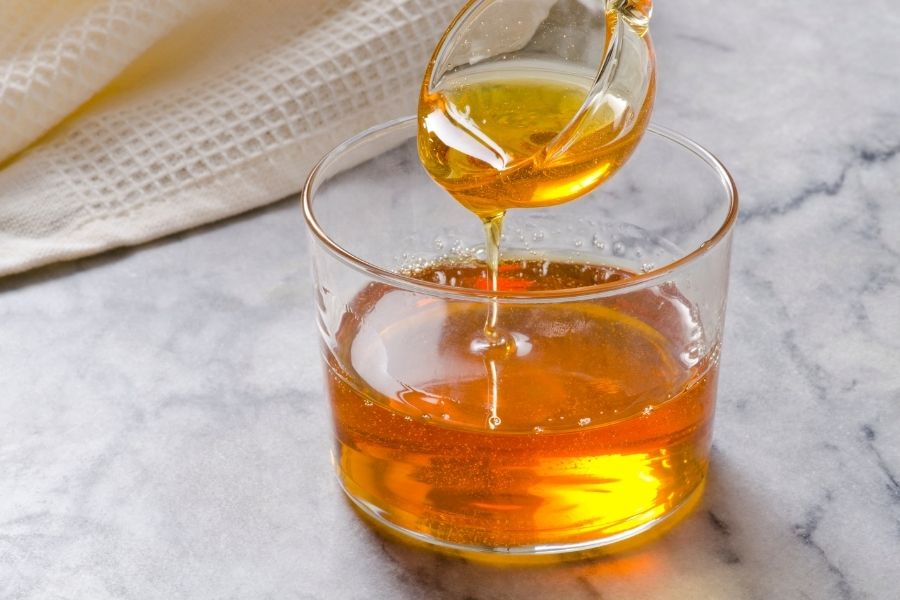 To make simple syrup you need equal parts sugar and water, and bring them to a boil. Let them simmer for about 3 minutes or less, until all the sugar has dissolved. You can also flavor your syrup with whatever you like.

Get a fork and poke the top of the cupcake, to create little channels into it. Just a couple of pokes are enough. Take a teaspoon and gently drizzle cold simple syrup onto the cupcake. The channels will bring the syrup to the middle part, and it will end up at the bottom as well.

You’ll notice the cake is sucking up the syrup, and you may panic, thinking you’ve got such a dry cupcake. Don’t fret, this happens even with moist cakes. Simply add a few teaspoons to all of them, then let them sit to absorb that moisture. Don’t throw the syrup away, you’re coming back in 10-15 minutes to check on them. If they seem dry, add more.

Another option is to use milk, just like you would for a tres leches cake. The milk can be plain, or flavored, and it can be previously-boiled or perfectly cold. If it’s fresh, raw milk we recommend you boil it first and let it cool. You have less chance of bacteria spreading.

Again, use a fork to create channels into the cupcakes, add milk with teaspoon, let sit for a few minutes, then come back to check on them.

If you decide to use milk for moisture know that the cupcakes should be eaten within 48 hours, and always kept in the fridge. Milk is notorious for spoiling quickly, and it can make your cupcakes go bad much faster. 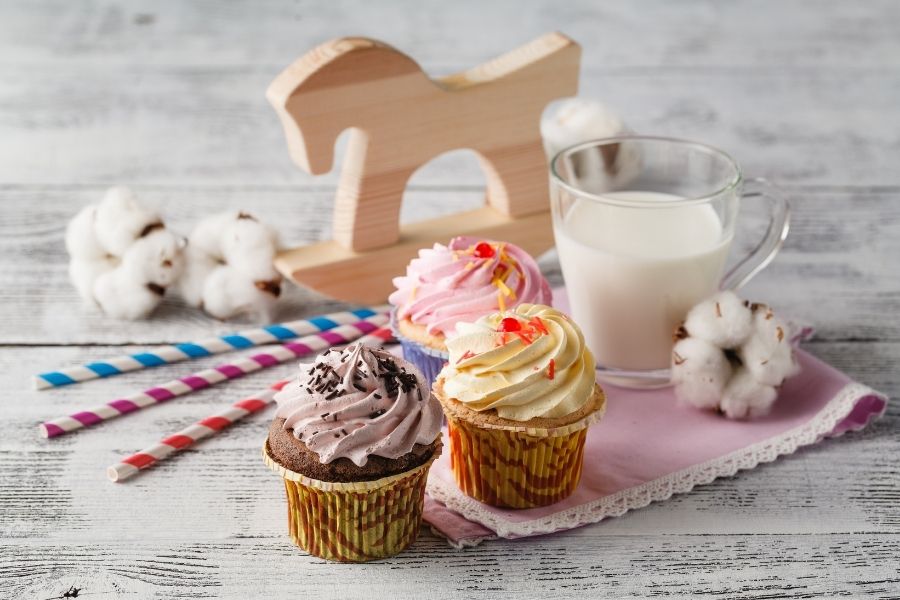 Serve it with cream

You can also serve the cupcakes with a side of cream, be it lightly whipped cream, plain cream, or even ice cream. You can do this with cupcakes that have been moistened or left as-is, it works for both.

Use a very fluffy, light frosting

The frosting you use will matter a lot when dealing with dry cupcakes. No matter what kind you use, be sure to cover all of the cupcake, leave no part of it open to the air, as it will dry faster.

Ganache can be too dense for a dry cupcake, and will only contribute to the dry feeling.

How to make sure your cupcakes are moist

Alright, what can you do to make sure your cupcakes aren’t dry from the get-go ? The main problem is the wet-to-dry ingredients ratio. It’s always better to go for a higher wet ingredient ratio if possible. In a worst case scenario the cake will cook slower, and you can simply turn down the heat a little to make sure it doesn’t burn on the sides.

The texture of the mixed cupcake dough should be like sour cream, or a bit looser. If it’s any thicker you’re likely to have a dry cupcake situation.

The following helpful ideas can be used with each other, meaning you can use more than one idea, depending on what you have available in the kitchen.

Be sure to add enough eggs

When you add eggs to a cake they do three things: bind the batter, add moisture, and depth of flavor. So if the recipe you’ve made came out a little dry, add an extra egg next time and is should be a little better.

Milk adds a lot of moisture to a batter and thins it out, so do not add too much. Some recipes will ask for milk, some will ask for yogurt, or buttermilk. Be careful how much you add because you risk getting a batter that’s too loose.

Oil is meant to add extra moisture, but it won’t thin out the batter as much as milk. It’s usually a good addition, provided it’s a neutral oil. Never add olive oil to anything sweet, you can end up with a vaguely bitter aftertaste.

Butter is usually mixed into cupcake batter, but you may need to add more if the current recipe doesn’t produce a moist enough batch. Though you may just want to add a tablespoon or two of oil instead of more butter.

Fruit juice does the same thing as milk, and it may be appropriate for some recipes. Keep in mind fruit juice is usually sweetened, so you’re also adding some more sugar to the recipe.

If the recipe itself is perfectly good then it may be the bake time and temperature. Even if you’re baking cupcakes, they should still be exposed to the same temperature as a regular cake batter.

So preheat your oven to 180 C/ 356 F, and check on the cupcakes about 15 minutes after you’ve popped them in the oven. Take a clean toothpick and insert it into the middle of a cupcake, towards the middle of the tray.

If the cupcake is done, the toothpick come out dry. You can run it across your lip to feel if it’s truly dry. If you see it’s sticky it may need 2-3 more minutes.

Never check at the edges of the cupcake, or the cupcake tray, because that’s where the most heat is. This also works for cakes.

Why are my cupcakes so dense ?

Dense cupcakes can happen if you’ve added too much flour in the recipe, and/or too little leavening agent like baking soda. If your cupcakes are dense you can try adding moisture with simple syrup, or decorating with a very fluffy, light cream frosting.

Now let’s take a closer look at the flour and leavening agent problems, and how they can be avoided.

Too much flour or dry ingredients

To much flour, be it gluten free or not, is usually the case for dense cupcakes or cakes in general. Flours that do contain gluten are more likely to cause a dense cupcake, especially if the batter was overmixed.

If you notice your cupcake batter is thicken than sour cream (texture-wise) it’s likely going to turn out as a dry, dense cupcake. Mix in a bit of oil or milk or fruit juice, depending on the recipe.

Read Also: Are Cupcakes And Muffins The Same ?

Another problem is the leavening agent, or the lack of it. Usually you use baking soda, and it does a pretty good job at raising the dough or batter. But if you add too little you risk ending up with a dense, thick cupcake. Try adding half a teaspoon more to the next batch.

Another option is to add in very well beaten egg whites. Instead of mixing the eggs whole, separate the whites from the yolk, and beat the whites like you would for merengue. Add most of the sugar to the egg whites as they beat, and the rest to the yolks.

You then need to fold the egg whites into the rest of the batter, slowly and with care, as not to deflate them too much.

And hopefully now you won’t get dry, dense cupcakes. Getting the perfect recipe isn’t as easy as it sounds sometimes. Mishaps are likely to happen, so don’t worry if one batch comes out a little weird. Simply decorate them with something creamy and light and they’ll be fine.