Are you a white chocolate lover ? It’s really one of the most interesting sweet out there, with a hotly debated status. Is it or is it not chocolate ? And if it is chocolate, why is it white ?

We don’t know about you, but when we were young white chocolate blew our minds. Why was it white ? Did you ever stop to think about it ? Well, now we’re in the position to actually explain this to anyone, but especially to our flabbergasted young selves. If you’ve ever wondered why white chocolate is white, read on. 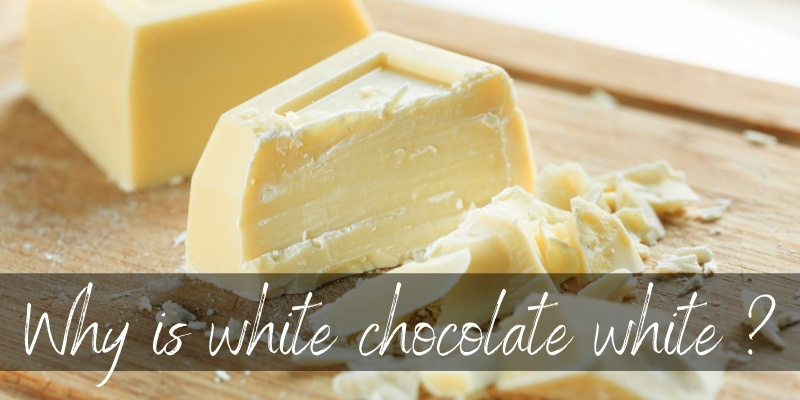 Why is white chocolate white ?

White chocolate appears white because it has no cocoa solids, only cocoa butter which is creamy white in color. The remaining ingredients are powdered milk, sugar, and a bit of vanilla. All of these are white or creamy white, and combined they make for a decidedly white looking chocolate.

This also affects the final flavor of white chocolate. Cocoa butter does taste like cocoa, but it’s drowned out by all the powdered milk and sugar and vanilla. As for how much cocoa butter is in there, it must be at least 20% and at least 14% total milk solids.

Of course, white chocolate may also contain other fats and ingredients, like palm oil or coconut oil, emulsifiers, no more than 55% sugar, and any flavoring or filling.

So because of its ingredients, white chocolate looks incredibly pale for a bar of chocolate.

But in our very personal opinion, white chocolate is still chocolate, albeit a little different from what we’re normally used to. We’re particularly fond of chocolate bars that mix milk and white chocolate.

Well if white chocolate isn’t real chocolate, why is it marketed as chocolate ? Probably because it’s simpler to label it that way, and it’s also available for those who have a chocolate allergy. Depending on the exact reason you’re allergic to chocolate, you may still be able to eat white chocolate.

If the cocoa solids are the problem, then white chocolate should be okay since it has no such thing. If your allergy is severe, it may still be triggered by the trace amounts of theobromine and caffeine present in cocoa butter.

Or, you could try carob chocolate. Carob is a pod related to cocoa pods, tastes similar, and has no caffeine. We imagine there is such a thing as caffeine-free chocolate made from carob powder and cocoa butter.

Why is white chocolate ganache yellow ?

White chocolate ganache ends up yellow or light cream because it contains a lot of milk and milkfat, which is always going to be a light yellow or cream. You also use cream when making ganache, which is also pale yellow in color. Once everything heats up, the milkfat dissolves and gives everything a yellow hue. 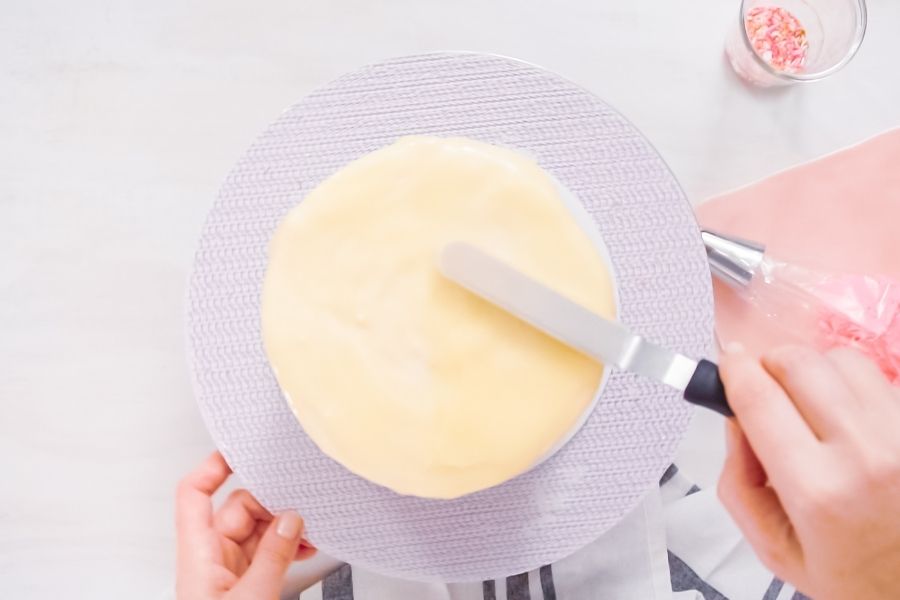 If you want your ganache to be opaque and white, you will need white food coloring. Because white chocolate has no cocoa solids it’s going to look a bit translucent, especially when you pour it over a cake. You can either color it, or only melt the chocolate and get a thicker ganache.

Whenever you’re making white ganache, melt the chocolate first, and then add a bit of hot cream. White chocolate is very thin when melted and you risk making the ganache runny if you add what would be a normal amount of cream.

Always use less cream than you’d want, this way you can actually do something with the ganache afterwards. But if you’ve already made it runny, you can add more chocolate chips or squares until it thickens, or add a lot of powdered milk.

There’s not much else you can do, aside from making it too thick and then just thinning it out.

Why is white chocolate so sweet ?

White chocolate is so sweet because it can legally have up to 55% sugar, and the powdered milk it also contains is kind of sweet on its own. All in all, white chocolate is overly sweet due to its recipe.

You may have noticed that some of these go past 55% sugar. We’re not sure if the sugars listed are just added sugar, or the total sugars (added and the natural sugars in milk). The end result is the same though, a very sweet chocolate.

Is it safe to eat chocolate that turns white ?

If you’ve got a dark or milk chocolate and it’s now looking kind of white, it all has to do with the fats present in chocolate. If the chocolate is very old, it will turn rancid and it will look pale but won’t bloom very much. But that takes a lot of time to happen.

It’s more likely that your chocolate was stored in a very cool place like the fridge, or first in a hot place and it melted a little, and then it solidified again. It will look matte and have white spots all over it. It’s fine, it’s just the fats separation from the solids, but they’re not rancid.

That is chocolate bloom, and you can look it up for yourself. The photos you’ll find are probably very similar to the chocolate you have right now.

If you case is indeed chocolate bloom, it should be flat, and in a thin layer, If it’s in clusters and raised, it might be best to throw it out.

Can you mix white chocolate with dark to get milk chocolate ?

You can mix the two chocolates but it won’t really result in milk chocolate. The main problem here isn’t in the ingredients, but the way they’re handled.

It’d be more of a thinned out, pale dark chocolate. A better idea would be to make a two colored chocolate, like a spotted chocolate or a marbled one.