With the cooler temps and the holidays right around the corner, seasonal drinks are already on our minds and hitting the shelves in various stores. Our favorite holiday drinks, eggnog and boiled custard, are two of the most prominent. Some may start to wonder what exactly boiled custard and eggnog is?

Aren’t they the same drink? Well, no. Boiled custard and eggnog share many key ingredients, including a milk substance (milk, half and half, cream), sugar, eggs, and vanilla. But the two drinks have a few key differences. 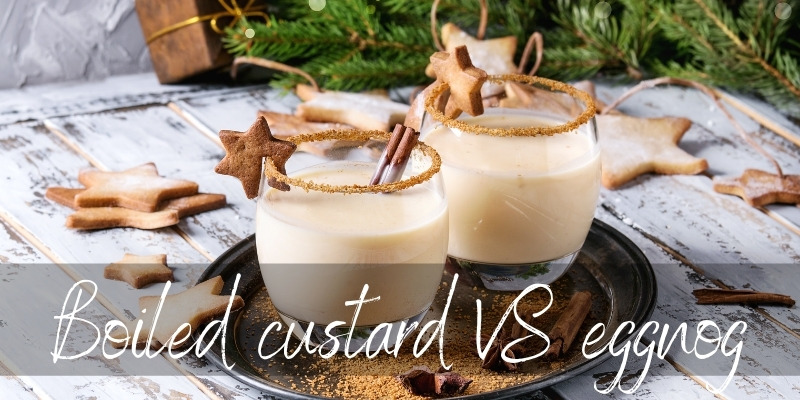 The main differences between boiled custard are the texture, flavor, and serving temperature.

Boiled custard is thick, because the yolks have been cooked through, while eggnog or much more liquid and hasn’t been cooked. For this reason eggnog is served ice cold, while custard can be both cold and warm (warm is traditional).

And finally, boiled custard has a simpler taste, more towards sweetened vanilla milkshake. Eggnog is spicier, often made with cinnamon, nutmeg, and mace.

There can sometimes be alcohol in eggnog, which folks either love or hate. There is never any alcohol in boiled custard. Now let’s explore these differences in detail, shall we ?

The difference in taste

Although these two holiday drinks have similar ingredients, their tastes are far from being the same.

Boiled Custard is a holiday drink and tradition from the South, and has a lighter taste when it’s compared to eggnog. It’s flavors are similar to a watered-down vanilla milkshake, but with a whipped and thicker texture.

The usual flavoring for boiled custard is vanilla, with the few exceptions when a bit of cinnamon is added as well. It’s a very light and tame sweet drink.

Eggnog has a sweeter taste than boiled custard, and some say it tastes like ice cream in a melted-liquid form. When alcohol is added to eggnog, the taste of the drink changes, and turns into a more exotic flavor, with a complex and spicy tang.

Most of the time eggnog has cinnamon, mace, nutmeg, and vanilla added for flavor in varying quantities. And the flavor of the alcohol will change things up, the most common being rum. Not much, just a splash.

Read Also:How To Know When Scrambled Eggs Are Done

Eggnog and boiled custard are very different from one another in the way they are prepared. First off, one is heated and thickened, while the other is whipped cold and is about as thick as heavy cream.

Boiled Custard is prepared with a double boiler. Its ingredients include sugar, salt, eggs, hot milk, vanilla, and flour or cornstarch. Boiled custard gets its thickness by adding cold water and extra flour (or cornstarch) to the original mixture. Its usually served warm and is almost as thick as pudding.

Eggnog’s ingredients include raw egg yolks, milk, sugar, heavy cream, and, a spice (nutmeg, cinnamon, or vanilla). Of course there are plenty of recipes where folks use hot milk to mix the egg yolks, which also cooks them through. Not everyone is a fan of the raw egg method.

And finally you can add an alcoholic beverage- brandy, rum, cognac, or whiskey. Whichever you like will work well, because there’s no need for a lot of alcohol.

Eggnog is usually served cold, so be sure to chill it in the fridge completely. 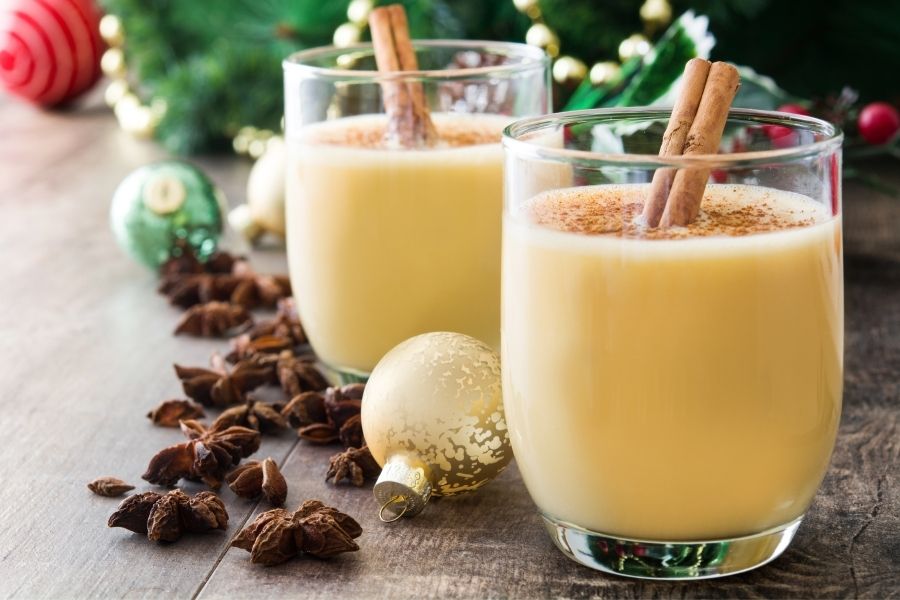 How to store eggnog and boiled custard

If you have too much eggnog or boiled custard there are plenty of ways to store them. We recommend using the fridge every time, just to make sure your drink will keep fresh as long as possible.

If unopened, canned eggnog can last up to 5 months in the refrigerator. However if you’ve opened it, eggnog lasts up to one week in the fridge. We recommend you put some really good plastic wrap over the top to seal it.

Refrigerated, store-bought eggnog lasts about 3-4 days, whether it’s been opened or unopened. This is mostly because it’s raw egg, so it won’t last all that much.

Homemade eggnog lasts about 3 days when stored in the refrigerator. Again, be sure to use some plastic wrap over the top or use an airtight container.

Boiled custard should be refrigerated in a glass container and it will last 2-3 days before starting to release moisture.

How to make eggnog last longer

Did you know, if you store eggnog properly it can last for a whole week after it’s “best by” date? To extend the shelf-life of your eggnog, follow these simple tips:

Can you freeze eggnog ?

You can freeze eggnog but will be very disappointed by the result. Once frozen and then defrosted, the texture of the eggnog will change dramatically. It will turn clumpy and have a different consistency.

But rest assured eggnog can be kept in the freezer for up to three months past the expiration date, and still be safe to consume if you’re fine with the texture.

Can you freeze boiled custard ?

You can freeze boiled custard little by little and get a very nice ice cream texture. You’ll have to keep taking it out to mix ever half hour, otherwise you’ll only get ice crystals. But if you do it like this you’ll get a nice after-dinner dessert !

How to tell if eggnog has gone bad

A lot like regular milk, you can tell if eggnog has gone bad if it has an “off” odor with a sour smell, and if it has curdled or has lumps in it. Eggnog also shows signs it is past its expiration date when it’s color changes from a whiteish, beige color to a different color, like yellow or light brown.

Unfortunately eggnog doesn’t have the best shelf life if made with raw egg, so it’s best to discard that version of eggnog the following day.

How to tell if boiled custard has gone bad

Boiled custard will show signs that it has gone bad when it’s smell has a weird odor and the custard becomes slimy. You’ll notice lots of moisture on the top of the custard, and a crusty texture towards the edge.

Can you substitute eggnog for boiled custard ?

Yes, you can substitute eggnog for boiled custard if your eggnog is made with cooked egg yolks. Tastesbetterfromscratch has a great recipe for that, and you need to be careful about a few things.

If you want to replace boiled custard, make sure your eggnog isn’t as spiced as usual and do not add alcohol.

If you want to replace eggnog, then add a bit more spices. we’re not sure if alcohol would mix well into boiled custard, so we’ll let you decide.

In any case, true eggnog or boiled custard fans will notice the swap. But if all you need is a nice, sweet, creamy drink to sip on then you definitely won’t mind the swap.

Spices you can use for eggnog and boiled custard

Give your traditional eggnog or boiled custard recipe a kick by using a different spice! The usual spices we use for classic eggnog and boiled custard are vanilla, nutmeg, and cinnamon.

However, some other spices you can use to give these holiday drinks a fun taste are: 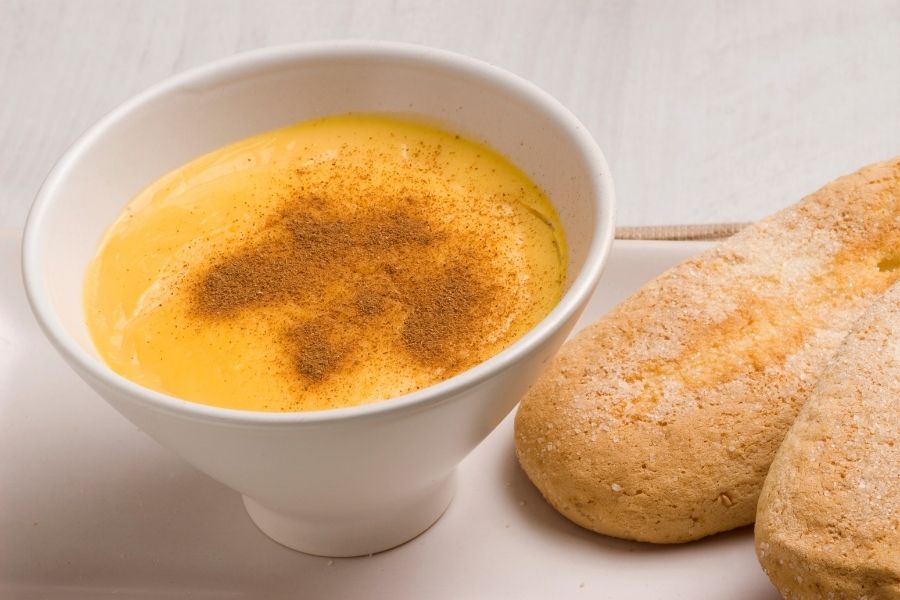 Other ingredients to add to eggnog and boiled custard

To give your eggnog or boiled custard a different taste, think about adding the following ingredients:

When we think of eggnog and boiled custard, we automatically think of the winter holidays. The three go hand-in-hand, and they’re a delightful treat we crave around Christmas time.

These two drinks may seem the same, or even very similar to each other, but they’re far from it! Any other key differences between our two favorite holiday drinks we forgot to mention? Let us know!