Rice pilaf sounds like an exotic and complicated rice dish, but in truth it’s really not that hard to make. And in terms of ‘exotic’, it’s not that exotic either, since most countries have some sort of pilaf recipe in their traditional dishes. Even so, pilaf is still a wonderfully delicious rice dish that manages to surprise many people when they first have it.

So what is rice pilaf, anyway ? And do you cook it any way special ? Do you need some special rice for it ? This is what we’ll be focusing on today, and also troubleshoot some of the most common rice pilaf issues people run into. 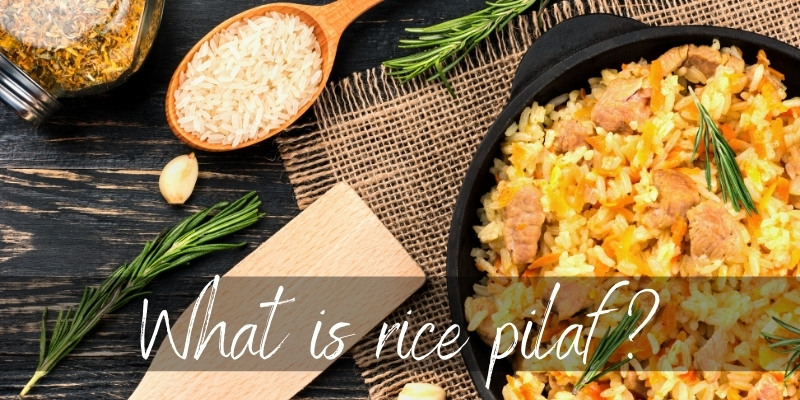 What is rice pilaf ?

Rice pilaf is a rice-based dish that involves lightly frying the chopped onion in cooking oil, then adding the uncooked rice and a broth (meat or vegetable) and simmering the rice until fluffy and tender. Rice pilaf is meant to turn out non-sticky, so the rice is always washed before cooking and long-grain rice is preferred.

This method of cooking rice – lightly frying, then simmering in broth – is supposed to keep each individual rice grain intact and perfectly cooked on its own. It differs from steamed rice as it’s more flavorful due to the added oil, onion, and any other spices (if any).

The appearance of rice pilaf ranges from white to a nice amber color, depending on how many beta-carotene-rich ingredients were used (like saffron, red bell peppers, carrots, tomatoes).

What kind of rice do you use for pilaf ?

Traditionally you need either basmati or jasmine rice for pilaf rice. This is because the rice is meant to cook evenly and separately, so you need a rice that is not overly sticky like arborio. That being said, you can still use arborio or a standard round grain tice as long as you thoroughly wash the rice before cooking it.

Another reason you may want to use the traditional basmati or jasmine is because they are very nutty and flavorful rice grains. This means your overall dish will have a flavor of its own, instead of being a base for other flavors.

The whole point of the pilaf is to get evenly cooked yet separate rice grains. Even so, if your rice ends up a bit clumpy it’s not the end of the world, it just means you need to adjust your technique.

How do you eat rice pilaf ?

Rice pilaf can be a meal on its own, or used as a side-dish. It really depends on how you cook it and what other ingredients you’re throwing into the mix. For example biryani is a type of pilaf that is a meal of its own, because the meat (whole goat) is cooked and served right along with the rice.

You can get the same effect by adding more vegetables and meat to your pilaf before it starts simmering. Some may have to be pre-cooked like beef or any red meat. And some may be added at the very last minute, like thinly sliced zucchini or corn.

And you can keep pilaf as a side-dish just as well, as long as the ingredient list is short and is mostly grains and vegetables. 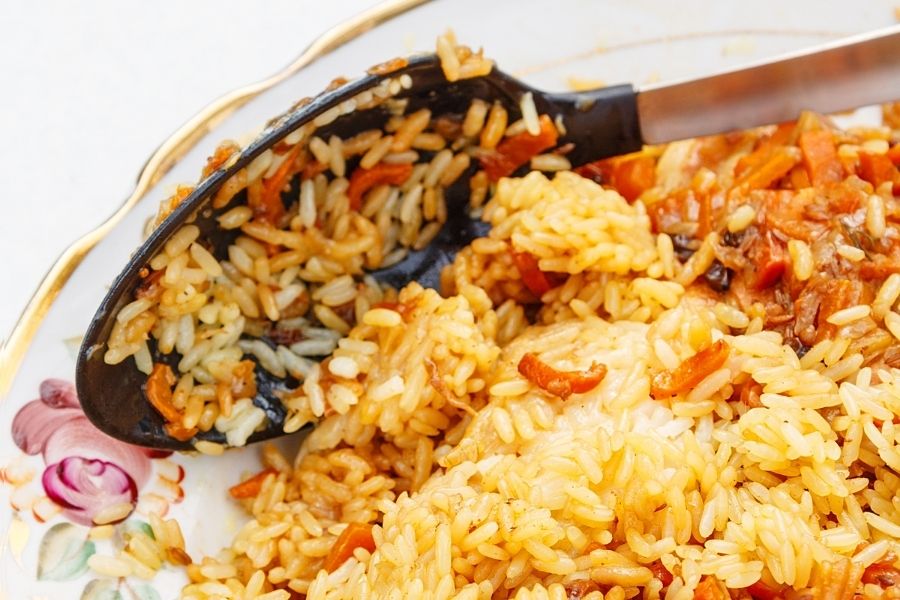 To make a quick and easy pilaf, you need a few ingredients you probably already have around the house. Here’s a quick guide for a very simple pilaf, and you can adjust the recipe for however many people you want to feed. This one yields 3 portions if used as a side-dish.

Finely chop the onion and carrot, and fry them in oil on medium-low heat. Once the onion and carrots are done (translucent and soft) add in your washed rice, and lightly fry it for a few seconds. You don’t have to truly fry it, it just has to pick up some flavor.

Add in 2.5 times as much water or broth, as you did rice. So if you were to add just half a cup of rice, you’d need a little over a cup of cooking liquid. The best ratio is 1:2 rice to water, but the extra half a cup is there to account for evaporation.

Add salt and pepper. Bring everything to a boil, and once it starts boiling reduce heat to the lowest setting possible. Do not stir or shake or move the rice in any way. Let it simmer on its own until there is no more water left.

You can check for water by (very carefully) tilting the pot to see if any water comes around the rice. If you tilt the pot almost completely to the side, it’s likely the water is completely evaporated.

This process usually takes about 20 minutes, more if you’re cooking in a very tall pot or a whole lot of rice. You can use a lid if you want, and in that case you should use a true 1:2 rice to cooking liquid ratio.

When the pilaf is done, let it sit for a few minutes alone, then fluff it before serving.

If going for a creamy pilaf, change the rice and stir

If you’re going for a creamier pilaf, something a bit similar to risotto, you need to change the recipe a little. You will need:

The recipe is mostly the same. Fry onions and carrots, add in washed rice, add water/broth, bring to a boil, simmer. Only this kind of rice may stick to the pot if you don’t stir it every now and then.

The result is a pilaf that is still fairly creamy but doesn’t feel mushy. This is the kind of pilaf that is more common in East European countries, and it’s usually prepared on a stove.

So we’ve given you the most basic of basic pilaf recipes. As you can see it’s more in the technique, as in not-stirring and using the appropriate rice to get non-sticky pilaf. But there are many variations to this recipe, and all of them add a ton of flavor. Here are a few examples:

Whatever you decide to add is likely going to be delicious, and you can transform the rice pilaf from a side-dish to a full-on meal of its own once you add some protein (be it animal or plant-based).

Why is my rice pilaf mushy ?

Too much water can lead to watery, mushy pilaf. And if you stir the pilaf, especially towards the end of the cooking, you risk breaking the delicate grains. This is especially true if cooking with basmati or jasmine, which are very long and thin rice grains when cooked so breaking them is easy.

To fix this, you can try simmering the pilaf for a little longer but it’s usually not going to completely save it. Next time be sure to use the 1:2 rice to water ratio for basmati (or 1:2.5 if not using a lid).

Why is my rice pilaf crunchy ?

Rice pilaf ends up crunchy because you’ve likely added too little water. Or, maybe you’ve added just enough but forgot to put the lid on, thus evaporating the water before the rice can be 100% cooked through.

This is a common issue and is easily fixable by adding a bit more water to the rice. We recommend heating fresh water separately and adding that to the rice. If you add cold water you halt the cooking process and end up spending much more time than necessary.

As for how much water to add, it’s safe to go with half the amount of rice you added. So if you used 1 cup of rice, add an extra half cup of water. To be extra-sure you can put the lid on, so the top part of the rice will steam and soften as well.

And that’s pretty much it about pilaf. It sounds intimidating at first, until you actually try and make it for the first time and realize it’s got more to do with timing and exact measurements than anything else.

Once you’ve got the right rice – or the right amount of water for that rice – you’re good to go. You can easily experiment with different flavor and ingredients as you learn how to cook the best pilaf for your tastes.