Bananas are a well-known fruit, and so are strawberries. You’d think there’s nothing left to discover about them.

Oh boy. You’re in for a treat.

As it so happens bananas are hiding something from us, and we’ve been oblivious to this. Until now.

Confused ? So were we. But a little digging got us the right info on exactly how and why bananas are berries, plus a few other such treacherous fruits. 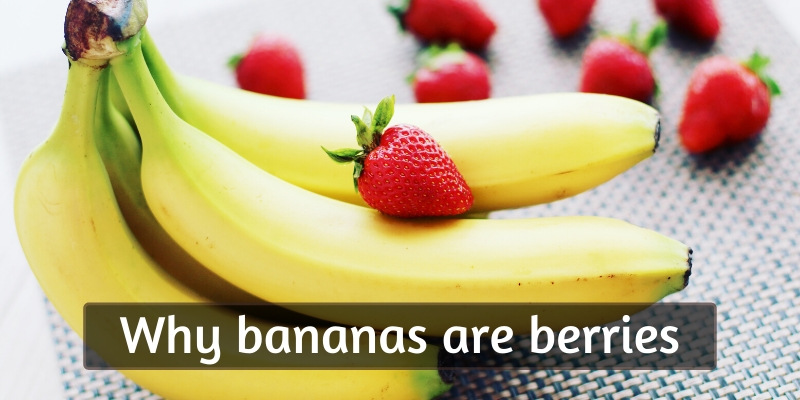 Table Of Content show
1 Why are bananas berries ?
2 What is a berry?
2.1 Strawberries are complicated
3 Botanical VS culinary berries
4 What other fruits are not berries, but we believe they are?
5 Conclusion

Why are bananas berries ?

Bananas are indeed berries. The reason behind this is actually science ! The branch of science named Botany that deals with plants, vegetation, flora and other assorted greenery.

As it happens, botany has cataloged bananas as berries, and it has a very good reason for it.

Berries are any fruit that:

No stone or pit ? Check.

Single ovary flower ? Check, the black bit at the end of the banana is where the petals actually fall off of. Take a look at the image below and you’ll see the banana flower and a few banana hands growing. 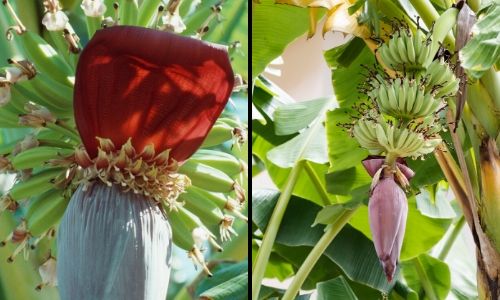 Banana flower, with grown bananas at the top. Note the light yellow flowers under the big, red petal.

Still want a bit more explanation ? We understand, we wanted to really explore the topic to the last bit when we first found out. So to better understand, let’s take a closer look at what true berries are, and use strawberries as an example case.

Read Also:Is Rice A Fruit Even ?

What is a berry?

Berries don’t have a very complex structure, but it’s pretty specific. Definitely more specific than the definition of botanical fruits – any produce that has the seeds on the inside, including cucumbers, avocados and oranges.

To recap, a botanical (true) berry:

Those 3 layers vary from berry to berry, but they’re present in bananas. Again, check the image below for a visual explanation. 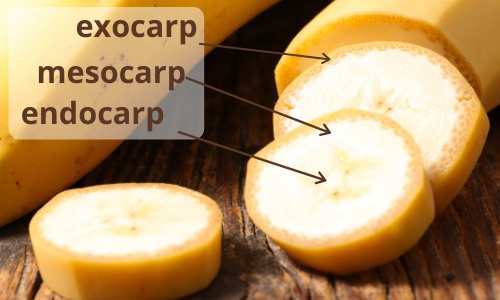 Bananas aren’t the only berries that fit this structure. Cucumbers are on this list, as are tomatoes, grapes and eggplants among others.

Alright, so what’s wrong with strawberries ? Well, we’ve made a whole article that goes in-depth – it’s right here – but we’ll give you a brief rundown.

First, the red fleshy part of the strawberry isn’t actual fruit, it’s more like the ‘cushion’ the actual strawberry fruit sits on.

Second, the green seeds we see on the outside of strawberries ? Those are the real berries, and also the botanical fruit.

Third, botanical berries must first meet the criteria for being a botanical fruit – have seeds on the inside. Strawberries have their seeds on the outside.

So the red part of strawberries ? That’s actually a thing called accessory fruit. The cashew is in the same boat actually, with the cashew itself being on the outside of the cashew ‘apple’.

Dazed ? We understand, but we’re going to try and put things into perspective here so they start to make more sense.

There are botanical berries, and there are culinary berries.

Botanical berries are the one science says are berries.

Culinary berries are the ones folks think are berries, since ages ago.

The reason there’s a big chasm between botanical berries and culinary berries is that the word ‘berry’ was in use long before botany became a thing and developed its definitions. 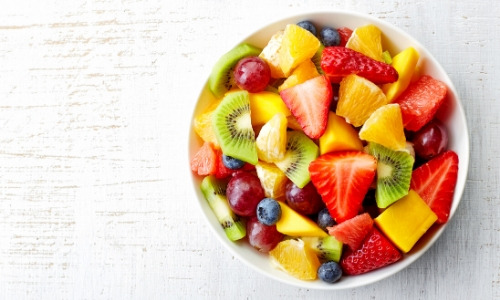 Back to bananas here, we normally think of them as fruits. Just random fruits, no one thinks about it too deeply.

But as it turns out bananas are botanical berries and this tells us we really need to broaden our minds in terms of how we define things. Otherwise the following examples of other berries might just make you frown for the rest of the day.

What other fruits are not berries, but we believe they are?

Examples like tomatoes being berries – single ovary flower, seeds on the inside, fleshy fruit, no stones.

Blackberries and raspberries, not berries. Why ?

First, they’re made from a cluster of flowers and grow as an aggregate, segmented fruit. The flower ovaries are all on the same stalk and produce a unified but segmented fruit.

Also they produce a really tough (albeit small) pit or seed that only manages to get in the way when you’re trying to enjoy a bowl of forest fruits.

Want to know a berry that’s actually a berry ? Take a look at blackberries. And any form of cranberry or currant.

Want to know something else that’s gonna blow your socks off ? When a cashier scans a barcode, it scans the white stripes, not the black.

Now that you’re all dazed and confused, try and remember – bananas are berries, strawberries aren’t, and it all makes total sense.

The conclusion is that yes, bananas are berries and strawberries aren’t but this is just from a botanical point of view. This information is useful but it will not have a real-life purpose because if you correct someone who says that strawberries are berries, you will most probably annoy them and look like a nerd, so keep it for you.