If you’re a big fan of lasagna but absolutely cannot stand the thought of tomatoes, or cannot find any, then you’re in dire need of a tomato substitute. Maybe your case isn’t as dire and you simply need something else to bulk up a ratatouille. Or, maybe you’d rather swap the tomato in a salad with something else. But what ?

Here comes a list of the best tomato substitutes we could think of ! Some of these may be obvious, and some may surprise you. It really depends on what you’re using the tomatoes for, because each of these works a little differently. So let’s take a look. 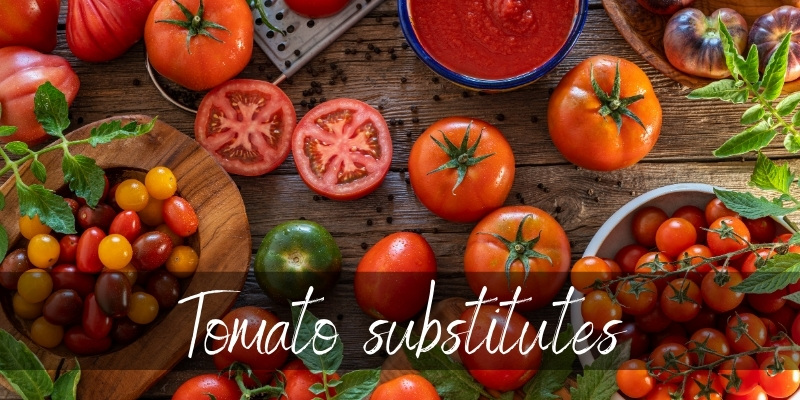 The best tomato substitutes are tomato sauce or paste, red bell peppers, eggplants, sweetened vinegar, low sodium soy sauce, olive paste, and zucchini. You may use several of these combined, and some of these are even better if you roast them beforehand, like eggplant or bell pepper.

If your issue with tomatoes is that they are nightshades, we’ve provided you with non-nightshade options, as well as very flavorful ones. When replacing tomatoes in a recipe we need something that is:

Some of the options on the following list are all three, and they may be your saving grace, and some may be something completely unexpected. Always remember that tomatoes bring flavor, but you can obtain a great flavor with the aid of other spices as well. Now let’s look at the substitutes.

If you need to substitute fresh, raw tomatoes then you can try tomato paste or tomato sauce, to bring a similar flavor. You can use the paste or sauce to invent a sort of salad dressing, or sauce for a roast, or simply to flavor a broth. For texture and bulking you can try any of the other substitutes on this list.

Keep in mind that fresh tomatoes are, well, fresh. So a tomato sauce will bring depth of flavor without too much zing. You may want to add a bit of lemon juice to brighten the flavor. 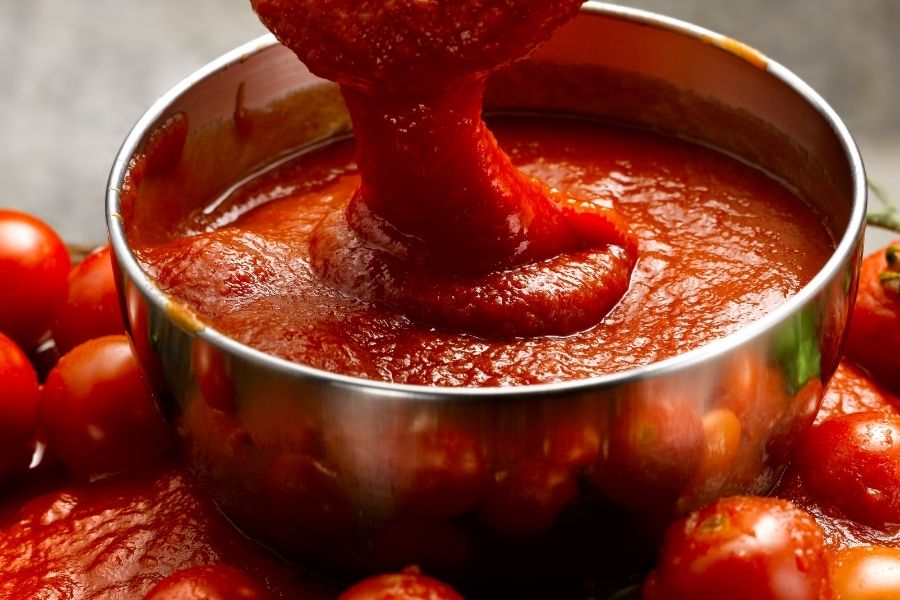 Red bell peppers have that beautiful look that can easily mimic tomato slices, without the seeds. And if you roast the peppers and them make a sort of salad or sauce, they can easily be added in place of tomato sauce.

They have a different flavor, yes, and they’re even a bit sweeter than tomatoes. They’re also more earthy, so they can provide a really nice background flavor for a roast, or in a stew. If you add chunks of roast bell pepper to a salad with white cheese and cucumbers you get a really nice combination.

If using red bell peppers for ratatouille, you may want to cut them lengthwise, instead of transversal. This way you get big slabs of bell pepper, as opposed to empty circles.

Eggplants are common replacement for tomatoes. They bring a nice flavor, even if it’s a different one from tomatoes. Roast eggplant is particularly delicious and earthy-umami. And due to its texture, cooked eggplant of any kind will bring a creamy finish to any dish.

If you’re substituting for ratatouille, keep in mind they will get very. very soft. In a salad they’re not a good deal, since raw eggplant has no flavor and feels like a dense sponge. It’s really much better once you cook it.

4. A dash of sweetened vinegar

Sweetened vinegar is a nice choice to bring some sharpness to a dish, and it also bring just a bit of sweetness like a tomato would. We recommend ACV, instead of any other vinegar, if you can help it. Only use a little at a time, because you may just notice the smell and taste of vinegar more than the acidity.

Low sodium soy sauce brings a nice umami flavor, very similar to roast tomatoes, and a bit of color as well. Make sure you get the low sodium kind, or don’t add any salt until the last tasting. And make sure it’s actual soy sauce, not a sauce based off soy sauce like Teriyaki or wok sauce. Those have extra flavorings and sugar added.

You can use low sodium soy sauce in several kinds of dishes, in whatever portions you like. It will darken the food a little, and give it a nice flavor.

Kalamata olive paste is the most flavorful of the olive pastes, and it’s also fairly salty. It’s close in color to roast tomatoes, and while it does taste very different it still brings a nice, full flavor to any dish. Of course, you can get a milder paste by looking for black olives.

When you do use olive paste – also called tapenade – keep in mind you won’t escape the olive flavor, so be sure you actually like olives before trying this. 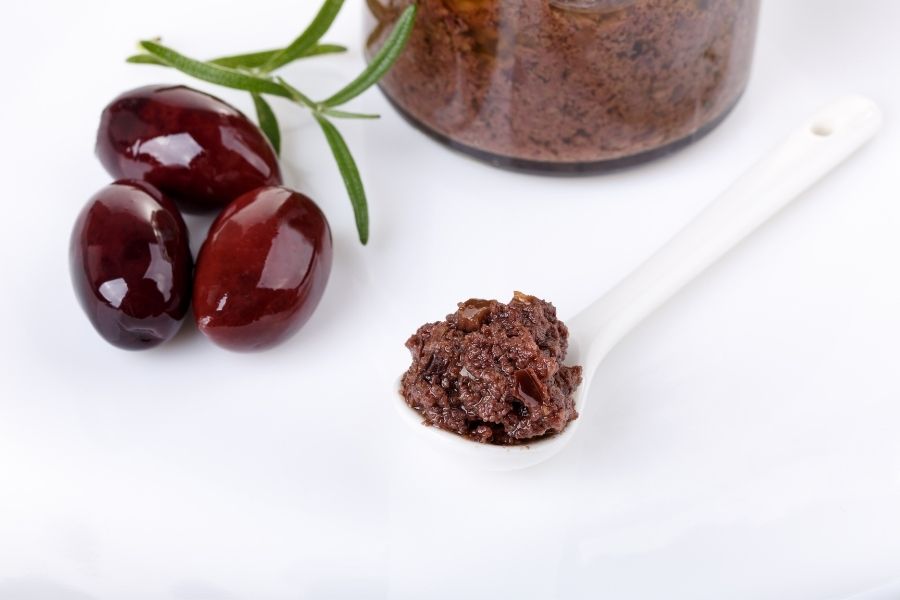 Zucchini is a great choice for tomato substitute, especially for bulking a recipe or using for texture. It’s not red, not even orange, but it can easily come to look the right color by mixing in some roast pepper and that nice kalamata tapenade we mentioned earlier.

The great thing about zucchini is that it has no distinct flavor, so you can season it however you like. This one goes great in everything. it could be raw in a salad, sliced thick in a roast, stuffed and baked, or even just extra veggies in a casserole.

Whenever you need to substitute tomatoes you’re wondering how you can approximate the flavor of tomatoes best. Well, aside from using something like red bell pepper and a bit of acidity, you need to get the other seasonings right. You see, tomatoes are usually accompanied by other spices or herbs, and getting those right rounds out the tomato flavor, even if you have no actual tomato in there.

Remember to season and spice !

Fresh basil or oregano are crucial for many tomato recipes, especially on a pizza or somewhere you’re using tomato sauce. So no matter what you choose to use in place of tomatoes, be sure to add at least one of these herbs. Rosemary is also a nice touch.

Onions are commonly used alongside tomatoes, in smaller or larger quantities but they are there. It could be a tomato sauce, or a salad, or a casserole, there will be onions with that tomato.

Fresh garlic is also added often, though not for each and every meal. But using at least one of these, even in a small amount, will really help bring the tomato flavor closer.

Olive oil is a must

You don’t really need to do this if you’re using olive tapenade, there will be enough olive flavor in there.

How to fake a tomato paste

If you’re looking for a tomato paste fake, you can try sauteeing and them simmering the following:

The result should be close in color and texture to tomato sauce, and it can be used in basically any way you like. If you cannot go near any nightshades at all, swap the red bell peppers with zucchini. It won’t be a bright red, but it will be close in color.

Some folks recommend adding beet juice, the problem is that beets are purple-red, so your fake tomato juice will be pink, instead of red-orange. It’s better to simply caramelize the carrots a little and leave the color at that.